How Much Do You Know About COVID-19? Take This Quiz

How Much Do You Know About COVID-19? Take This Quiz

Doug Badger is a senior fellow in the Center for Health and Welfare Policy at The Heritage Foundation.

COVID-19 isn’t even the leading cause of death among the elderly, although it accounts for more than 9% of deaths among those 65 and older.

COVID-19 is not even among the 10 leading causes of death among school-aged and preschool-aged children.

People under 45 (58% of the population) account for less than 3% of coronavirus deaths.

False. It’s not even close. As of July 25, the most recent date for which Centers for Disease Control and Prevention data is available, there were 135,579 deaths related to the contagion, less than 10% of the more than 1.5 million deaths that have occurred in the U.S. so far this year.

COVID-19 isn’t even the leading cause of death among the elderly, although it accounts for more than 9% of deaths among those 65 and older. Cancer and heart disease continue to claim the most lives by far in this age group, while unintentional injuries cause the most deaths among people under 45.

False. As of Aug. 3, there were 158,706 COVID-19-related deaths nationally, according to Worldometer’s data, the most in the world. But with a population of 330 million, the U.S. is also among the world’s most populous.

The more accurate metric of comparison is the COVID-19 death rate per million population. By that standard, the U.S. ranks eighth among countries with populations of 1 million or more, behind Belgium, the U.K., Spain, Peru, Italy, Sweden, and Chile.

False. As of Aug. 2, the U.S. had performed nearly 181,000 tests per million population. That placed us ninth in the world, behind the United Arab Emirates, Bahrain, Denmark, the U.K., Singapore, Russia, Lithuania, and Israel. All of those countries except Bahrain reported fewer cases per million population than did the U.S.

COVID-19 is not even among the 10 leading causes of death among school-aged and preschool-aged children. Ironically, while children under 15 account for less than 1% of COVID-19 deaths, and the elderly account for 80% of deaths, public debate centers on reopening schools, not on making nursing homes safer.

5. True or False: Sweden, the only country in Europe that didn’t impose a lockdown, suffered far more COVID-19-related deaths, on a population basis, than any other European country.

False. Supporters of lockdowns have repeatedly decried Sweden’s refusal to impose them on its population, forecasting an epidemic of medieval proportions.

The number of confirmed cases in Sweden peaked on June 24 (later than in most European lockdown countries) and has declined sharply ever since. Sweden has had fewer COVID-19 deaths per million population than Belgium, the U.K., Spain, and Italy, all of whom deployed widespread lockdowns.

False. If you got this one wrong, you’re in good company. White House coronavirus task force head Dr. Deborah Birx recently announced that the Sunshine State, along with Texas and California, was now one of “three New Yorks.”

The virus is spreading among Floridians, and the number of COVID-19-related deaths has been rising and will continue to do so. But as of Aug. 1, Florida’s deaths-per-million population (327) ranked below the U.S. average (475) and well below the rates in New York State (1,685) and the neighboring states of New Jersey (1,790) and Connecticut (1,243).

Equating the conditions in Florida this summer with those that prevailed in New York and the Northeast this past spring is recklessly inaccurate.

In fact, the list of counties with the most coronavirus-related deaths hasn’t changed all that much since late April, according to USAFacts.org data. Eight of the 10 counties that led the U.S. in deaths at the end of April were still on the top 10 list at the end of July.

New York City and surrounding counties in New Jersey and on Long Island filled eight of the slots on April 30 and still occupied six of them on July 31, including three of the top five. Only one county from Birx’s “three New Yorks”—Los Angeles County—made the list. 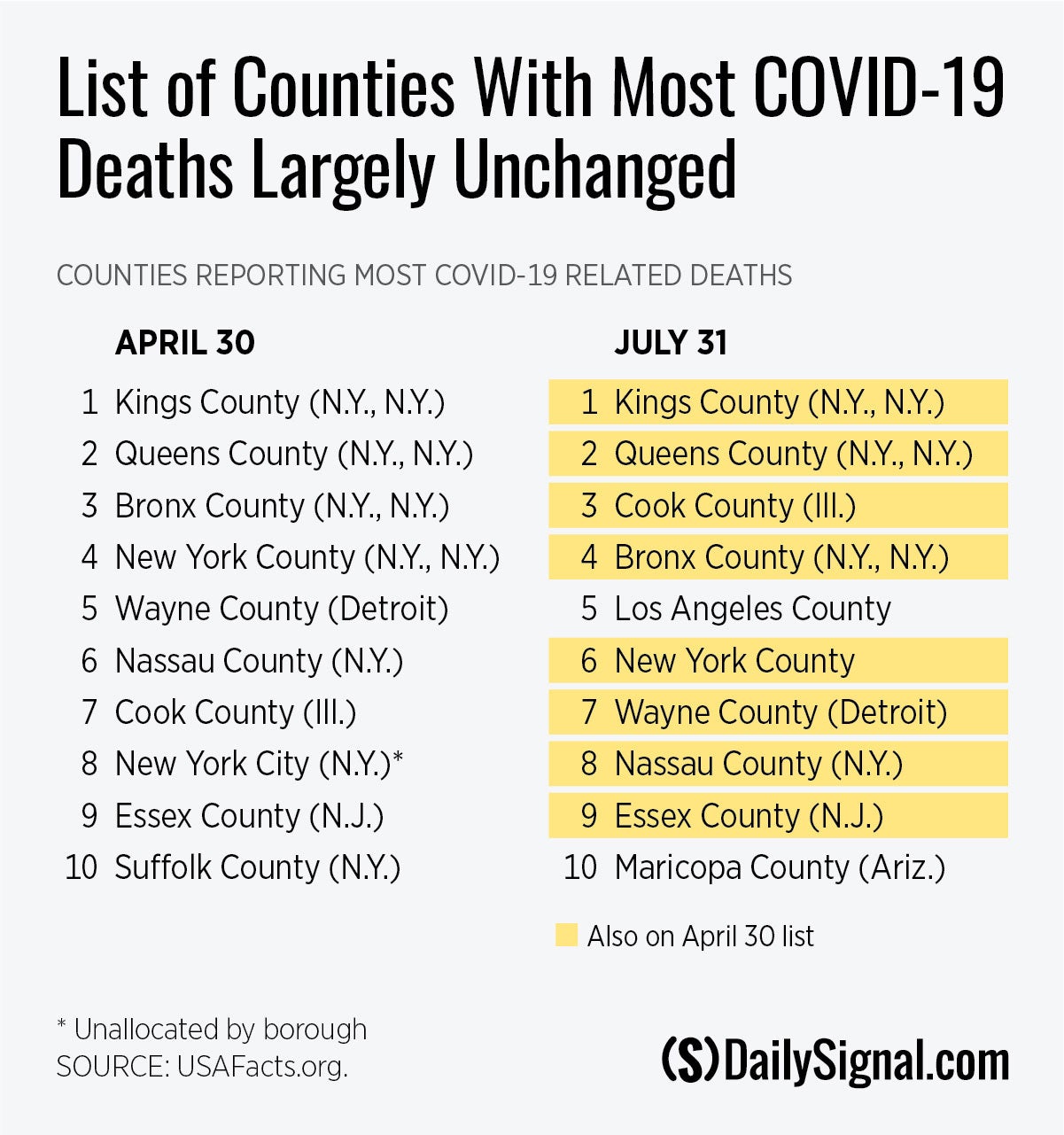 (d) Masks have taken on mythical proportions in the public imagination.

“I think if we could get everybody to wear a mask now,” CDC Director Dr. Robert Redfield said on July 15, “I think in four, six, eight weeks, we could bring this epidemic under control.”

First, there’s the imprecision of his forecast. (Does he think it’s four, six, or eight weeks? What does he mean by “under control?”) Then, there’s the utopian nature of the hypothetical (How would you go about getting everyone to wear a mask? All the time?) suggests that Redfield was making another of those unsubstantiated, off-the-cuff statements to which public health officials seem prone.

On the other side, social media resonate with warnings that masks deprive the body of oxygen. So, will wearing a mask prevent you from getting infected or send you into a stupor of hypoxia?

“Masks may help prevent people who have COVID-19 from spreading the virus to others,” according to the CDC. They don’t protect the mask-wearer, but they may protect others from the mask-wearer.

The CDC says that wearing a mask “may” have this effect because scientific certainty isn’t possible. You can’t conduct a properly controlled experiment that yields scientific proof that masks really help prevent the spread of the coronavirus.

If there’s no definitive proof that masks work, why wear them? Mostly, commonsense. Scientists seem fairly certain that COVID-19 is spread by droplets, although there’s some evidence it’s present in aerosols. Either way, it’s on our breaths.

There also is evidence that people who don’t know they’re infected can spread the disease to others. By imposing a physical barrier, masks reduce the speed and spread of our breaths. That’s thought to lessen the chance that a person who doesn’t know he’s shedding virus will spread the infection.

So, it’s a good idea to wear one—unless it sends you into a swoon.

False. A survey of 1,000 Americans by the international polling firm Kekst CNC found that most of us think that the virus has infected 20% of the population.

As of Aug. 2, Johns Hopkins University had tallied nearly 4.7 million cases, or about 1.4% of the U.S. population. Of course, many COVID-19 cases go undiagnosed, so the survey respondents may not be as far off as they seem.

It’s also worth noting that Americans aren’t alone in overestimating the extent of the pandemic in their country. The same survey found that people in the U.K., Germany, France, and Sweden also overestimated the percentage of their countrymen who had contracted the disease.

9. True or False: Everyone, regardless of age, who gets the coronavirus is equally at risk of serious illness and death.

False. COVID-19 is a serious disease primarily for the elderly, especially those in nursing homes.

As of July 25, the CDC’s most recent publicly available data reports that people 65 and older account for 80% of COVID-19 deaths, although they make up less than 17% of the population.

People under 45 (58% of the population) account for less than 3% of coronavirus deaths.

A recent study by Syracuse University researchers set out to estimate more precisely the age-related mortality risk of coronavirus infection. The researchers drew on data from studies performed around the world to estimate the number of people who have been infected with the coronavirus.

This group is larger than the number who have tested positive for the contagion. They found that the infection fatality rate—the percentage of people who have been infected with the virus (including those who are never tested) who die—is very different for younger people and older adults.

10. True or false: According to those same Syracuse University researchers, a person under 45 who is involved in an accident is three times more likely to die than a person in that same age group who contracts COVID-19.

True. That study compared the relative risks of death from accidental injury and infection with the coronavirus. Its authors estimate that people under 45 who have an accidental injury caused by something other than an automobile accident have 0.03% (3 chances in 10,000) of dying from that injury, compared with a 0.01% (1 in 10,000) chance of dying if they contract COVID-19. Those in that age group who are involved in traffic accidents face a similar 1-in-10,000 risk of death.

5-7 correct: Not bad. You understand the pandemic better than most.

8-9 correct: Very good. Getting just one or two questions wrong probably ranks you among the most knowledgeable Americans.

10 correct: Excellent. If you’re not too attached to your day job, you might want to apply to run the White House coronavirus task force.

This article has been corrected to reflect the accurate percentage range of COVID-19 deaths compared to all deaths in the United States this year.