How to Fight the War on Poverty 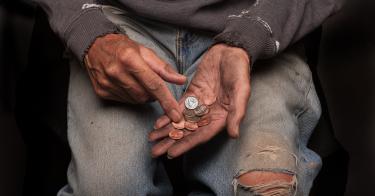 How to Fight the War on Poverty

We need to reverse the current system, which discourages work and penalizes marriage.
Copied

When President Lyndon Johnson launched his War on Poverty in the 1960s, he pledged to eliminate poverty in America. But more than five decades, several welfare programs, and $25 trillion later, the welfare system has largely failed the poor.

Currently, the United States spends about a trillion dollars a year on over 90 different federal, state, and local welfare programs. Yet around 12 percent of Americans are still considered poor.

We are clearly spending a lot of money so why do we still have such a high poverty rate?

The simplest answer is that the government does not count most welfare benefits as income when measuring poverty. That means taxpayers can spend and spend but the poverty rate will always seem to remain unchanged.

In reality, not even the government can spend a trillion dollars a year and have no impact on poverty. Once cash, food and housing benefits are measured accurately the poverty rate falls from 12 to four percent.

But, does this mean the War on Poverty has been a success? Not really.

In launching the War on Poverty, President Johnson declared that he wanted to address the causes, not just the symptoms, of poverty. He said he intended to shrink not increase dependence on government. His goal was to increase self-sufficiency: the ability of individuals to support their families without reliance on government hand-outs. And that should remain our goal today.

Unfortunately, by that very measure, the current welfare state is an absolute bust. What has gone wrong? The main problem is that our welfare system discourages work and it penalizes marriage.

Work and marriage clearly raise incomes but, more importantly, both are inherently linked to a person’s well-being and happiness. For example, marriage is the number one factor in promoting upward mobility for children. Because welfare is anti-work and anti-marriage, it inherently harms the very people it was supposed to help, ESPECIALLY children.

Why has this happened?

Sadly, the cycle continues today as many children who grow up on welfare eventually follow in their parents’ footsteps when they have families of their own.

We need to reverse the current system, which discourages work and penalizes marriage. Work is the fastest and most effective way to get out of poverty and become prosperous. Welfare programs should require those who can work to work or prepare for work as a condition of getting aid. And the substantial penalties against marriage – those should be removed.

Finally, it’s important to be transparent about the dollars spent and the benefits received – it’s hard to reform a government program when how much it truly costs and how many people it’s actually helping is not clear for taxpayers

Most Americans want a social safety net that helps those who can’t help themselves. As we wage the war against poverty for the next generation, let’s fight smarter.

Critical Race Theory Would Not Solve Racial Inequality: It Would Deepen It

Homelessness in America: An Overview