Don’t Believe the UN’s Propaganda About "Extreme Poverty" in the U.S.

Don’t Believe the UN’s Propaganda About "Extreme Poverty" in the U.S.

From these spending data, we are able to calculate alternative poverty metrics that are more representative of true living conditions.

Claims of widespread extreme poverty in the U.S. are based on faulty information.

The administration should also make a concerted effort to improve the accuracy of the official poverty statistics for the United States.

He further argued before the U.N. Human Rights Commission that “one of the world’s wealthiest countries does very little about the fact that 40 million of its citizens live in poverty.”

He is wrong on all counts.

Such claims do have a veneer of legitimacy, however, because when compiling the U.S. government’s official poverty statistics, the Census Bureau considers only the cash income each family reports in an annual survey.

Fortunately, the Census Bureau also conducts, on behalf of the Bureau of Labor Statistics, a survey of household expenditures, in which families are asked to report how much money they spend each month on each of up to 594 categories of purchases. Poor families routinely report spending an average of $2.40 for each dollar of official cash income.

From these spending data, we are able to calculate alternative poverty metrics that are more representative of true living conditions.

The contrast between the income-based and expenditure-based poverty measures becomes even starker at lower poverty thresholds of the type Alston has recently begun to popularize. 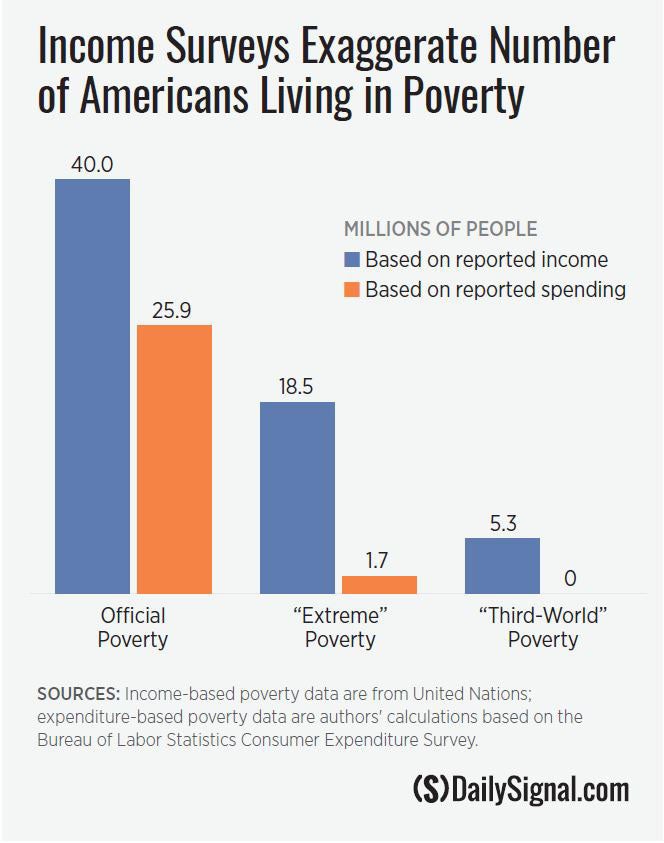 What about Alston’s most provocative claim that in the U.S. “5.3 million live in third-world conditions of absolute poverty”?

In response to this claim, the U.S. Mission in Geneva cited our recent work showing that, since 1980, only 175 of 222,170 households—1 in 1,270, or 0.08 percent—included in the U.S. government’s official Consumer Expenditure Survey reported spending less than $4 per person per day. At the more common $2 per person per day consumption threshold used by the World Bank, the figures are even lower, with only 66 cases—1 in 3,360, or 0.03 percent—of apparent third-world poverty.

The severe shortcomings of income-based poverty measures are made clear when one considers the actual living conditions of those whom Alston considers to be in “extreme poverty.” American families living in “extreme poverty” typically have air conditioning, computers, DVD players, and cellphones. They rarely report material hardships such as hunger, eviction, or having utilities cut off.

Claims of widespread extreme poverty in the U.S. are based on faulty information. They promote alarmism that generates pressure to increase welfare spending and benefits. But sound public policy cannot be based on misinformation.

Even worse, misinformation distracts attention from the real issues facing the welfare state: the prevalence of self-defeating and self-limiting behaviors such as low levels of educational attainment, low levels of marriage and work, criminal activity, drug and alcohol abuse, and poor home environments for children. These conditions generate a need for welfare assistance in the first place and undermine human well-being.

On June 19, when Ambassador Nikki Haley announced the withdrawal of the United States from the U.N. Human Rights Commission, she called the organization “a protector of human rights abusers, and a cesspool of political bias.” The Trump administration was right to make this decision.

The administration should also make a concerted effort to improve the accuracy of the official poverty statistics for the United States, so that our government will no longer provide misleading figures to be used by those who are biased against us. Then it will become more obvious to all that our current spending of $1.1 trillion on assistance to the poor each year is not, in fact, “very little.”