What Happens if the House Impeaches Trump? 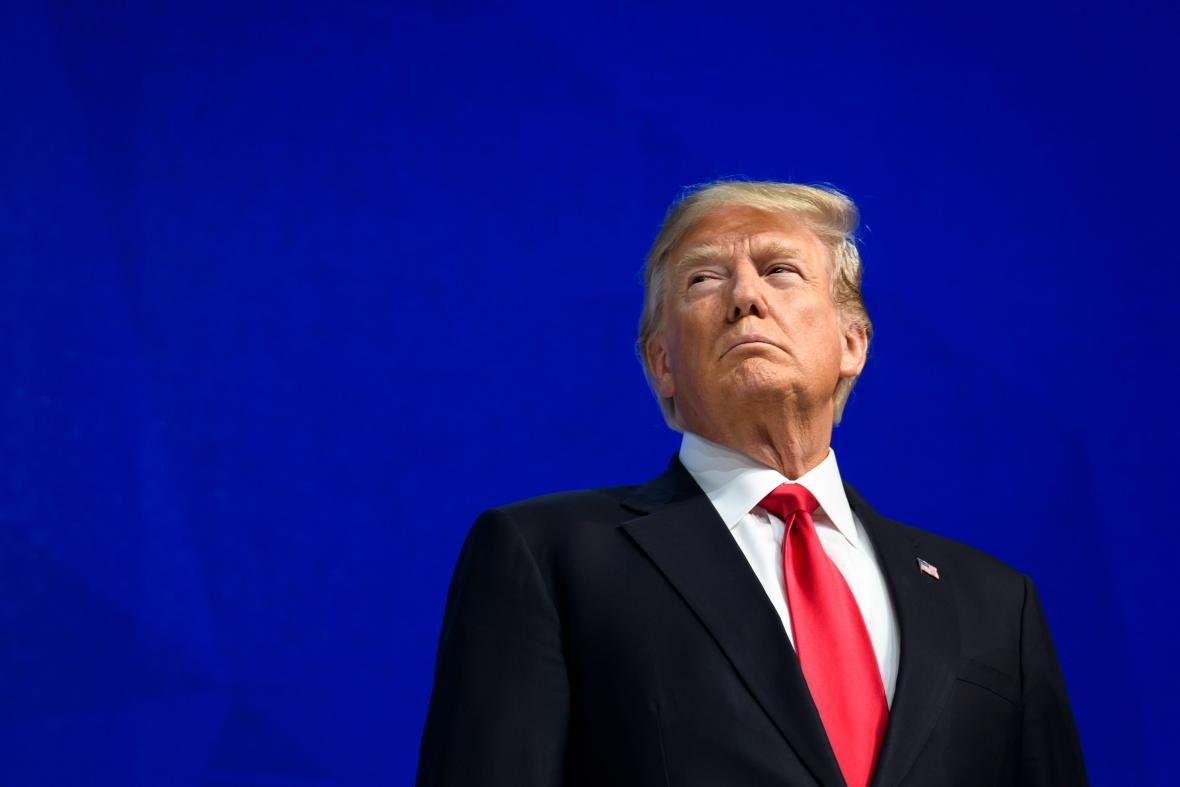 What Happens if the House Impeaches Trump?

Part one of a three part podcast series on impeachment
Copied

This week, in part one of a three part series on impeachment, Heritage expert Thomas Jipping breaks down what the impeachment process looks like in the House and the Senate, how America reacted the last time this happened, and if Congress should indeed go down this road.

MICHELLE CORDERO: From the Heritage Foundation. I'm Michelle Cordero and this is Heritage Explains.

REP. NANCY PELOSI: The actions of the Trump presidency revealed dishonorable fact of the president's betrayal of his oath of office, betrayal of our national security, and betrayal of the integrity of our elections. Therefore, today I'm announcing the House of Representatives moving forward with an official impeachment inquiry.

CORDERO: House speaker Nancy Pelosi's announcement last week kicks off a complex and enormously consequential process. In our nation's history only two presidents have been impeached by the House. Andrew Johnson in 1868 and Bill Clinton in 1999. But neither was convicted by the Senate, so they both stayed in office. I was in high school when Bill Clinton was impeached. I distinctly remember hearing about it on the news and hearing my family discuss the circumstances around his impeachment. And I have to be honest, it was not a pretty impression of our government for my young and impressionable mind. It forever changed the way I view Bill Clinton and politics.

GWEN IFILL: History unfolding in the nation's Capitol today as a somber House of Representatives voted for only the second time in American history to impeach a president of the United States.

PRESIDENT BILL CLINTON: I want the American people to know today that I am still committed to working with people of good faith and good will of both parties to do what's best for our country. To bring our nation together to lift our people up. It's what I intend to do for two more until the last hour of the last day of my term.

CORDERO: Here's where I want to dive in today. If the House of Representatives votes to impeach president Trump like they did with Clinton and Johnson, what happens next in the Senate? Remember Clinton was in his second term. Trump is just in his first, and it seems unlikely that liberals will relent. We're looking at what could be a very different scenario from what we saw in 99. Today in part one of a three part series on impeachment, Thomas Jipping, deputy director of Heritage's Meese center for legal and judicial studies is going to break down on a one on one level what the impeachment process looks like in the house and the Senate. How America reacted last time this happened and if Congress should indeed go down this road. Tom, where were you during the last impeachment?

JIPPING: Well, the last impeachment by the House was in 2010 and that was of a U.S. District Judge. And the House impeached him and then the Senate held an impeachment trial. The Senate did that with a committee of senators and the Senator that I worked for, Orrin Hatch of Utah, was the Vice Chairman of that committee. So I was the Deputy Chief Counsel of that committee and we worked for the better part of a year to preparing for and conducting the trial and then assembling a summary of the evidence for the full Senate.

CORDERO: So when it comes to the ins and outs of this process, you certainly have experience with that.

JIPPING: Well I do. I mean impeachment is the kind of thing where you, you hope you never have to do it. But it is in the constitution and it is an important process when it is necessary to do. So that's the last time, in fact, most of the officials impeached in American history have been judges only two presidents. Both of them were impeached by the House but not convicted by the Senate. So Andrew Johnson in the 19th century and then Bill Clinton both remained in office.

CORDERO: And I think that's where a lot of people really start to mix up the process. It's a known fact that Bill Clinton was impeached, but it starts to get a little cloudy. If you ask why he wasn't removed from office, it sort of feels like this really big thing that happened and then nothing happened.

JIPPING: Yeah. And people have heard the phrase, checks and balances, right? Many things in our government are started by either the President or maybe the House, but then there's another part of the government involved to. Either the Congress or the Senate. In this case, I mean America's founders were concerned that a hostile majority in the House, let's say, could just use impeachment as an opportunity to boot out a president that the American people had elected. So they had this two step process, the House impeaches but then the president or no one gets removed from office unless there's a trial in the Senate and it takes two thirds of the Senate to convict. So it is a two step process, and I think that makes sure that if we're going to get rid of somebody who we've elected, that it's going to be for serious matters, and it's really going to take a broad consensus of our elected representatives to do that.

CORDERO: So it's a simple vote in the House. And then you said a trial in the Senate. What does that trial look like?

JIPPING: And the parallel is a little bit like even what people might've seen on Law and Order, where the House impeaches, that's kind of like an indictment by a grand jury. It's an accusation. And then the trial is what it sounds like. Now, this isn't a legal trial, so that all the rules of evidence and all that kind of stuff necessarily applies. But members of the House come over to the Senate, they act as the prosecutor when the President is impeached, the Chief Justice of the Supreme Court presides and the trial is before the full Senate. And that's what happened with Bill Clinton. And the Senate in effect is the jury and kind of like the judge. It's a little bit flexible from what people are used to seeing, but it's basically the Senate decides whether the individual is guilty or not of offense that he's been impeached for.

CORDERO: Looking back, Tom, what was it like on Capitol Hill during Bill Clinton's impeachment?

JIPPING: Well, it certainly dominated everybody's attention. As I said, impeachment, we've only impeached 19 officials in the history of the country. 13 of them have been judges, so it's very rarely used. As I said, the last one was 2010, Clinton was the one before that. It was 10 or more years before that that we did another one.

CORDERO: So does anything get done or does the media, does it suck all the oxygen out of the room? And this is what we're looking at. I'm really asking for now because I'm wondering what the next couple months will hold.

JIPPING: Sure well of course it's been 20 years since the House impeached president Clinton and the media is radically changed since then. The news cycle, social media, all of that. We haven't impeached president with those kinds of capabilities and so on. So it's a little bit uncharted, I suppose as to, but then the American people and a lot of that media, they've got a very short attention span too. So I think a lot of it will be done out of public view. The media will cover it a bit, but when the trial itself happens, should the President be impeached and if there's a Senate trial, when that trials actually occurring, it's going to suck all the oxygen out of the room and everybody will be glued to that.

CORDERO: And so that will be on C-SPAN, and it will be something that the American public will be captivated by.

JIPPING: Absolutely. Right. The trial itself will be the deliberation of the Senate after the trial is done is closed, and then of course the result will be announced. It's important to point out that the only consequence of conviction is automatic removal from office and then the Senate would vote separately about whether that person could hold any other federal office in the future. Sometimes that's been done, other times it has not. And of course that wouldn't be done if the Senate does not convict, but beyond that, that's all the consequences that the Congress has through the impeachment process.

CORDERO: So let's say Trump was removed from office, would Vice President Mike Pence then become Commander in Chief?

JIPPING: That's correct. As in the case where any president leaves office for any reason during a term the Vice President would become President.

JIPPING: That's correct. Two Presidents have been impeached. Neither one was convicted.

CORDERO: So what would happen then? Is it likely that there would be a primary election for Republicans or do you think Vice President Mike Pence then now becoming president would be-

CORDERO: Tom, as we wrap up this explainer, I'm just curious for someone who has been around the ins and outs of the legislative process at every level, what do you think about impeachment?

JIPPING: And so impeachment, it short circuits that. It says that in between elections before you go to the polls, we’ve got to get rid of this official now, out of office, that's a pretty radical thing to do. So I think that the bar has to be set very high. The Constitution provides a standard for that and we ought to be very careful and very cautious to kind of sidestep the system of government that we have, which has served us so well for a very long time. Elections really are what we ought to rely on in terms of choosing our leaders.

CORDERO: Thank you so much for your time today, Tom.

The House Has Impeached President Trump. Where Do We Go From Here?

How “Court Packing” Would Damage Both the Judicial and Legislative Branches