Marriage: Still the Safest Place For Women and Children

Marriage: Still the Safest Place For Women and Children

The institution that most strongly protects mothers and children from domestic abuse and violent crime is marriage. Analysis of ten years worth of findings from the National Crime Victimization Survey (NCVS), which the U.S. Department of Justice (DOJ) has conducted since 1973, demonstrates that mothers who are or ever have been married are far less likely to suffer from violent crime than are mothers who never marry.

Specifically, data from the NCVS survey show that:

Other social science surveys demonstrate that marriage is the safest place for children as well. For example:

Without question, marriage is the safest place for a mother and her children to live, both at home and in the larger community. Nevertheless, current government policy is either indifferent to or actively hostile to the institution of marriage. The welfare system, for example, can penalize low-income parents who decide to marry. Such hostility toward marriage is poor public policy; government instead should foster healthy and enduring marriages, which would have many benefits for mothers and children, including reducing domestic violence. 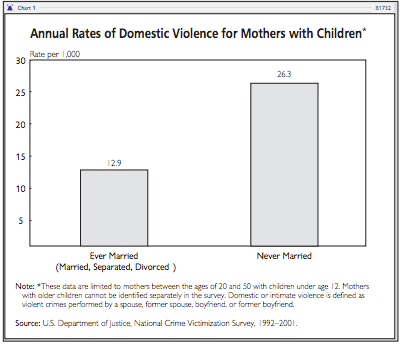 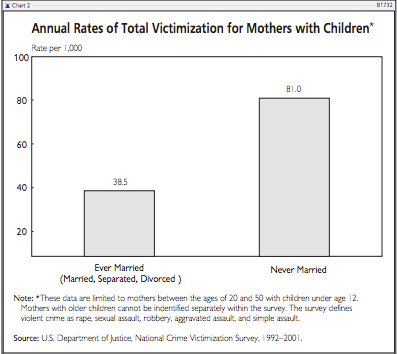 Rates of victimization of children vary significantly by family structure, and the evidence shows that the married intact family is by far the safest place for children.6 (See Chart 3.) Although the United States has yet to develop the capacity to measure child abuse by family structure, British data on child abuse are available. These data show that rates of serious abuse of children are lowest in the intact married family but six times higher in the step family, 14 times higher in the always-single-mother family, 20 times higher in cohabiting-biological parent families, and 33 times higher when the mother is cohabiting with a boyfriend who is not the father of her children. 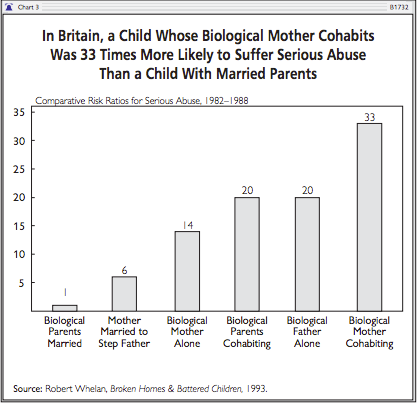 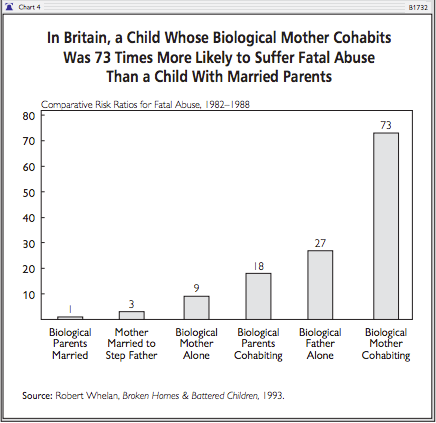 What Policymakers Should Do

In legislation and social policy, the government should not penalize parents for marrying. Given the rising evidence that non-married mothers and their children are at greater risk of violent crime and abuse, government policy should not encourage--either directly or in unintended ways--single motherhood and cohabitation.

Yet that is what is being done in many of America's means-tested welfare programs. Because mothers and children are safest from harm within a married family, policymakers should begin the work of implementing policies to reduce the bias against marriage in welfare programs and to strengthen marriage as the primary institution for raising children.

Members of Congress should support President Bush's proposal to spend $300 million per year on efforts to rebuild marriage among the poor. It is the first serious proposal in this regard ever to come before Congress. His suggestions, if adopted into law, would begin the necessary work to reconstruct the institution of marriage, which failed welfare policies of the past have undermined. Now that the first stage of welfare reform--rebuilding an ethic of work--is well underway, Congress should support the President as he focuses on the second important stage: rebuilding a culture of marriage in American society.

Members of Congress should begin to reduce and eventually eliminate the penalty against marriage in most means-tested welfare programs. For example, they could issue a joint resolution indicating their intent to achieve this goal. Then they could request that the Department of Health and Human Services submit a list of options that would be good candidates for this reform.

In establishing programs to help those who need assistance, the question before Congress should not simply be whether or not to fund a program, but how much its policies would improve the well-being of adults and children. Social science data clearly show that mothers and children are safest and thrive best in a married family. It is time for the government to adopt policies that reflect this knowledge and rebuild, rather than undermine, the institution of marriage.

1. This is revised and updated from Heritage Foundation Backgrounder No. 1535, "Marriage: The Safest Place for Women and Children," April 10, 2002.

4. For purposes of this paper, the term "mothers with children" refers to women between the ages of 20 and 50 with children under the age of 12 in their household. Limitations in the NCVS do not permit identification of mothers who have children ages 12 to 18 but no younger children. Most of the women in this survey were between the ages of 20 and 50.

6. See Fagan, "The Child Abuse Crisis: The Disintegration of Marriage, Family and the American Community."

A U.S. Embassy Should Fly Only One Flag