Recent data show that wages have been growing recently at rates comparable to their long-term trends. Measuring average wages accurately is more difficult than it sounds, so this paper looks at six metrics of wage and compensation to present a complete picture.

Since the beginning of 2013, wages have grown about 0.9 percent per year. Since 2006 (and thus including the recession), annual growth has been around 0.5 percent. Over longer horizons reaching back to 1960, wages and compensation have usually grown between 0.7 percent and 1.7 percent per year. Thus, recent wage trends are typical of the modern era, although modestly lower than average.

A widely repeated narrative is that wage growth in recent years has been terrible. Many economists and journalists have written about how slowly wages are growing—and have often written that they are not growing at all.[1] Yet six common indicators show modest but steady growth in the past two years and even in the past eight years. Why the discrepancy?

One reason that wages appear to be growing more slowly is that inflation has been low, especially since oil and gas prices have dropped. In the past two years, inflation has averaged just 1.16 percent per year. This is less than half the rate of inflation from 2000 through 2007, and it means that fewer people are receiving nominal raises.

However, what matters for well-being is the real (inflation-adjusted) value of wages.[2] Low inflation means that receiving a nominal raise of 2 percent in 2014 increases a worker’s real income more than a 3 percent raise would have in 2004.

The analysis in this paper uses the Personal Consumption Expenditures (PCE) deflator, which is the most accurate measurement of the general cost of living. The other common inflation measure, the Consumer Price Index (CPI), covers fewer consumer goods and is known to be biased upward.[3] Since 1960, the gap between the two measures has averaged 0.5 percent per year, although in the past few years it has narrowed to about 0.25 percent.[4] Thus, if someone reports current wage growth of 0.7 percent using the CPI, the same data would show 0.95 percent growth using the PCE. 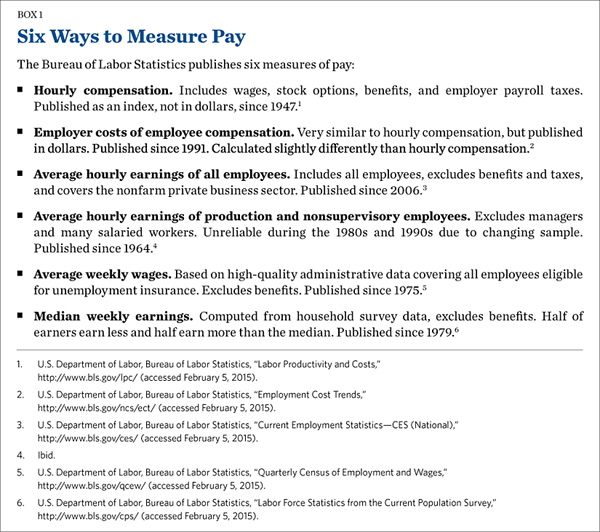 The consensus among six common measures of compensation (see Box 1) is that wages have been growing at around 0.9 percent per year since the beginning of 2013. At this rate, average wages will rise 31 percent in 30 years.

The data show no disagreement between hourly and weekly metrics. The metrics that better represent working-class wages performed slightly better than the metrics that cover all workers.

The two measures of hourly compensation were the outliers, reporting 0.65 percent and 1.5 percent annualized growth, respectively.

While 0.9 percent annual wage growth is nothing to celebrate, it is much better than zero growth, and it is not stagnant by historical standards. Like employment and gross domestic product (GDP), wages were slow to recover from the Great Recession and earn no praise for the policies enacted in response to the recession. 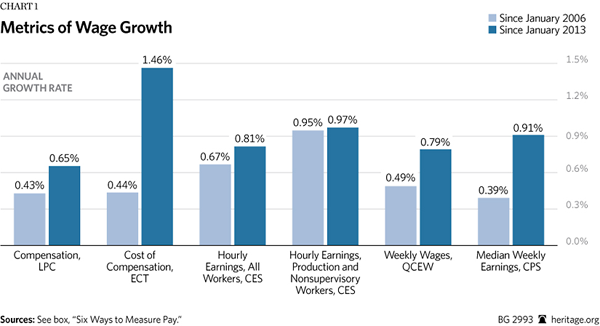 Although current wage growth is in line with historical averages, wages may be just recovering ground lost to the recession.

Wage growth since 2006—the first year in which all six data sources are available—has been lower than most historical averages, but still positive. Four of the measures are clustered around 0.45 percent annualized growth, while two measures of hourly earnings offer an optimistic dissent.

Going back further to include two recessions and the 2000s expansion, wage growth has been about 0.8 percent per year, in line with historical averages. This would yield a 27 percent increase in average wages over 30 years. In this period, compensation growth was highest, and the two measures of weekly wages were lowest.[5] Commerce Department data confirm that the non-wage share of compensation shrank in the late 1990s and then grew from 2000 to 2005.[6]

How strong has wage growth been historically? Less data are available for earlier decades, and the available data are less in agreement. Chart 2 shows growth periods for several measures of wages and compensation since 1960 or their earliest availability. 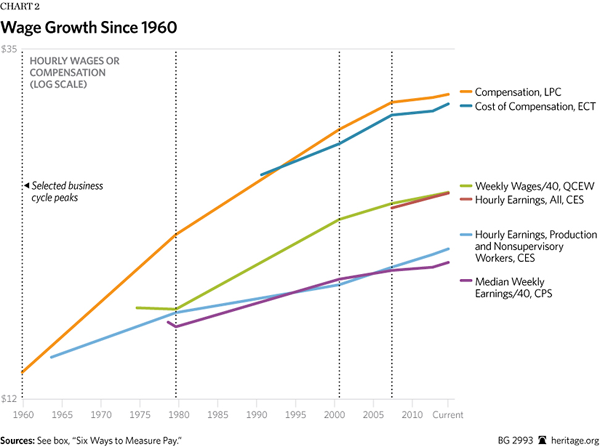 During the first part of this era, before 1980, the gap between compensation and wage growth was large: Hourly compensation grew 2.0 percent per year, and wages grew 0.7 percent per year. About one-third of the gap is explained by the rapid growth of non-wage benefits. In 1964, 10.3 percent of compensation was non-wage; in 1980, it was 15.5 percent. However, two-thirds of the gap cannot be easily explained.

Hiring and employment finally showed signs of a robust recovery in 2014, due in part to the termination of extended unemployment benefits.[10] Should we expect the recovery to strengthen in 2015? In particular, should we expect that it will spill over into wage growth?

The good news, as shown above, is that wage growth had already arrived in 2013 and 2014. Even indicators that exclude high-wage earners have grown at a healthy pace since January 2013. The bad news is that there are no compelling reasons to believe wage growth will accelerate much, although we may be pleasantly surprised. One reason that wages are unlikely to accelerate is that they did not drop much during the Great Recession.[11] Another is that average wage growth can be ordinary even when the typical individual’s wage growth is strong, because attractive labor markets bring more low earners into the workforce.[12]

Yet there is also no reason to believe that wage growth will slow in 2015 and beyond. Rising labor productivity, not cyclical factors, drive long-run trends in wage growth. Although the Great Recession has overshadowed the past six years, one will better predict the years ahead by taking a long view of the past than by extrapolating from the recovery.

Why Do Wages Seem Stagnant?

Given that straightforward data unanimously show steady, historically typical wage growth over the past few years, it is surprising that a cottage industry has grown up around making wages appear to be stagnant. Other analysts arrived at their claims that wages are stagnant by:

High wage growth is universally applauded, but many proposals for raising wages are poorly reasoned. One common policy argument is to choose a period of historically high wage growth, such as the 1960s or the 1990s, and then cherry-pick one or two policies that were in place at the time. Misplaced nostalgia for the 1960s might make pundits pine for strong unions or a large manufacturing sector, but those same pundits would blanch at bringing back most other aspects of the 1960s economy: race and gender segregation in most workplaces, a military draft, low social spending, and high marginal tax rates.

Finally, trying to raise wages through macroeconomic management is a recipe for rapid failure. The aggressive monetary policy of the late 1960s led to temporary wage growth, but soured into “stagflation,” a period of high inflation and low growth that persisted for a decade and contributed to the low wage growth of the 1980s. Stimulus spending and tax code gimmickry are like pushing on a string: The gains to one sector or region are losses to others. High minimum wages have harsh trade-offs for those at the margins of the labor force and cannot in any case improve the trend.

Can government do anything at all to help wages? Perhaps unintuitively, the most promising area for wage-raising policy is in lowering the prices of big-ticket consumer goods. The largest expenses for most American families are housing, transportation, food, and health care. Education is similarly expensive, although most of the cost is funneled through taxes.

In each of these categories, existing policies have artificially raised prices that consumers pay, so reforming those policies can improve Americans’ real incomes.

Regulatory reforms in these areas would either allow suppliers to create the same output using fewer inputs (e.g., less time spent on building permits) or allow new suppliers to compete with existing ones. In each case, consumers have more choices at lower prices, allowing them to stretch their wages further.

Wage growth over the past two years has been typical of historical averages. By examining several measures of aggregate wage growth, one gains a more complete picture of historical and recent trends. Although the historical data are well-known and recent data are widely available, many pundits have written about “stagnant wages.” That description of the recent trends has the risk of giving the false impression that the recovery, although delayed and incomplete elsewhere, is absent in wages. A better conclusion is that wage growth is mediocre but real; the same can be said of GDP and employment growth.

Policymakers need not be satisfied with wage growth of less than 1 percent per year. Regulatory reforms that lower the cost of living, especially in the major consumer spending categories, can help to stretch each hour’s wage further, effectively raising real wages.

—Salim Furth, PhD, is Senior Policy Analyst in Macroeconomics in the Center for Data Analysis, of the Institute for Economic Freedom and Opportunity, at The Heritage Foundation.

[2] Throughout the paper, concepts are inflation-adjusted and seasonally adjusted unless otherwise specified. Where I refer to nominal-dollar or current-dollar amounts, I do so explicitly.

[4] Calculations use the CPI-U. Other CPI series will give slightly different results.

[5] However, this discrepancy is not explained by the change in hours worked, which was slight.

[8] Average Hourly Earnings of Production and Nonsupervisory Employees from 1964 to 1975 and then Average Weekly Wages from the Quarterly Census of Employment and Wages from 1975 to 2007. The former series is unreliable during the 1980s and 1990s because its sample grew steadily to include more low-wage workers.

[9] This paper does not engage the extensive debate about average wage growth within demographic groups, some of which have performed better than others.

[12] The reverse can occur during recessions: Low-productivity workers are laid off, and the average wage rises despite falling employment. In 12 months during the Great Recession, real wages rose 3.4 percent thanks to low-wage layoffs and falling prices, but that is not an economy to emulate.

[13] Hersh, “Why Wages Are Not Rising as Job Growth Increases.”

December Jobs Report’s Real Numbers Are Anemic Not Robust. Here’s Why Americans Should Be Wary