Economic freedom is key to addressing Mexico’s economic, security, and civil society concerns. Since President Enrique Peña Nieto began his single six-year term in December 2012, progress has been made in challenging the private and public monopolies and duopolies (and their labor unions) that have historically dominated and hampered huge portions of Mexico’s economy. More remains to be done, especially with regard to Mexico’s hydrocarbons industry.

Mexico’s protectionist and “state corporatist” combines benefit politically powerful rent-seekers in sectors such as energy, telecommunications, construction, food production, broadcasting, financial services, and transportation. They have long been a drag on competitiveness and job creation. 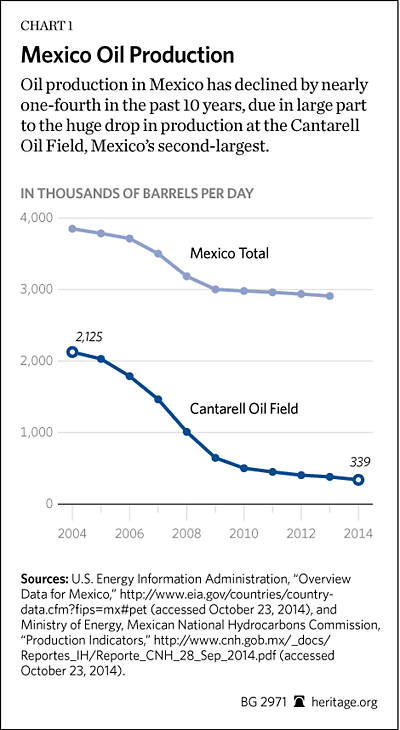 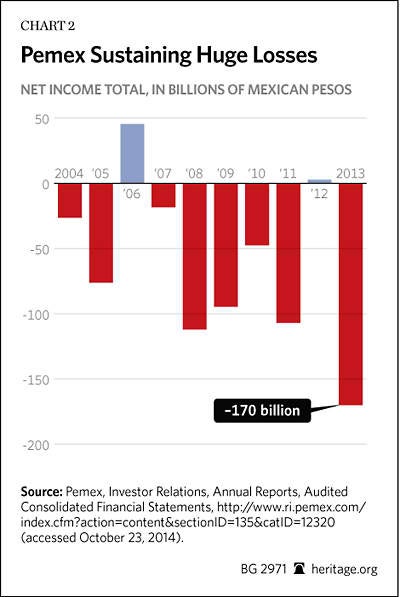 Despite being the third-largest oil producer in the hemisphere and the 10th-largest in the world, Mexico’s hydrocarbons industry has been in decline. The historic energy reforms implemented in August 2014 can open doors for foreign investment in Mexico’s oil and natural gas sectors, but the new hydrocarbons law is overly complicated and needs further revisions if it is to succeed. These modifications include the further streamlining of regulatory oversight and an even more diminished role for the state-owned oil company Pemex. Underperforming, inefficient, and corrupt state-owned enterprises (SOEs) are a major factor restraining development.

The U.S. government can assist Mexico by facilitating trade, regulatory reform, and infrastructure development—all of which will greatly benefit both countries—and by encouraging additional market-oriented reforms.

Mexico nationalized its oil sector in 1938, and Petróleos Mexicanos (more commonly known as Pemex) was created as the sole oil operator in the country. Pemex became one of the largest non-publicly traded companies in the world, and the high taxes imposed on it provide close to one-third of total Mexican government revenue. The 1994 North American Free Trade Agreement (NAFTA) removed significant investment barriers and provided security for U.S., Mexican, and Canadian investors, but it specifically excluded the Mexican energy sector and reserved to the Mexican government the right to prohibit foreign investment in the sector.

Pemex has been poorly managed for many years and has operated at a loss since 1998. Its debt burden has increased significantly, while its production has steadily declined—down 25 percent from 3.6 million of barrels per day (bpd) in 2004 to 2.5 million bpd in 2013. The company’s powerful labor union has imposed unsustainable pension liabilities on the company.

Notwithstanding significant quantities of untapped oil and gas reserves (especially deep offshore and in shale formations), Mexican crude oil production in 2013 reached its lowest point since 1995 and continues to decline in 2014. Today, less new oil is being found than is being produced by a factor of nearly one-third. Until Mexico began importing natural gas from the United States in large quantities,[1] electricity prices in Mexico were very high. Indeed, even today industrial electricity costs remain nearly 80 percent higher than in the U.S.[2] 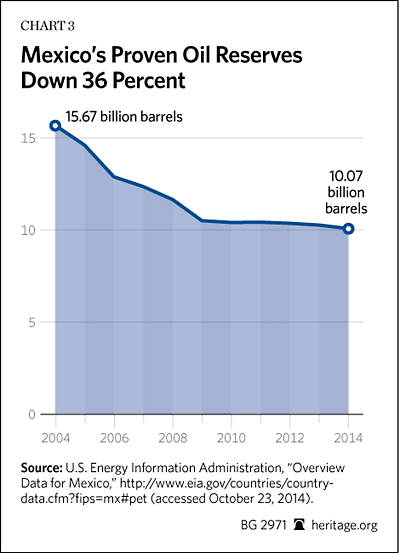 It is urgent, therefore, that new sources of oil and gas be found and put into production, not only to sustain domestic consumption and export of petroleum products, but also to modernize those sectors and to create less expensive sources of clean fuel to generate electricity. Recent reforms of the country’s energy sector, particularly the hydrocarbons industries, are aimed at doing just that.[3]

Oil and Gas Infrastructure in Mexico

Pemex operates a pipeline network within Mexico of only approximately 3,000 miles that must connect major production centers with domestic refineries and export terminals. This network is clearly inadequate to service all areas of the country and transport the oil and gas from its source to the refineries and the market.

Until recently, Mexico had no international oil pipeline connections; most of its exports were shipped by tanker from three export terminals on the Gulf Coast. With the introduction of energy sector reforms and in conjunction with the opening of Mexico to imports of natural gas flows from the U.S. to Mexico, Pemex has launched an ambitious public-private-sector pipeline construction program on both sides of the border that could cost as much as $8 billion. 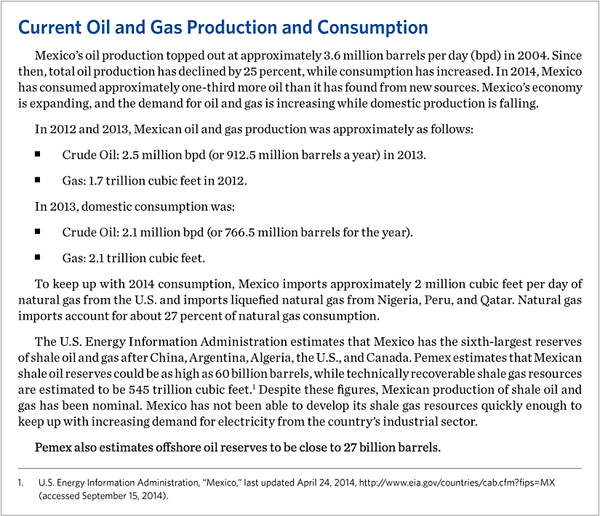 Other pipeline construction projects underway include:

Mexico has six refineries, all operated by Pemex, that at the end of 2013 had a total refining capacity of approximately 1.54 million bpd. Pemex also controls 50 percent of the Deer Park Refinery in Texas that produces 334,000 bpd. In 2013, Pemex announced plans to build a $2.5 billion expansion of its Tula Refinery. It is also building a new $10 billion refinery to expand Mexico’s refining capacity.

The Hydrocarbon Law and Hydrocarbons Revenue Laws passed by Mexico’s Congress in December 2013 and the additional legislation signed into law on August 11, 2014, open the sector to private and foreign investment for the first time since 1938.

The law provides for new contract models for the exploration and production of oil and gas:

Other key elements included in the legislation:

Except for the entitlements granted to Pemex, exploration and production (E&P) contracts will only be granted through a competitive bidding process organized and regulated by SENER, the Ministry of Finance, and the CNH. In this process, SENER will select areas for public bidding and establish the technical and financial qualifications for bidders; the CNH will conduct the bidding process, evaluate bids, and award contracts; and the Ministry of Finance will establish the economic and fiscal terms of the E&P contracts. For E&P activities, the Hydrocarbons Law establishes two different regimes to be regulated by the CNH: entitlements granted to state productive enterprises (such as Pemex) and E&P contracts entered into with private parties or state enterprises. For midstream and downstream activities, the law establishes a permit regime to be generally regulated by SENER and the Energy Regulatory Commission. The executive branch is expected to issue regulations no later than February 2015.

Benefits of the New Law for the Mexican Economy

Reform of the Mexican energy sector is likely to lead to a renaissance of Mexican oil and gas production. With ample reserves, foreign investment in Mexico’s oil and gas sector, particularly by experienced and nearby U.S. companies, will greatly benefit Mexico, especially in the development of the country’s shale oil and gas. The Mexican government predicts that the opening of the energy sector will result in approximately $50 billion in new investments between 2014 and 2018.[5] 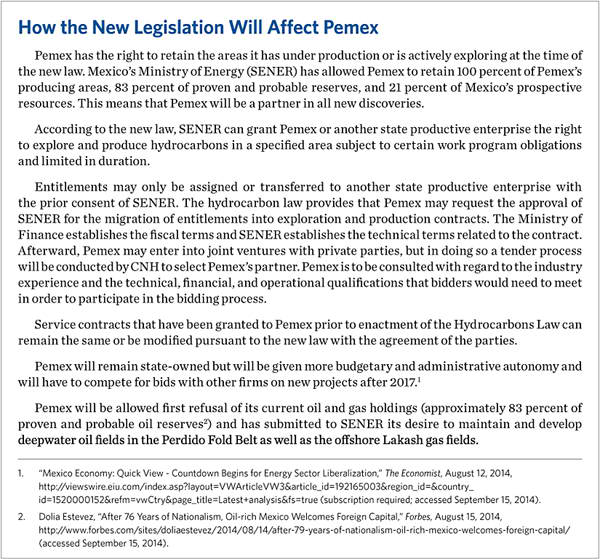 Pemex estimates that it could earn between $25 billion and $60 billion as a result of joint ventures it will now be permitted to undertake with international oil and gas companies, while the Manhattan Institute for Policy Research says 2.5 million jobs and more than $1 trillion in revenue could be created by 2025.[6] These figures may be inflated, but there is no question that energy reform will boost oil and gas production in Mexico.[7] With successful energy-sector reforms in Mexico, the U.S. Energy Information Administration (EIA) estimates that oil production could rise to 3.7 million bpd by 2040. A year ago, the EIA estimated that Mexican oil production would likely reach 2.0 million to 2.1 million bpd by 2040.

Mexican energy reform will open opportunities for U.S. energy and service infrastructure companies that are seeking new markets. Increased production in Mexico will lead to lower energy costs for Mexican consumers and manufacturers and perhaps make Mexico energy independent. The U.S. will benefit from the creation of a stable and secure new energy source on our southern border. In addition, a stronger Mexican economy and more opportunity for Mexican workers will likely further decrease the flow of illegal immigrants from Mexico to the U.S.

Mexico’s commitment to energy reform has already had positive effects on the country’s economy. The value of the Mexican peso has increased and, with the prospect of increased oil and gas production leading to lower energy costs, Mexico’s increased competitiveness will greatly benefit the manufacturing sector.

U.S. companies will further benefit by increasing their business in a neighboring country and may develop new techniques from drilling and producing oil and gas from shale formations that may be different from those in the U.S.

If the shale oil and gas resources in Mexico prove to be extensive, there will need to be an expanded oil and gas pipeline system in Mexico. The Mexican government recognizes this and has already begun investing in its oil and gas infrastructure.

What Should the Mexican Government Do?

With the discovery of oil and gas in shale formations and the development of technology to recover oil and gas from these formations, the U.S. today has a surplus of gas and is approaching oil independence. Mexico has yet to develop its shale oil and gas industry but, if Mexican reserves are as extensive as estimated, increased production of shale energy can contribute greatly to Mexico’s goal of energy independence.

The Mexican government should:

What Should the U.S. Government Do?

The U.S. can assist Mexico and increase gas trade between the two countries by:

—James M. Roberts is Research Fellow for Economic Freedom and Growth in the Center for Trade and Economics, of the Institute for Economic Freedom and Opportunity, at The Heritage Foundation. William Tucker is Chairman of Tucker & Associates, a Washington, D.C.–area international trade and consulting firm. Preston Turner, a member of the Young Leaders Program at The Heritage Foundation, made valuable contributions to this paper.

[3] The Mexican Congress and the Peña Nieto administration formally opened the Mexican oil and gas sector to private domestic and foreign companies in August 2014 to attract investment and to change the role of Pemex.

William Tucker
More on This Issue

South Korea’s Strong Alliance With U.S. Is Built On a Solid Economic Foundation

On 10th Anniversary of the Arab Spring, Tunisia Is Leading the Way on Democracy