Is This the End of a Free Hong Kong? 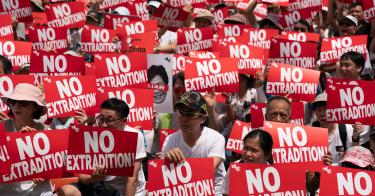 Is This the End of a Free Hong Kong?

Why everyone is so afraid of Hong Kong's new extradition bill and how Hong Kong got itself into this position.
Copied

This week, about two million people flooded the streets of Hong Kong to protest a bill that would allow for the arrest and transfer of Hong Kong residents and foreign visitors to Mainland China with very little safeguards.

To give you a better idea of how huge this protest was, that's about one in every four citizens of Hong Kong marching in the hot, subtropical weather.

The time lapse video footage is incredible. It's just a sea of people that never ends. Young people and old people holding signs and walking in protest.

Cordero: Unfortunately, there was some violence, in what was a mostly peaceful protest. Police were accused of using excessive force, and a man even fell to his death while trying to hang a sign.

Cordero: So what's so important about this bill that would bring so many people out to protest? Well, the fear is that citizens of Hong Kong or foreigners, including Americans and Taiwanese could be extradited to China merely for political reasons, something that China is notorious for. That's a big, scary problem for business people, journalists, and political dissidents. It could also be a huge problem for Hong Kong and Mainland China's economy.

Did you know that Hong Kong is actually the freest economy in the world? This position is partly based on its strong rule of law. Hong Kong has ranked number one among 180 countries for 25 years in Heritage's annual Index of Economic Freedom, but their score has been rapidly dwindling.

Today, Ambassador Terry Miller explains how Hong Kong got itself into this position, why this bill is so dangerous, and if this is the beginning of the end of a free Hong Kong.

Ambassador Miller is the director of Heritage's Center for International Trade and Economics and our Mark A. Kolokotrones Fellow in Economic Freedom.

Cordero: So, Ambassador, how did we get here? Where did this whole story and this extradition bill begin?

Terry Miller: Well, this started with a very technical issue: A desire on the part of the government to be able to extradite a criminal to Taiwan of all places. But there was no real justification given by the government for why they needed to change the law now, suddenly after 20 years of this transition period that Hong Kong is in with the Mainland Chinese government. Suddenly we had a new extradition that would not only allow the extradition of an individual to Taiwan, but also to Mainland China. That put at risk an awful lot of other people, democracy advocates in China, businessmen who might want to travel to Hong Kong, so it was a ham-handed move by the government.

Cordero: Can you explain a little more about why everyone is so afraid of this bill?

Miller: It provided very few legal safeguards. There wasn't a long process, an elaborate process of judicial review of extradition requests. It would allow the administration in Hong Kong to just move forward and transfer people. You have to understand the context of this. Hong Kong's in the midst of a 50-year transition period where they're allowed to maintain separate legal and economic systems from Mainland China. People on Hong Kong have seen a gradual erosion of their freedom over the last 20 years, and they're quite worried that things are going to get worse going forward.

Cordero: Yeah, that leads well to my next question then is that why would Hong Kong do this to itself? It's Hong Kong's leader, Carrie Lam, who's pushing this extradition bill, but shouldn't she be looking out for the best interest of Hong Kongers?

Miller: Well yes, in theory one would hope that was the case, but you have to remember that Carrie Lam is in many respects a creature of Beijing rather than a creature of Hong Kong. Certainly she's a citizen of Hong Kong, she grew up in Hong Kong, and she has many loyalties to Hong Kong, but she was put in office, in effect, by-

Cordero: So, this would affect markets and banks may not want to do business there because it's just too thin of a line.

Miller: I think that's right. It's even a little bit worse than that. I think investors and foreign business people could not have the confidence that they would be able to operate freely in Hong Kong if this law were passed. Certainly looking ahead over time, people are afraid that there's going to be a gradual erosion of their political and economic freedom. There are some alternatives if Hong Kong becomes just another Chinese city, then businesses and others can move their operations to a place like Singapore, which does enjoy complete freedom from Beijing.

Cordero: I've heard you explain in interviews that this is bad for China as well. How so?

Miller: Well, our hope has always been that China would continue to evolve, and in fact, evolve rapidly over time. That was the theory behind China joining the World Trade Organization, for example. That evolution in China is happening, but it's not happening as rapidly as we would have hoped, and so one of the things that President Trump right now is doing with this trade war with China is trying to accelerate the pace of reforms in China. We're asking China to reconsider things like its state support for business, its state ownership of businesses, its restrictions on investment capital, its control of the financial system. All those things would increase China's prosperity, increase its rate of growth, and help accelerate its transition into a truly modern economy. Yes, anything that we and Hong Kong can do to accelerate change in China I think is a positive.

Cordero: Carrie Lam, the top official in Hong Kong, actually said that she plans to suspend this bill, but the protests are continuing. Can you explain why people are still so upset?

Miller: Well, people were hoping for the word 'withdraw' rather than the word 'suspend.' And I think people were hoping for something of a bigger victory than they got. What they got was really more in the nature of a stay of execution, I think, than a true victory for democracy. You can't really have a democracy operating with mobs in the street, even as well intentioned or as peaceful as these were. You need institutions that reflect that. People have seen their institutions decay in Hong Kong over the past 20 years. What they want is some guarantee or assurance that that decay will not continue in the future.

Cordero: So now there's this deep distrust for Carrie Lam.

Miller: Yes, I think so. She's lost all credibility. People just are not willing to respond to her apology. She actually cried in one of her interviews. I think she probably is genuinely surprised and distressed at the reaction that there has been to this law, but she needs to do a better job in the future of understanding, reading the mood of the people, and making sure that she's standing up for them.

Cordero: So, this pressure that's coming from Beijing, you've said this has been mounting. Do you think this is just the beginning of a fall for Hong Kong? Do you think that they'll let up? Do you think the protests can push Beijing at bay? What do you think's going to happen?

Miller: I think in the long run, Hong Kong is going to become a Chinese city, and we'll see what kind of China there is at that time. We're talking about 30 years in the future. A lot could happen in 30 years, both in Hong Kong and China. But it's clear that the integration of Hong Kong into China is going to continue and the people in Hong Kong are fighting to preserve the freedoms that they have and it'll be very interesting to see how successful they are in that struggle.

Cordero: Thank you so much Ambassador.

Cordero: That's it for this episode of Heritage Explains. You can find Ambassador Miller's recent op-ed on this issue in our show notes, as well as a link to Heritage's Index of Economic Freedom. I also included a link to some of the video footage of the protest. It's really something you should see.

U.S. Will Regret This Shameful Appeasement of Russia