The U.S. economy is roaring like no other time in recent memory. The job market is hot, unemployment is down to record lows, and small business optimism is soaring.

Wages are rising for the first time in two decades, with an overall unemployment rate of 3.8 percent, matching the lowest rate in 50 years.

Delivering on policies that will promote economic freedom in these areas is key to making sure this rebound in dynamism doesn’t come to an abrupt halt.

The U.S. economy is roaring like no other time in recent memory. The job market is hot, unemployment is down to record lows, and small business optimism is soaring.

But this newfound dynamism didn’t come from nowhere. It required a package of market and consumer-friendly reforms passed by Congress and adopted by the Trump administration. These reforms have boosted economic freedom.

According to The Heritage Foundation’s 2019 Index of Economic Freedom, America’s economic freedom has seen a dramatic boost—from 18th place in the world to 12th place in the span of just one year. America’s score ticked up by more than a full point from last year, reaching the highest level in eight years. 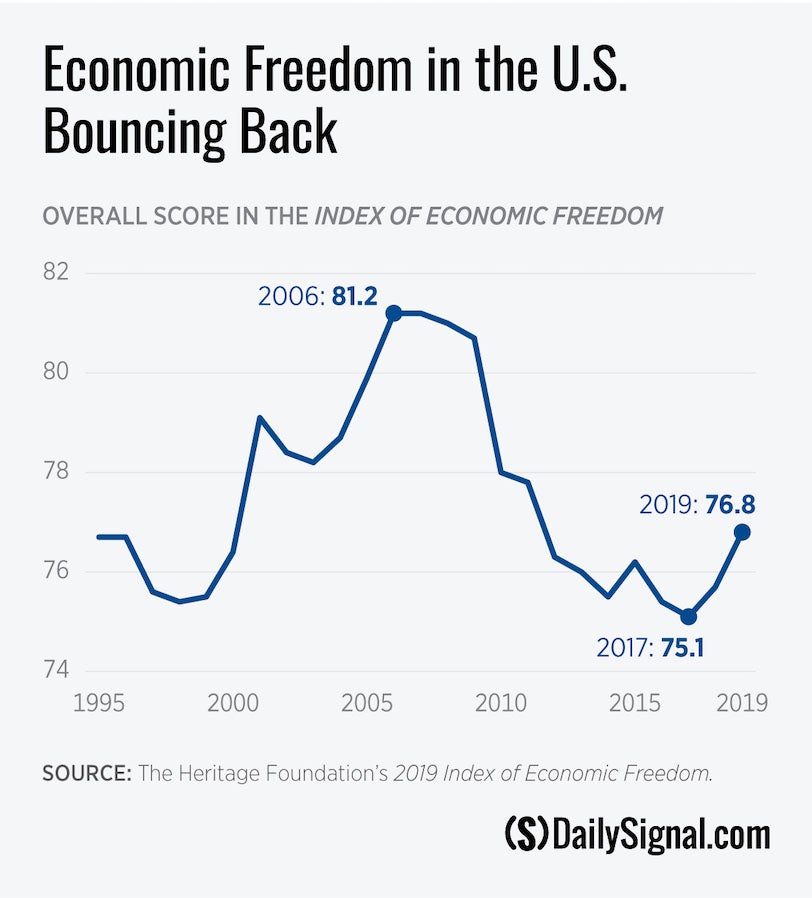 The annual index—now celebrating its 25th year—provides an overall snapshot of almost every country’s level of economic freedom. It takes into account a variety of factors, like taxation, regulation, and trade. It is relevant to our job prospects and the prices we pay for goods and services, not to mention what kind of appliances and cars we can choose and buy.

Higher economic freedom scores tend to correlate with faster growth and broader economic expansion, as well as higher incomes and overall wealth. In fact, per capita incomes in the freest countries as measured by the index are six to seven times higher than incomes in the least free countries.

With that in mind, the United States’ notable rebound is very good news.

The vibrant growth we’re feeling has been unleashed by several key policy changes over the past two years, the most important being the 2017 tax cuts and deregulation. Real gross domestic product grew by upward of 3 percent over the last four quarters—unlike anything seen in the last 13 years. No wonder small business optimism has risen.

More remarkably, almost half of the states in the union now enjoy their lowest unemployment rates ever recorded by the Labor Department. Wages are rising for the first time in two decades, with an overall unemployment rate of 3.8 percent, matching the lowest rate in 50 years.

As the index has demonstrated since its first edition in 1995, the overarching objective of economic policies should be to create an environment that empowers people with more choices, thereby encouraging greater dynamism, business creation, and economic expansion.

Fortunately, some policymakers, both in the U.S. and abroad, have been paying attention to the data presented in the index. More than half of the countries ranked in this year’s index registered gains in economic freedom.

Others have stuck with discredited models of state planning and centralized control, and have reaped the consequences. Regrettably, the world remains divided between those who have economic freedom and those who do not.

This year’s index results give cause for cautious optimism, but show that the task of restoring America’s economic freedom is far from complete. As the U.S. economy is becoming more vibrant, the coming months and years present unique opportunities to implement more freedom-oriented economic policies.

America should build upon its new momentum. Why would we heap on more government spending, protectionism, and taxes?

Cutting the corporate tax rate to a competitive level was a critical step to freeing up capital for investment. Reducing government spending remains equally vital to enhancing economic freedom and improving the country’s overall economic performance.

It is also vital to keep the economy open to flows of international trade and investment. Protectionist policies are sure to hamper growth and reduce prosperity within the U.S., for individuals and businesses alike.

Delivering on policies that will promote economic freedom in these areas is key to making sure this rebound in dynamism doesn’t come to an abrupt halt.

2019 is the year of renewed opportunity for America. We must not let it go to waste.