Many on the left have for years cheered Venezuela’s Nicolas Maduro and his predecessor, Hugo Chavez, as heroes of “21st-century socialism.”

Ironically, however, the undeniable downward spiral of Venezuela’s economic freedom and the far-reaching suffering of its people have put the true meaning to those “hero” claims: Socialism and corruption have destroyed Venezuela.

“As I have heard many times from Venezuelans over the past [two] years, Mr. Maduro has exacerbated the country’s corruption and socialist policies, accelerating its descent from one of the richest countries in the Western Hemisphere to one of the poorest and most despotic,” Pence wrote. “He promised prosperity, but his actions have caused Venezuela’s economy to shrink by nearly 50 [percent].”

The vice president added, “For the sake of our vital interests, and for the sake of the Venezuelan people, the U.S. will not stand by as Venezuela crumbles.”

Indeed, Venezuela’s decline over the past 25 years, exacerbated by the combined ills of socialism and authoritarianism, is well-documented in Heritage’s Index of Economic Freedom, a data-driven benchmark study that tracks the performance of 186 economies on four pillars of economic freedom. 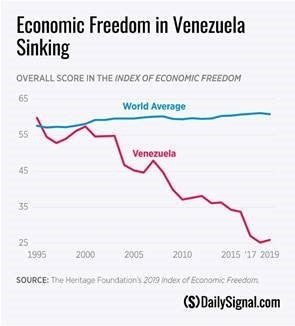 That rating did not last. Under Chavez and Maduro, economic freedom has evaporated, and Venezuela is now one of the most economically repressed countries in the world, with its score nose-diving to about 25.

That nearly 35-point plunge is among the most severe erosion ever recorded by a country in the history of the index.

Venezuela’s dismal economic-freedom score is reflected in statistics that translate into a real-time economic downfall.

The economy has contracted dramatically, worsened by mounting public deficits, mismanagement of the state-dominated oil industry, and a regime that has eschewed development of virtually all other potential forms of wealth generation.

What the editorial board of the Financial Times described as Maduro’s “thuggish, kleptocratic regime” has been technically unable and politically unwilling to undertake the deep and wide-ranging policy and institutional changes needed.

The outcome of socialism, double-downed by the authoritarian government has been beyond horrific, with the damage in Venezuela unbearably extensive.

The Venezuelan people have been suffering enough from hyperinflation, crippling food shortages and rampant hunger, scarce medical supplies, and a soaring infant-mortality rate.

Venezuela’s ongoing uprising is unmistakably a desperate action of rejecting socialism and the authoritarianism that has accompanied it.

Undoing 20 years of damage is a daunting task, but it must begin today. Free nations owe support to Venezuelans who are risking their lives for freedom and democracy.

More than 50 countries, including the U.S., have risen to the challenge and are now recognizing the head of the National Assembly, Juan Guaido, as Venezuela’s interim president.

That means he has the full authority to negotiate the country’s financial transactions, access foreign reserves, and appoint diplomats.

Following the United States’ decision to sanction Venezuela’s state oil company, all income from the oil industry is set to be controlled by the interim president.

Rather than continuing to serve as a means of enrichment for Maduro and his cronies, the oil funds will be used in Venezuela’s reconstruction.

It’s long past time for Maduro to step aside, as he is no longer the rightful president and is a usurper of power.

Now is the time to continue mounting pressure against him by targeting Venezuela’s illicit financial networks, going after corrupt regime officials, and empowering the interim government.

As China Sabotages Its Own Economic Interests in Europe, U.S. Should Take Advantage of the Opportunity