Americans have been relieved by the drop in gas and oil prices in recent years, but other oil-producing countries aren’t so thrilled.

Almost 60 years after its inception, OPEC is in many respects reaping what it sowed.

For their own sakes, more than ever, these countries should follow the path to greater economic dynamism that they have for too long ignored.

Americans have been relieved by the drop in gas and oil prices in recent years, but other oil-producing countries aren’t so thrilled.

Last week, the Organization of the Petroleum Exporting Countries agreed to continue to pinch oil production as it desperately tries to prevent a further drop in oil prices.

Strong U.S. production has caused a global oil glut in recent years, leading some to become increasingly uncertain about the future of OPEC.

The Organization of the Petroleum Exporting Countries claims to “secure fair and stable prices for petroleum producers” as well as “a fair return on capital to those investing in the industry.”

Cronyism and corruption make the problem much worse. Politics tends to drive production decisions at least as much as economic considerations.

Today, the organization includes 14 countries—two from South America, six from the Middle East, and seven from Africa. It controls more than 80% of the world’s crude oil reserves and large deposits of natural gas resources that make some of these countries, or at least their governing elites, exceedingly wealthy.

Yet, almost without exception (the United Arab Emirates and Qatar come to mind), they are plagued with poor property protections, consistent corruption, and a lack of economic liberty that suppress opportunities for innovation, diversification, and entrepreneurship.

In fact, the group might well be called the Organization of Poor Economic Conditions.

According to The Heritage Foundation’s 2019 Index of Economic Freedom, only four of 15 OPEC countries rank among the top 100 economically free countries in the world.

Nine were judged mostly unfree or repressed, and two were in such disarray that the index was unable to accurately rank them at all.

Even when evaluated among their regional peers, most of these countries lag badly. 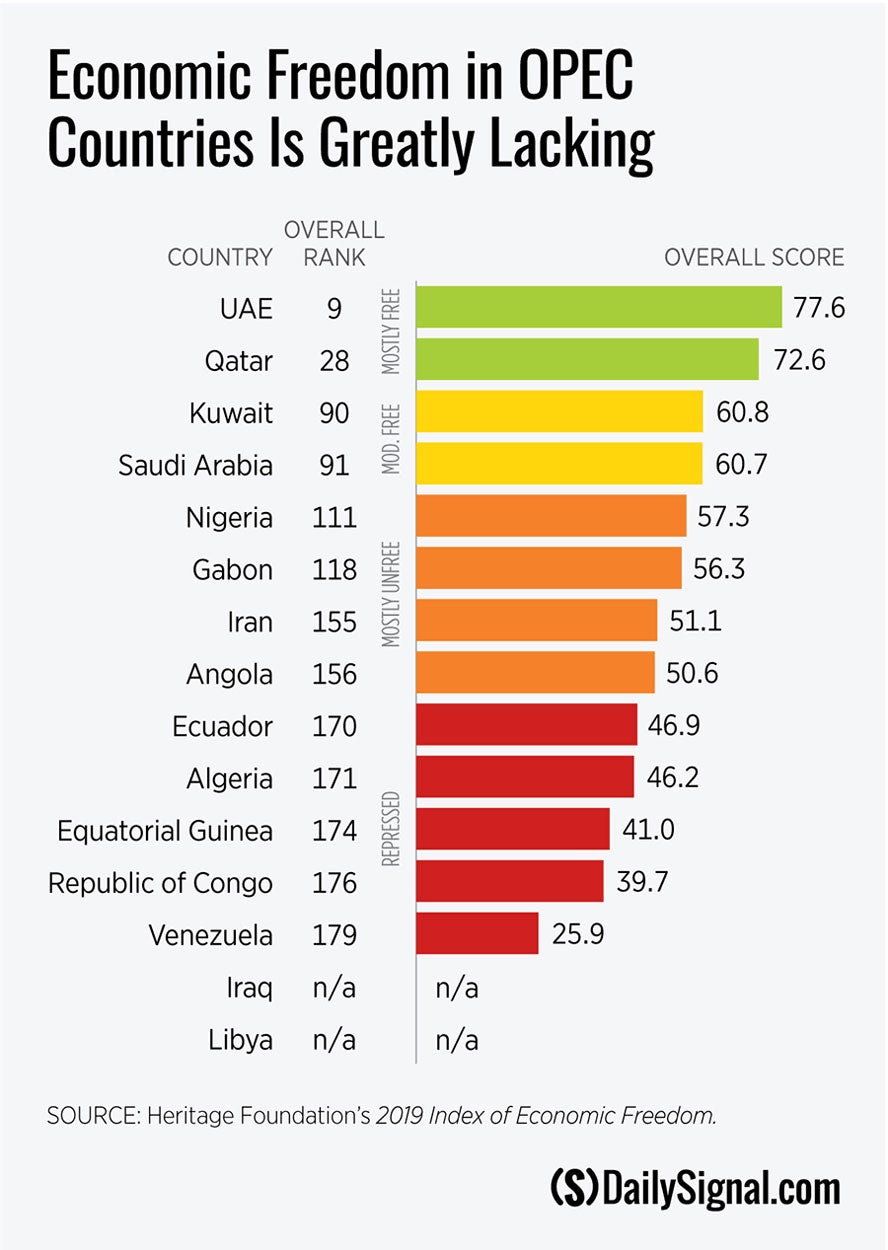 Almost 60 years after its inception, OPEC is in many respects reaping what it sowed.

The opaque cartel has struggled to keep up with the private-sector innovations that it unintentionally incentivized by keeping oil prices high, and it has failed even to provide a fair and stable petroleum market over much of its history.

If member countries want to stabilize their domestic economies and serve their people, they should adopt policies that diversify and liberate their economies. Oil-rich governments hurt themselves when they try to dominate economic activity in this way.

Oil revenue can provide the capital they so desperately need, but ownership structure and effective management of that capital requires private-sector participation. That’s not an easy process, but modern capital markets are certainly up to the task.

Command-and-control economies seldom enjoy long-term success. Economically free societies, on the other hand—where individuals and enterprises are empowered to decide for themselves the best ways to create wealth—have a far better record of lasting success.

For their own sakes, more than ever, these countries should follow the path to greater economic dynamism that they have for too long ignored.

The Next German Government Should Maintain NATO Commitments