Implementing free-market policies that advance economic freedom is the key to empowering women.

Strengthening and expanding economic freedom guarantees an individual’s natural right to achieve her or his goals and then own the value of what they create.

Implementing free-market policies that advance economic freedom is the key to empowering women.

The W-GDP Index quantifies prior legal reforms in the five crucial areas that affect women’s “full and free” economic participation in developing countries and can be used to track progress of the Trump administration’s Women’s Global Development and Prosperity Initiative in removing barriers to equal economic opportunity for women.

Advancing women’s economic activity by dismantling regulatory barriers hindering them and providing them with the same legal protections as men can result in large increases in economic output and promote overall economic development.

According to the Council of Economic Advisers’ report, “fully removing the legal barriers to women’s economic activity could increase annual global gross domestic product by $7.7 trillion, or 8.3 percent.” Ensuring women’s full and free participation in the economy, the report says, is “smart economic policy.”

The administration’s Women’s Global Development and Prosperity Initiative, which was spearheaded by first daughter and presidential adviser Ivanka Trump and launched in February 2019, involves the National Security Council, the State Department, and eight other relevant agencies.

Equally notable is that Congress has been paying keen attention to the initiative, too. Two lawmakers—Sens. Lindsey Graham, R.-S.C., and Jeanne Shaheen, D-N.H.—are leading a bipartisan legislative effort to have the initiative written into law.

This, Ivanka Trump said, “would permanently authorize W-GDP and establish women’s economic empowerment as a core facet of the United States foreign policy, in line with the president’s own national security strategy.”

The initiative aims to advance women’s empowerment and reach 50 million women in developing countries by 2025 by helping them start small businesses, attend vocational schools, and access loans, particularly through amending “laws in dozens of countries that restrict the ability of women to own property or work in the same jobs as men do,” The Washington Post reported.

As specified in the presidential memorandum on promoting women’s global development and prosperity:

Indeed, the administration has hit on one pragmatic tool; namely, empowering key segments of the society to lead transformation through free-market initiatives and structural reforms that respect human liberties. Advancing economic freedom is essentially about ensuring human empowerment.

Strengthening and expanding economic freedom guarantees an individual’s natural right to achieve her or his goals and then own the value of what they create.

Amartya Sen, a Nobel laureate economist who has made considerable contributions to development economics, once noted: “Development consists of the removal of various types of unfreedoms that leave people with little choice and little opportunity for exercising their reasoned legacy.”

Not surprisingly, as shown in the following chart, improving economic freedom and empowering women (measured by the Women’s Global Development and Prosperity Index) go hand in hand. 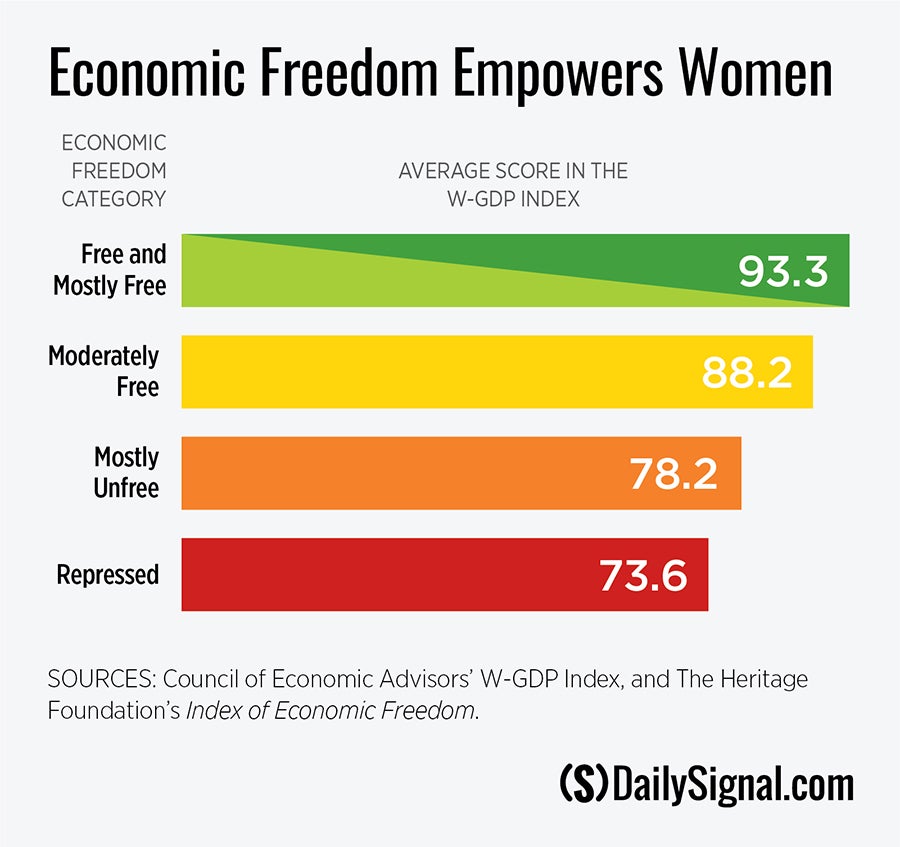 Reaching a greater global audience since its inception, the Women’s Global Development and Prosperity Initiative has become a unique tool for using U.S. aid more effectively to encourage entrepreneurship, push private enterprise, and increase innovation while focusing on comparative advantage.

Promoting economic freedom in developing or repressed countries is a crucial pillar of America’s strategic foreign policy engagement that not only will advance U.S. interests, but also cement foundations of free-market principles and defend democratic values.

By using U.S. economic diplomacy in this unique way, America has practical opportunities to help women become agents of real and measurable changes in their home countries.

How China’s Economic Freedom Deficit Distorts Markets Beyond Its Borders