Celebrating Earth Day by Increasing Economic Freedom Around the World

Celebrating Earth Day by Increasing Economic Freedom Around the World

The Heritage Foundation’s annual Index of Economic Freedom strongly suggests that this command-and-control approach to “going green” is fundamentally misguided.

Countries with greater economic freedom tend to fare better on protecting the environment than countries that have more intrusive environmental governance.

It’s economic freedom that will save the earth.

Apart from health care, no other big government policies and actions are more intrusive and economically distortionary than environmental regulations.

Rather than relying on civil society, free markets, and a free press to ensure environmental quality and safeguards, a myriad bureaucrats and agencies in governments and international organizations around the world have created massive command-and-control mechanisms to micromanage behavior in ways they regard as environmentally sound.

Some governments proposed programs to tax carbon emissions and increase taxes on gasoline. Others set up nontransparent, economically harmful exchanges and marketplaces for buying and selling carbon emissions. Still others created subsidies for “clean” energy.

Such policies, even if occasionally effective in their immediate goals, can impose huge direct and indirect costs on society, not least by retarding rates of economic growth.

There is a better way.

The Heritage Foundation’s annual Index of Economic Freedom strongly suggests that this command-and-control approach to “going green” is fundamentally misguided.

For over two decades, the index has measured economic freedom in countries worldwide. Our historical evidence and volumes of supportive social science research demonstrate that economic freedom is good not only for individual economic advancement, but for the progressive values and public goods that many seek for society as a whole.

Not so sparingly, as shown in the chart below, the same free-market principles that have proven to be the key to economic success also can deliver environmental success and point the way to an approach that advances both concerns. 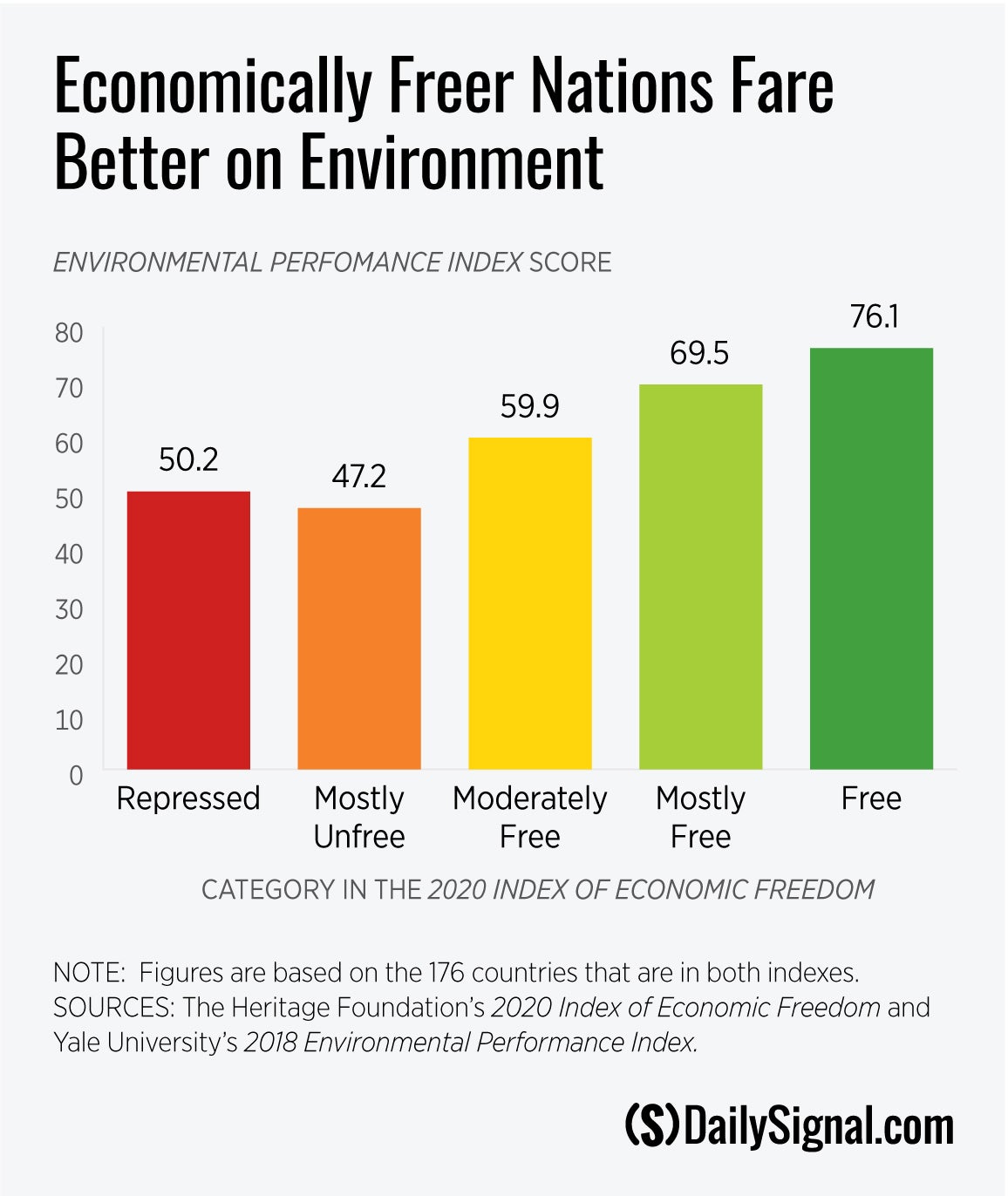 The most remarkable improvements in clean energy use and energy efficiency over the past decades occurred not as a result of government regulation but because of advances in economic freedom that enhanced regulatory efficiency and market openness facilitated by greater degrees of dynamic trade.

The regulatory power of the marketplace, generally ignored and certainly underappreciated by advocates of big government, pushes ?rms to identify ever more efficient means of production and respond to consumer demands for environmental cleanliness and sustainability.

The end result is a virtuous cycle of investment, innovation (including in greener technologies), and dynamic economic growth.

The liberating character of economic freedom has proven over and over, in countries around the world, to empower people, create positive forces of opportunity and innovation, and nourish overall well-being–including through a cleaner environment.

So let’s celebrate Earth Day with a renewed commitment to economic freedom.