The world economy is “moderately free,” with another rise in economic liberty leading to a sixth annual global increase, according to the editors of the 2018 Index of Economic Freedom, released today by The Heritage Foundation.

Among the 180 countries ranked, scores improved for 102 countries and declined for 75. Only three remained unchanged.

“Thus, a total of 96 economies—more than half of all nations and territories graded in the 2018 Index—provide institutional environments in which individuals and private enterprises benefit from at least a moderate degree of economic freedom in the pursuit of greater economic development and prosperity,” the Index editors write.

Per capita incomes are much higher in nations that are more economically free, the Index editors note. Economies rated “free” or “mostly free” in the 2018 Index enjoy incomes more than double the average levels in other countries, and more than five times higher than the incomes of people living in “repressed” economies.” 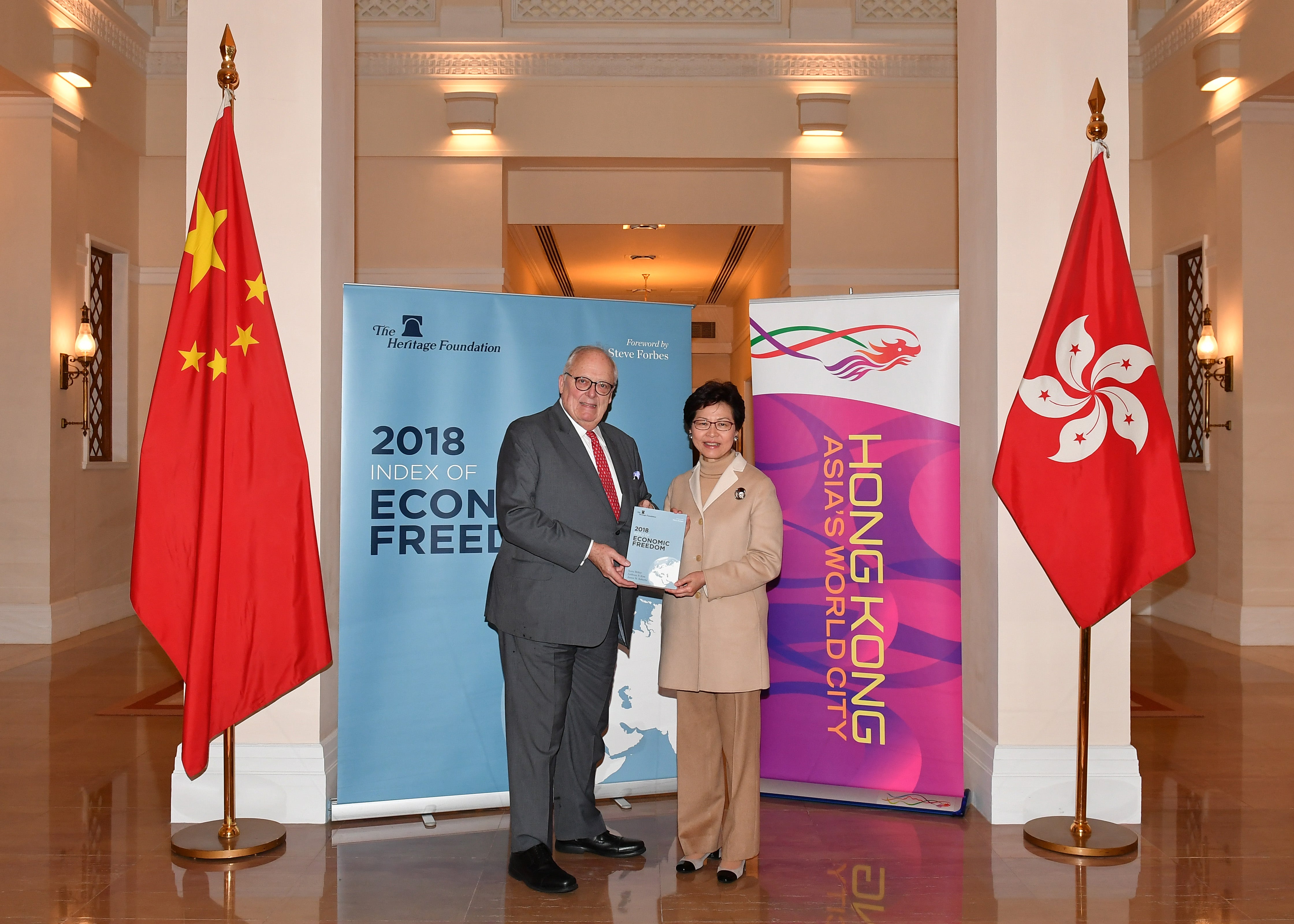 HONG KONG—Dr. Edwin Feulner, founder of The Heritage Foundation, presents a copy of the 2018 Index of Economic Freedom to Carrie Lam, Chief Executive of Hong Kong SAR. For the 24th year in a row, Hong Kong’s economy is rated as the world’s freest.

The United States managed to halt its recent slide, recording a score of 75.7, more than half a point above its 2017 score (its lowest score in Index history). Ranked No. 18 globally, it remains “mostly free” and rose in the regional rankings, thanks in part to a 1.3-point decline in Chile’s score, to become the second-freest economy in the Americas region (behind Canada, which dipped to 9th place globally). “The decade-long decline in America’s economic freedom may have been halted,” the editors write.

Hong Kong and Singapore each logged increases in their Index scores, finishing first and second in the rankings for the 24th consecutive year. Three other frequent top 10 finishers -- New Zealand (3rd globally), Switzerland (4th) and the United Kingdom (8th) -- also saw their scores rise, though not nearly as much as Ireland (6th), which saw a 3.7-point increase.

Despite a modest 0.1-point dip in its score, Australia retained its hold on the No. 5 spot globally. Estonia’s score dropped as well, by 0.3 points, to give the former Soviet state a 7th place finish. Last year’s surprise newcomer to the top 10, the United Arab Emirates, improved its Index score by 0.7 points to take the 10th spot.

The Index groups the world’s countries into five regions: the Americas, Asia-Pacific, Europe, Middle East/North Africa and Sub-Saharan Africa. Individual rankings and write-ups for each country can be found online at heritage.org/index/ranking.

“It is not massive redistributions of wealth or government dictates that produce the most positive social outcomes,” the editors write. “Instead, mobility and progress require lower barriers to market entry, freedom to engage with the world, and less government intrusion.”

An interactive version of the Index, including full text, charts and graphs is available online at heritage.org/index. A hard-copy version totaling 470 pages may be downloaded there, as well.