One need not look far for evidence that the costs of a college degree are skyrocketing. The average college student pays more than $23,000 per year on tuition, fees, room, and board at a baccalaureate degree-issuing institution, up from an inflation-adjusted total of just over $9,000 in 1960. For today’s typical student, an undergraduate degree costs just short of $100,000—assuming it is completed in 4 years. The costs of private colleges and universities have grown at an even faster rate, with many charging nearly double the national average. Outstanding student loan debt currently stands at a staggering $1.5 trillion dollars, or more than twice the annual budget of the Department of Defense.

Despite the obvious problem of spiraling costs, as well as growing political agitation on the far left to cancel student debt, almost no attention is being paid to the more fundamental question of how college expenses ever reached this stage in the first place. Answers from the academy itself range from self-serving demands for more taxpayer support, direct and indirect, to conspiratorial allegations about the takeover of academia by “neoliberalism,” or the alleged “corporatization” of the college degree.

Yet none of these explanations holds water. Federal student grants and loan subsidies have both increased roughly five-fold in the past 30 years. The supposed “neoliberals”—a popular pejorative term for free-market economic beliefs—are nowhere to be found in the ranks of college faculty or administrators, both of whom self-identify solidly on the political left. And most universities operate in a bureaucratic style that has more in common with the DMV than a profit-generating corporation.

A more likely driving force behind the cost explosion may be found by looking to the basic incentives of university governance, and how its employees respond to them. More specifically, academia appears to be highly susceptible to a process that economists call rent-seeking.

In its basic form, rent-seeking refers to the practice of manipulating the rules of exchange to benefit oneself at the expense of others—to essentially extract a rent through non-market allocation. In the public sphere, this might entail a corn farmer lobbying the government to mandate ethanol additives in gasoline, thereby guaranteeing himself a stream of business that he would not otherwise have. In academia, it involves the manipulation of how tuition dollars are spent, generally directing them away from the efficient provision of an educational credential and into other superfluous uses that mainly keep university administrators and faculty comfortably employed.

Consider the case of an English professor who notices a decline in student demand for English degrees. Since department budgets are usually allocated based on student enrollment, that decline likely portends an unhappy future. It may mean the delay of a new hire in her department, which forces existing faculty to carry a heavier share of the teaching load. And if the trend continues, it could lead to a long-term contraction in the department’s size or even the elimination of the unpopular English major.

Rent-seeking refers to the practice of manipulating the rules of exchange to benefit oneself at the expense of others.

In an unimpeded educational market such a contraction might well be warranted. After all, why should a university offer degrees in a subject that few students want to study? Suppose that our professor comes up with a plan to stave off the bleeding though. Why not make English a required part of the “general education” curriculum that all students must complete in order to graduate, no matter their chosen major? Our English professor might use her position on the faculty’s curriculum committee to lobby for the new class requirement, or even convince colleagues in other departments to support the change by promising spillover benefits for their own programs. After all, it is well known that most students struggle with written composition, and perhaps the additional English class will make them better writers. In short order, the new curricular requirement is adopted and the English department is not only saved by its newly guaranteed stream of students, but continues to expand directly with overall university enrollment.

Our hypothetical English professor has successfully engaged in academic rent-seeking. But more importantly, this exact scenario is actually a common occurrence in higher education. In the early 1970s, according to Ron Smith, writing in the journal College Composition and Communication, the average university required students to take one semester of writing composition—usually taught in the English Department—prior to graduation. Michael Moghtader, Alanna Cotch, and Kristen Hague revisited the issue in 2001, also for College Composition and Communication, and found that the requirement had essentially doubled on most campuses. Although statistics are more difficult to come by in other disciplines, the addition of foreign language requirements and humanities-heavy “first year experience” classes strongly suggests a similar pattern in these subjects as well.

The proliferation of “gen ed” requirements has its roots in the belief that a well-rounded undergraduate education entails exposure to a broad base of knowledge across multiple disciplines. While commendable in theory, there’s actually very little evidence that these classes actually provide this claimed value. In their book, Academically Adrift (2011), sociologists Richard Arum and Josipa Roksa examined the results of the Collegiate Learning Assessment exam, which evaluates students on critical thinking skills, problem-solving, and written communication at the start of their freshman year and the conclusion of their sophomore year. This two-year period coincides with the time that undergraduates complete their mandatory “gen ed” curriculum before moving into the specialized classes of their major. The average student shows almost no discernible improvement across any of the categories measured.

As it turns out though, “gen ed” classes serve another function. They allow faculty to rent-seek by manipulating curricular requirements in their own favor. Guaranteed enrollment means a bigger budget and more hiring lines for faculty. As expected, the data show that departments that have trouble attracting majors on their own also tend to be overrepresented on the mandatory “gen ed” curriculum and tend to hire more faculty overall. The chart on page 28 provides further evidence of this pattern, showing the ratio of faculty employment by discipline to the number of bachelor’s degrees issued annually. 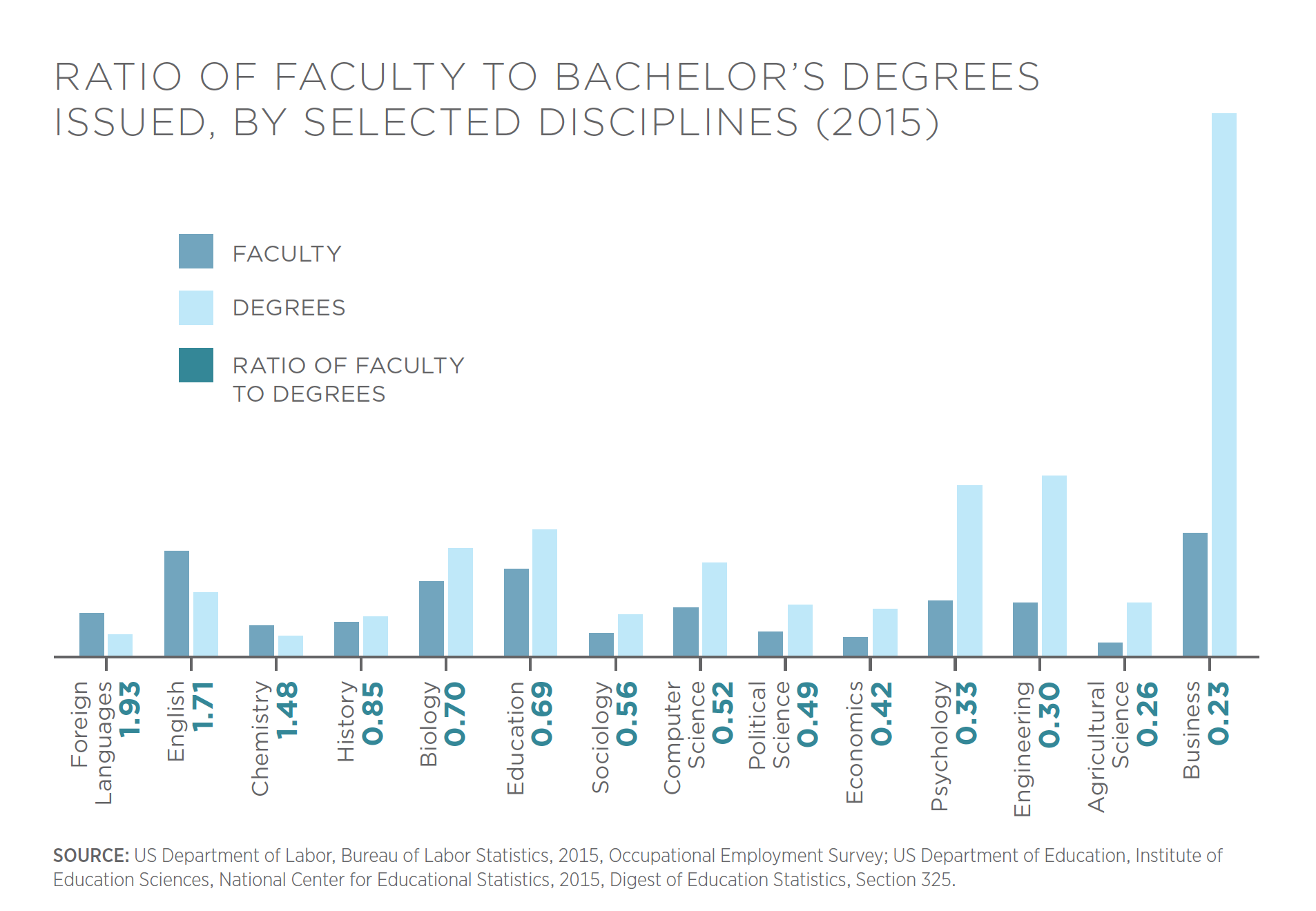 Curiously, struggling majors such as English, history, and foreign languages also tend to have the largest faculties. (Chemistry appears to be an outlier due to the high number of non-teaching faculty who work primarily on scientific research grants.) Growing majors such as business, engineering, and economics tend to be stretched thin relative to the number of students they graduate. “Gen ed” requirements not only provide little demonstrable value to students, they also appear to be expensive make-work programs for faculty in the disciplines that rely on them the most. Most undergraduate degree programs require up to two years’ worth of “gen ed” classes to graduate, which leads to an unsettling implication: a large part of undergraduate tuition is essentially being wasted on superfluous but mandatory classes in order to create jobs for professors in declining disciplines.

Contrary to a popular narrative alleging the “adjunctification” of the universities and the loss of faculty positions, full-time faculty hiring has expanded almost every year since records were first aggregated in the 1970s. The pattern has maintained an almost perfect 25:1 ratio of enrolled students to faculty hires, although as noted most of these new positions counterintuitively go to less popular subjects due to the manipulation of curricular requirements. Yet faculty are not the only expanding feature of the university system. As the figure on page 29 illustrates, many of higher education’s budgetary strains may be traced to the unprecedented expansion of administrative bureaucracy on campus.

Like faculty, administrators respond to the incentives provided by their role in campus governance. Unfortunately, that translates into multiple opportunities to seek rents. As in the public sector, university bureaucrats usually approach their positions by trying to expand the size and purview of their own budgets, and by ensuring their own long-term job security. The result is a continuous pattern of mission-creep, where ever-larger shares of the university budget are devoted to peripheral functions with little connection to classroom instruction.

Most of higher education’s administrative bloat comes not from university executive salaries, but rather through mid-level bureaucrats performing non-essential tasks. Over the past 40 years we’ve witnessed an explosion in peripheral functions of this type: in student services offices that focus on “campus life” and extracurricular activities; in hotel-style dormitories; in campus recreation centers with luxury amenities such as rock-climbing walls or even “lazy river” aquatic features; and in “activist” functionaries with political mandates, such as “Diversity Offices” and “Offices of Environmental Sustainability.” Many of these features did not even exist a few decades ago; today they are central parts of the university budget, with little evidence that they add any value. For instance, a recent empirical study by Steven W. Bradley, published by the National Bureau of Economic Research, looked at 462 institutions and found essentially zero evidence that the addition of campus diversity officers improved the hiring or retention of underrepresented minorities within university faculty. 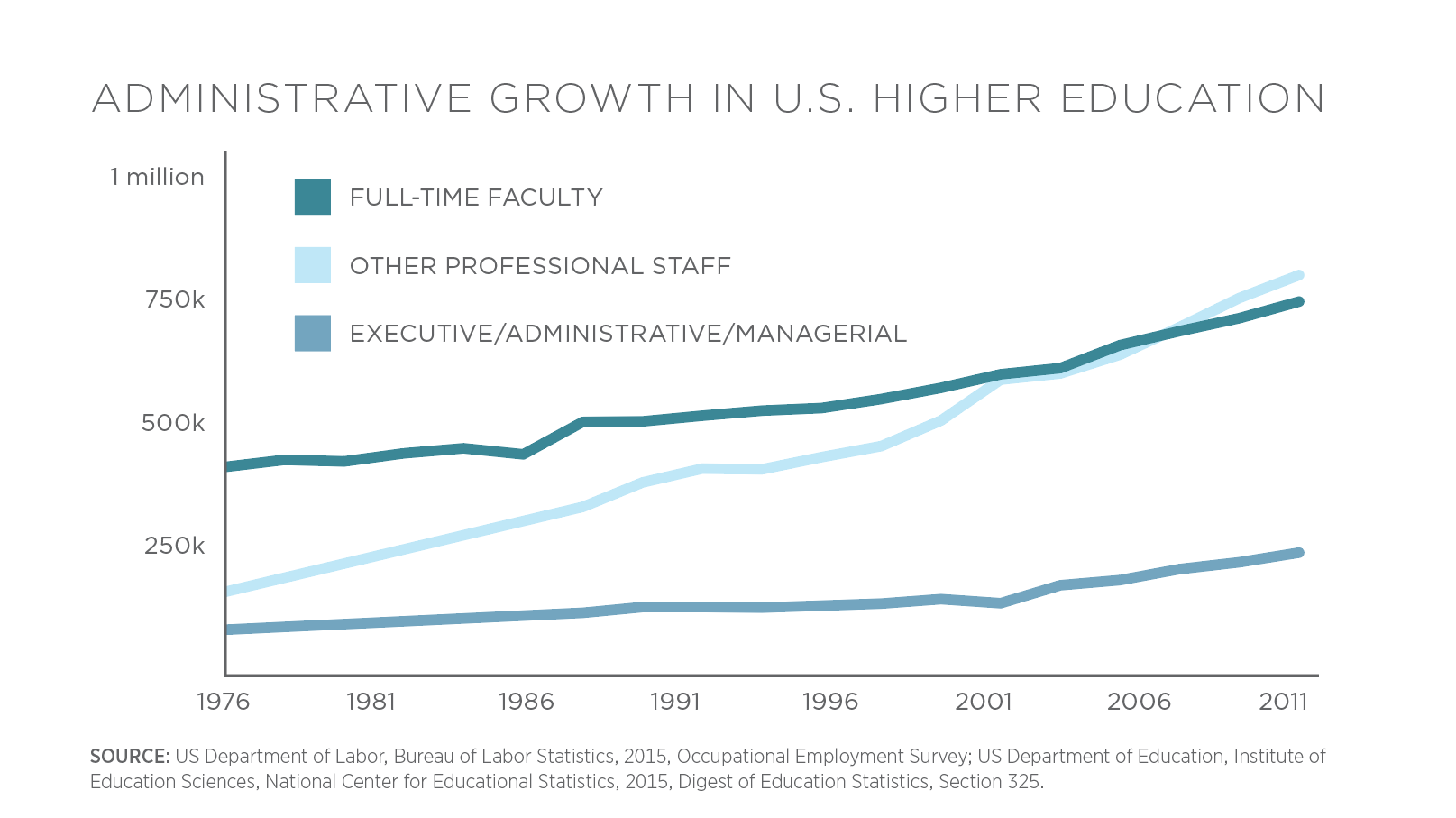 In fact, administrative growth is an entirely rational response to the perverse incentives of our higher education model. Coveted ranking systems such as U.S. News and World Report actually reward colleges for spending more money on both instruction and student services. At the ground level, colleges frequently highlight their own luxury amenities to visiting prospective students in a competitive race to boost their applicant numbers and market their campuses. Strategically minded administrators also expand their own footprints on campus by inventing “new” functions that service small but vocal constituencies within the student body, be they environmental activists, rock-climbing enthusiasts, or student government officials who campaign on bringing more concerts and comedians to campus. The price tag for these functions and the jobs they provide must come from somewhere.

Welcome to the modern rent-seeking campus, where curricular decisions primarily service faculty job security in low-demand subjects, and where university resources are consistently overallocated to superfluous fluff and the administrators who provide it. Rising tuition is a predictable result, further accentuated by the pass-through effects of public subsidies.

Few if any members of the academic workforce actually desire to sustain their jobs and lifestyles on the backs of students. These higher education functionaries are simply responding to bad incentives that accompany the political allocation of university resources. But the unavoidable effect is an ethical quandary where a traditionally not-for-profit enterprise ends up functioning as a transfer mechanism from financially precarious teenagers to comparatively well-off mid-career faculty and professionals.

Mr. Magness is a senior research fellow at the American Institute for Economic Research, and the co-author (along with Jason Brennan) of Cracks in the Ivory Tower: The Moral Mess of Higher Education (Oxford University Press, 2019).