Why do people establish nonprofits? Motivating factors range from making a difference in people’s lives, to addressing an unmet need, to supporting a cause that stirs the passions.

How about: “To spend my day asking people for money”? Said no one ever.

Yet fundraising is the lifeblood of nonprofits, and regardless of the institution’s size and success, the CEO must play an essential role in securing necessary funds. When we ask successful CEOs how much time they spend on fundraising, a typical response is 50 percent or more.

This fact often comes as a shock to newly minted nonprofit leaders: How can they carry out the missions of their organizations if they must devote so much time to asking for money? Moreover, of all the new skills a CEO must acquire, from marketing to financial management, fundraising seems to be the least popular.

But that doesn’t have to be the case. I was fortunate to start my nonprofit career at The Heritage Foundation in the mid-1990s under the leadership of Ed Feulner, a prime example of a CEO who embraced his role in leading the fundraising effort. Since then, I’ve had the opportunity to work with well over 130 nonprofits in the freedom movement. Along the way, I’ve discovered that successful fundraising CEOs share a number of characteristics.

Set the tone. The CEO has the opportunity to shape the entire organization’s perspective on fundraising and philanthropy. Words matter. If the CEO says “We have to hit up that donor for money,” for example, then he encourages a shortsighted, transactional view of fundraising. If he speaks of donors as respected partners, his fundraising team will build long-term relationships that increase in value over time.

Prioritize it. Heritage board member, leadership expert, and international speaker Brian Tracy often tells his audiences to “eat a frog first thing each morning.” In other words, do the most difficult or distasteful task first so that you can be more productive the rest of the day. Some nonprofit leaders view fundraising as a frog. They worry about the results of fundraising on a daily basis but avoid fundraising activity like the plague! If that’s your case, then put fundraising at the top on your agenda each day. If you have to eat a frog, do it first thing in the morning. If you have to eat two, then eat one after the other.

Play to your strengths and be authentic. A successful CEO once told me that while she enjoys meeting donors, she dislikes speaking to them on the telephone. Since she could meet with donors at most annually, this created a challenge: How do I keep in close contact? She solved this dilemma by writing notes by hand. She keeps cards with her at all times and jots personal notes to donors or prospective donors whenever she has a free moment.

Have the courage to ask. Like public speaking, asking donors for money makes many people weak in the knees. I like to keep in mind that we are asking friends for money—not people who are hostile to our nonprofit missions. If that still makes you nervous, then get the training you need to overcome your fear. Fundraising may never come naturally, but you can acquire essential skills to improve your outcomes.

As the stakes get higher, the CEO plays a more strategic role with a smaller pool of donors.

Expect your role in fundraising to grow and change. As the stakes get higher, the CEO plays a more strategic role with a smaller pool of donors. He will also spend more time cultivating board members and raising the visibility of the organization. Ask your fundraising team or outside counsel to evaluate your time and commitments so that you can focus on the highest-value activities.

Keep focused on a key asset. Building a strong board is a CEO’s central role and can pay many dividends to the nonprofit in the years ahead. A board of directors that is engaged and willing to connect your nonprofit to its networks is a valuable fundraising commodity. If your board isn’t committed to securing the necessary financial assets, then it’s time to make some changes.

Seek out other CEOs. Connect with CEOs who are positive and forward thinking about fundraising and learn from them. Most of today’s movement leaders did not start their careers in fundraising but have found ways to excel at it. Learn from the best.

Build a team—but not of “yes men.” Let’s face it: Bosses have a way of avoiding assignments suggested by their staff. A good CEO hires a chief development officer who has a bias for action and pushes the CEO out of his comfort zone when necessary. While I was at Heritage, Ed Feulner relied on the late John Von Kannon to fill that role. John was a talented fundraiser and traveled with Ed many times. Once, after a successful meeting with a donor during which Ed asked for a gift, John congratulated him. Ed replied that he had felt nervous about asking for the gift but more nervous about facing John if he didn’t ask!

Make an investment. A new CEO once shared his operating budget with me. It included all the typical expenses for personnel, programs, and marketing but omitted a line item for fundraising. As they say, it takes money to make money. A well-established nonprofit spends at least 10 percent of its revenue on fundraising. A newer entity might invest much more as it works to acquire new donors. Make sure you are spending enough to reach your goals.

Have the right expectations. One fundraiser alone will not magically achieve your financial goals. It takes a clear vision, impactful programs, a compelling message, a talented team, and consistent execution of tasks. Above all, it takes the CEO’s leadership and engagement at every step of the way.

Be willing to test and innovate. In the early days of The Heritage Foundation, direct-mail fundraising was still in its infancy among think tanks, but Heritage invested in it and continued to experiment and innovate, building one of the movement’s most successful direct-mail programs. In hindsight, the decision looked easy, but it was a risk back then. Today’s leaders should take calculated risks to acquire new donors, using new techniques available today including social media and email. 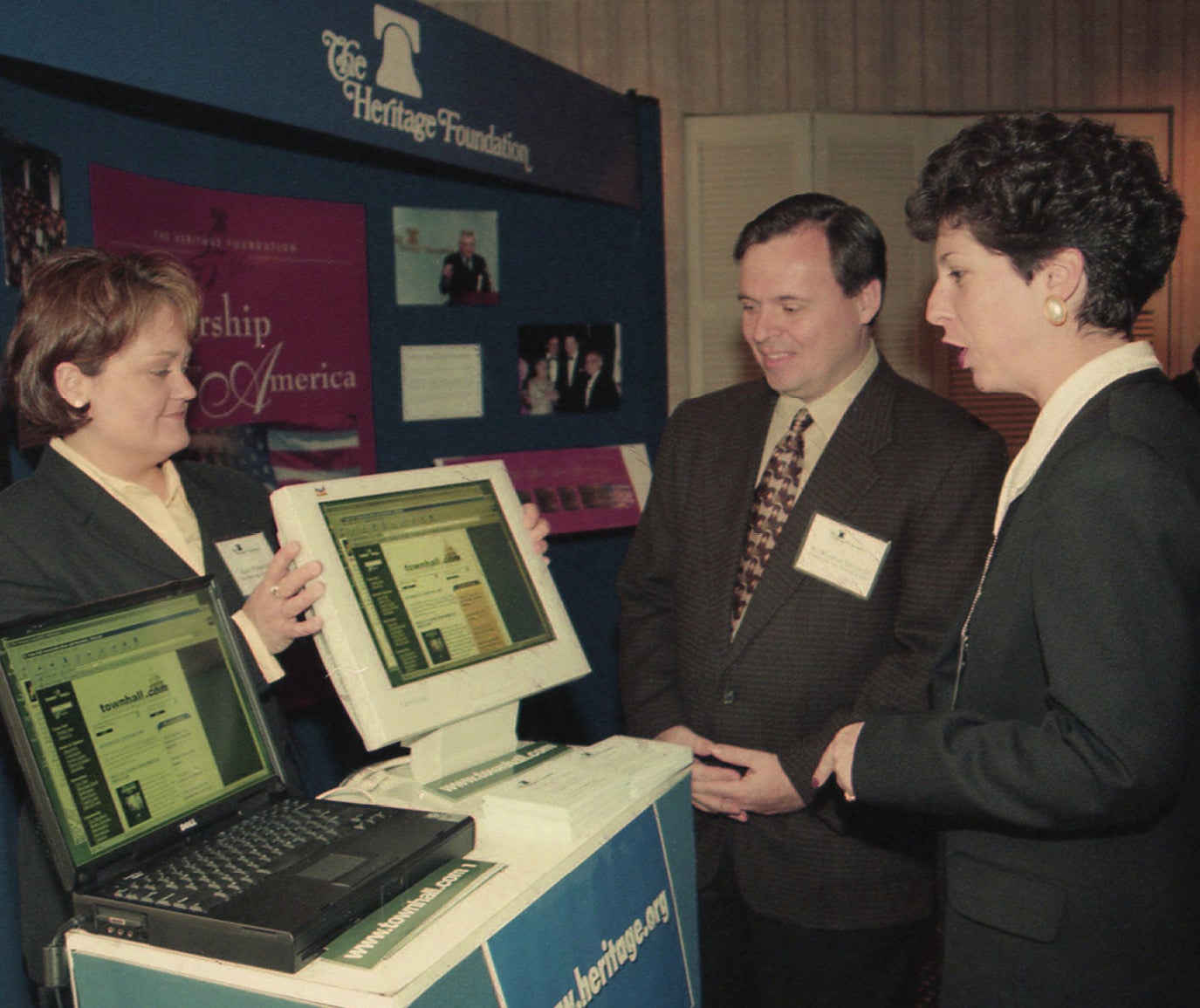 ANN FITZGERALD (right) at The Heritage Foundation booth at the 1999 Resource Bank in Philadelphia. (credit: CHAS GEER/ THE HERITAGE FOUNDATION)

Know what questions to ask. Invest in training for yourself to better understand fundraising techniques and how to measure results. Over the years, I’ve heard CEOs say that particular techniques “never work,” but the reality is that they don’t know how to use those techniques. Whether you are working with a fundraising team or with outside vendors, you need to know the questions to ask to get the best return on investment. For instance, how much should you expect a major gift officer to raise in the first year? Answer: One-and-a-half times his salary. Or, what percentage of first time donors will make a second gift in a successful high-dollar direct mail program? Answer: Fifty percent.

Take the long view. When trying to reach budget goals, it may be difficult to put fundraising in perspective. Patience can be in short supply when we see the pressing needs in our society. It’s easy to fall into the trap of thinking, donor X or Y should give us a gift so that we can address these problems. However, few if any successful fundraising programs are built on donors willing to make huge cash infusions from day one. Be ambitious, but commit to gradually cultivating and soliciting donors for a matter of years.

Focus on the why. When you receive a “no” in fundraising—and there are a lot of noes—it’s easy to get discouraged or feel that fundraising is “begging.” At times like that, remind yourself of your nonprofit’s vision, why it’s important, and how donors help to fulfill that vision. More important, consider how the work you are doing helps donors achieve something meaningful.

Have the courage to say no. Every so often, a donor wants to make a gift for a project that strays from the nonprofit’s core mission. This may create a dilemma, especially if the gift is large. The temptation is somehow to  “make it work.” Ed Feulner always reminded us that programs drive fundraising, not the other way around. If we had to reject this type of gift, we knew that we had the complete support of leadership. This kind of courage kept every fundraiser focused on the mission, not just on the money.

Share the “so what?” Effective fundraisers explain to prospects and donors why their work makes a difference: How is a particular part of the world better for this work? What bad things will happen if this work cannot happen? Why does that difference matter?

Be a philanthropist. Make a personal gift to your organization to set an example for staff and show your commitment to donors. It’s much easier to ask for a gift if you have experienced the joy of giving yourself.

As the old saying goes: No money, no mission. The flip side of that is: No mission, no money. Fundraising cannot work in isolation. It must be woven into the organization’s culture and programs. The successful CEO not only builds a successful fundraising operation, but also creates a culture of philanthropy that infuses every corner of the nonprofit.