(Update: On Tuesday, May 16, the Senate passed Sen. Jeff Bingaman's (D-NM) amendment to S. 2611 that significantly reduced the number of legal immigrants who could enter under the bill's "guest worker" program. As a result of this change, our estimate of the number of legal immigrants who would enter the country or would gain legal status under S. 2611 falls from 103 million to around 66 million over the next 20 years.)

If enacted, the Comprehensive immigration Reform Act (CIRA, S.2611) would be the most dramatic change in immigration law in 80 years, allowing an estimated 103 million persons to legally immigrate to the U.S. over the next 20 years-fully one-third of the current population of the United States.

To understand the provisions of CIRA, largely based on a compromise by Senators Chuck Hagel (R-Nebraska) and Mel Martinez (R-Florida), it is useful to distinguish between the three legal statuses that a legal immigrant might hold:

A key feature of CIRA is that most immigrants identified as "temporary" are, in fact, given convertible status with a virtually unrestricted opportunity to become legal permanent residents and then citizens.

Another important feature of both CIRA and existing immigration law is that immigrants in convertible or LPR status have the right to bring spouses and minor children into the country. Spouses and dependent children will be granted permanent residence along with the primary immigrant and may also become citizens. In addition, after naturalizing, an immigrant has the right to bring his parents into the U.S. as permanent residents with the opportunity for citizenship. There are no numeric limits on the number of spouses, dependent children, and parents of naturalized citizens that may be brought into the country. Additionally, the siblings and adult children (along with their families) of naturalized citizens and the adult children (and their families) of legal permanent residents are given preference in future admission but are subject to numeric caps.

Four key provisions of CIRA would result in an explosive increase in legal immigration.

After receiving amnesty, illegal immigrants would spend six years in a provisional status before attaining LPR status. After five years in LPR status, they would have the opportunity to become naturalized citizens and vote in U.S. elections. As well, the spouses and dependent children of current illegal immigrants would have the right to enter the U.S. and become citizens.[2] There would be no numeric limit on the number of illegal immigrants, spouses, and dependents receiving LPR status; under the amnesty provision, such individuals would not be counted against any other cap or limit in immigration law.[3]

The New "Temporary Guest Worker" Program: CIRA creates an entirely new "temporary guest worker" (H-2C) program. There is nothing temporary about this program; nearly all "guest workers" would have the right to become permanent residents and then citizens.

The spouses and minor children of guest workers would also be permitted to immigrate to the U.S.[6] When guest workers petition for LPR status, their spouses and children would receive it as well. Five years after obtaining LPR status, these spouses could become naturalized citizens. The bill sets no limit on the number of spouses and children who could immigrate under the guest worker program. After workers and their spouses have obtained citizenship, they would be able to bring in their parents as legal permanent residents.

The bill does provide numeric limits on the number of guest workers who can enter the country each year, but the number starts high and then grows exponentially. In the first year, 325,000 H-2C visas would be given out, but if employer demand for guest workers is high, that number could be boosted by an extra 65,000 in the next year. If employer demand for H-2C workers continues to be high, the number of H-2C visas could be raised by up to 20 percent in each subsequent year.

The 20 percent exponential escalator provision allows the number of H-2C immigrants to climb steeply in future years. If the H-2C cap were increased by 20 percent each year, within twenty years the annual inflow of workers would reach 12 million. At this 20 percent growth rate, a total of 70 million guest workers would enter the U.S. over the next two decades and none would be required to leave. While it is unlikely that so many workers would enter, the program does have the potential to bring ten of millions of immigrants to the U.S.

The "guest worker" program, then, is an open door program, based on the demands of U.S. business, that would allow an almost unlimited number of workers and dependents to enter the U.S. from anywhere in world and become citizens. It is essentially an "open border" provision.

Additional Permanent Employment Visas: The U.S. currently issues around 140,000 employment-based visas each year. Under CIRA, the U.S. would issue 450,000 employment-based green cards per year between 2007 and 2016.[8] After 2016, the number would fall to 290,000 per year.[9] Under current law, LPR visas going to the spouses and children of workers with employment-based visas are counted against the cap. Under CIRA, these spouses and children would be removed from the cap and given legal permanent residence without numeric limits.[10] Historically, 1.2 dependent relatives have entered the U.S. for each worker under employment-based immigration programs.[11] This means that some 990,000 persons per year would be granted LPR status until 2016 and, after that, 638,000 per year.

Most provisions of CIRA are straightforward; in many categories, the number of future immigrants allowed is either directly stated or can be easily calculated from the law's provisions. In some areas, however, the law's impact is uncertain. To estimate future legal immigration under the bill, three assumptions have been used in this paper: 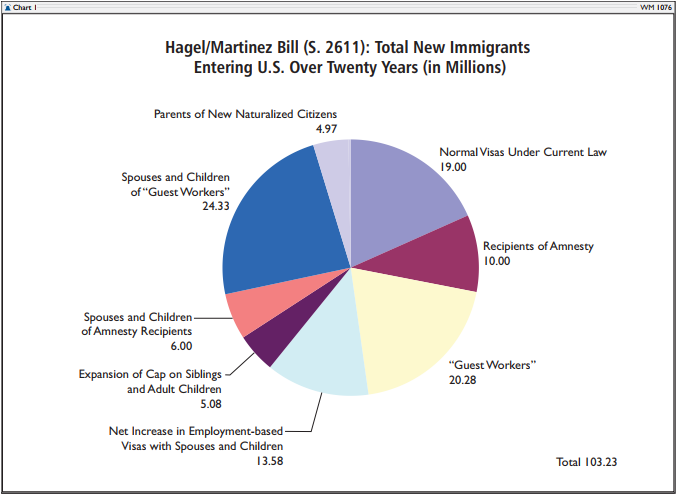 A Flood of legal Immigrants 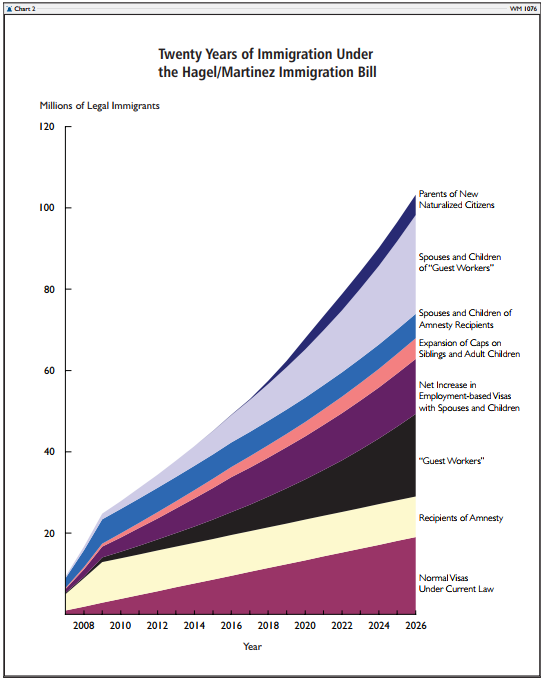 Overall, the bill would allow some 103 million persons to legally immigrate over the next twenty years. This is roughly one-third of the current population of the United States. All of these new entrants would be permanent residents and would have the right to become citizens. This would be a 84 million person net increase over current law.

The figure of 103 million new legal immigrants is based on the assumption that immigration under the guest worker program would grow at 10 percent per year. If guest-worker immigration grows at the maximum rate permitted by the bill, 20 percent per year, the total number of new immigrants coming to the U.S. over the next twenty years would be 193 million. On the other hand, if immigration under the H-2C program did not increase at all for two decades but remained fixed at the initial level of 325,000 per year, total legal immigration under CIRA would be 72 million over twenty years, or more than three times the level that would occur under current law. (See Chart 3.)

The tables in the Appendix show annual inflows of total legal immigrants in each of the eight channels mentioned above over the next twenty years. The tables show the estimated yearly rate of immigration under three scenarios for the H-2C program: zero growth, ten percent growth, and twenty percent growth. 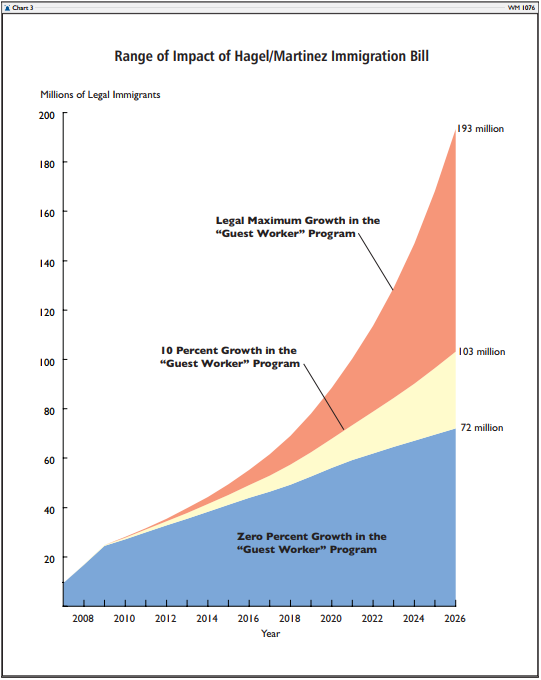 Between 1870 and 1920, the U.S. experienced a massive flow of immigration known as the "great migration". During this period, foreign born persons hovered between 13 and 15 percent of the population.[17]In 1924, Congress passed major legislation greatly reducing future immigration. By 1970, foreign born persons had fallen to 5 percent of the population.

In the last three decades, immigration has increased sharply. The foreign born now comprise around 12 percent of the population, approaching the levels of the early 1900's. However, if CIRA were enacted, and 100 million new immigrants entered the country over the next twenty years, foreign born persons would rise to over one quarter of the U.S. population.[18] There is no precedent for that level of immigration at any time in U.S. history.

If enacted, CIRA would be the most dramatic change in immigration law in 80 years. In its overall impact on the nation, the bill would rival other historic milestones, such as the creation of Social Security or Medicare.

The bill would give amnesty to 10 million illegal immigrants and quintuple the rate of legal immigration into the U.S. Under the bill, the annual inflow of immigrants with the option of becoming legal permanent residents would rise from the current level of one million per year to more than five million per year. Within a few years, the annual inflow of new immigrants would exceed one percent of the current U.S. population. This would be the highest immigration rate in U.S. history.

Within 20 years, some 103 million new immigrants would enter the U.S. This number is about one-third of the current U.S. population. All of these immigrants would be permanent residents with the right to become citizens and vote in U.S. elections. CIRA would transform the United States socially, economically, and politically. Within two decades, the character of the nation would differ dramatically from what exists today.

[6] See S.6211, Section 403 (m)(1). Some might argue that the number of guest workers who would be permitted to attain LPR status would be subject to the overall caps on employment-based permanent visas elsewhere in law. But Section 408(h) of the bill, which deals with the right of guest workers to convert to LPR status, clearly states that "employment-based immigrant visas shall be made available to an alien having nonimmigrant status described in section 101(a)(15)(H)(ii)(c) [the H-2C program] upon the filing of a petition for such a visa." In other word, LPR status shall be granted to any guest worker upon his filing of petition; there is no mention of any numeric cap or other mechanism limits the number of such status adjustments. If the bill's authors intend to limit the opportunity of guest workers to obtain legal permanent residence with a numeric cap, then the bill should explicitly state that fact.

[13] Several factors have not been included in the estimates. The paper ignores future levels of illegal immigration. The paper assumes that there are some 12 million illegal immigrants in the U.S.; this widely used figure rests on the assumption that nearly all illegal immigrants are counted in annual Census surveys. In fact, the number of illegal immigrants in the U.S. may be much larger; this would mean that the number of immigrants eligible for amnesty would also be higher. The paper also assumes that there will be no successful fraud in applications for amnesty; in fact, the standards for proving prior residence and employment in the U.S. are very flimsy. Fraud may be prevalent, further boosting amnesty numbers. Finally, there is no attempt to estimate return to native countries or reverse migration by new immigrants. In effect, the paper assumes that returns will be matched by a corresponding increase in new entrants under the H-2C program.

[14] This number is the net increase in immigration due to the legislation and does not include the secondary family members who would have immigrated under current law.

[15] This number is the net increase in employment-based immigration and does not include persons who would have immigrated under current law.

[18] Currently there are around 35.7 million foreign-born persons in the U.S. (Passel, op.cit., p.3). With a new influx of 103 million immigrants, the total foreign-born population would reach around 124 million (adjusting for deaths in the interim.) Given the massive projected immigration, the population of the U.S. would have swollen to around 449 million by 2027. This would be up from a base projection of around 355 million. (U.S. Census Bureau, 2004, "U.S. Interim Projections by Age, Sex, Race and Hispanic Origin," at http.://www.census.gov/ipc/www/usinterimproj/. The foreign born would comprise around 27 percent of the total population.