Simon is a senior research fellow in the Border Security and Immigration Center at The Heritage Foundation.

There were over 100,000 deaths in America from drug overdoses last year, over half attributed to fentanyl and related drugs.

There does not seem to be any limit for the compassion of progressives when it comes to criminals, but not for their victims.

In San Francisco, Boudin has been sent packing.

Progressive social warriors like Boudin in San Francisco, George Gascon in Los Angeles, Larry Krasner in Philadelphia, and Kim Foxx in Chicago have done massive harm to their cities by abandoning the most essential function of government: assuring the security of life and property.

Not to be forgotten amidst the other social and economic consequences of these leftist prosecutors failing to prosecute criminals is that many criminal aliens are allowed to remain and prosper in the U.S. despite being illegally present and convicted of serious crimes. As Immigration and Customs Enforcement agents are arresting only a quarter of the numbers they did a decade ago (under the Biden administration’s guidance), there are over 10,000 deportable aliens with criminal records loose in this country.

Many of these criminals are drug dealers wreaking havoc across our nation. There were over 100,000 deaths in America from drug overdoses last year, over half attributed to fentanyl and related drugs. “Mexico and China are the primary source countries for fentanyl and fentanyl-related substances trafficked directly into the United States,” according to the Drug Enforcement Agency. These deadly drugs are then shipped to the U.S. through our porous southern border.

For example, on June 5, Customs and Border Protection officers at the Del Rio, Texas, port of entry stopped a shipment of methamphetamine bound for America’s streets valued at $1.6 million. If that number doesn’t sound like a lot, look at the photo below showing six bales of drugs weighing a total of 372 pounds and consider how many lives it could ruin: 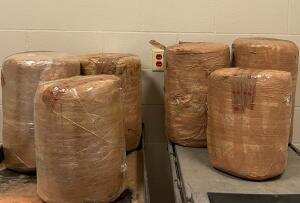 Previously, on May 31, Customs and Border Protection seized over 356 pounds of methamphetamine—worth over $7 million on the street—at the Laredo, Texas, port of entry. And on June 8, at the McAllen-Hidalgo International Bridge in Hidalgo, Texas, CBP seized over $330,000 worth of fentanyl coming in through Mexico.

CBP media releases over the past months show a steady stream of such seized shipments, and one can only speculate about the quantity of drugs that escape detection. Border officers say that smuggling cartels use human trafficking and mass border crossings to divert attention from areas where they want to move contraband, including drugs, convicted criminals, and suspected terrorists.

It is not just the users who suffer from this steady flow of drugs, but the people they rob to fund their habit. That brings us back to San Francisco, where residents have become inured, under Boudin’s unwatchful eye, to having their cars and homes broken into by petty street criminals. Stores have closed in response to looting and shoplifting. Boudin’s policy of “de-carceration” of criminals meant that recidivist nuisances were released on parole without bail. Anyone who would take the word of an addict and release him based on a promise not to commit any more crimes does not understand addiction.

In San Francisco on May 20, Honduran drug smuggler Leydis Cruz was sentenced to three years in federal prison for selling fentanyl and other drugs. However, her arrest and prosecution were not the work of demoralized, defanged local law enforcement, but of federal agents working on the Federal Initiative for the Tenderloin task force—a federal effort to crack down on drug dealing in San Francisco’s roughest district, the Tenderloin.

That the federal government seems to care more than they do about drug overdoses and related crimes in their city is an indictment of San Francisco’s government and its blinkered prosecutor—and that’s saying something given the Biden administration’s problematic policies on policing.

Unlike drug dealers and thieves arrested by city police, Cruz might actually be deported, since she was arrested by federal agents and is not subject to the unhinged clemency of Boudin’s soon-to-be former office.

After completing her sentence, she would be deported by Immigration and Customs Enforcement back to Honduras, where she can no longer threaten American lives by trafficking in lethal drugs.

Ironically, Cruz claims to have left Honduras “to escape physical abuse, poverty, and a hopelessness of not being able to support her family,” according to her lawyer. She chose to furnish that support by devastating American families. Cruz has already been deported once for breaking our laws, and if Boudin were still in charge, she’d undoubtedly be allowed to stay this time, too.

Prior to his recall, Boudin had been accused of deliberately lowering the charges against certain drug dealers to avoid having them (justly) deported. Why does he believe an illegal alien’s claim to remain in the United States trumps the right of San Franciscans to live safely in their own community? Boudin seemed to prefer that San Francisco be a so-called sanctuary city for illegally present foreign criminals rather than a safe city for the lawful residents who elected him.

According to the San Francisco Chronicle, “A substantial number of drug dealers in the city are Honduran nationals.” An offense of drug dealing would—rightly—make it harder for them to advance their immigration status through legal means. Under the Immigration and Nationality Act, serious criminal activity—and particularly, dealing drugs—is a bar to becoming a permanent U.S. resident and later citizen. This is as it should be.

When questioned by angry residents about drug dealing in their neighborhoods, Boudin admitted that “a significant percentage of people selling drugs in San Francisco, perhaps as many as half, are here from Honduras” but sympathized with them as potential victims of human trafficking.

In 2021, his office convicted only three drug dealers, compared with at least 90 convicted under his predecessor in 2019. Boudin’s office allowed three quarters of the fentanyl dealers they prosecuted to cop to a lesser charge, “accessory after the fact,” that would not affect their immigration future.

There does not seem to be any limit for the compassion of progressives when it comes to criminals, but not for their victims. Cruz, the Honduran drug distributor, was dealing in a contraband substance from which more Americans die than die from gunshots. Nearly 500 people died from fentanyl overdoses in San Francisco alone in 2021.

It’s not just conservatives who want safer streets—the San Francisco voters who just recalled Boudin are overwhelmingly liberal. The social havoc, addiction, and death attributable to drugs dealt by deportable foreign criminals—many of whom are in our country illegally in the first place—is utterly preventable.

Boudin and the other ultra-progressive district attorneys, woke local governments that refuse to blame criminals and punish crime, and their accomplices in the national media who either don’t cover or selectively cover crime stories to serve their ideological narrative all share the blame.

In San Francisco, Boudin has been sent packing. Perhaps this is a turning point in the national mood, when people can engage in fixing social problems but refuse to accept the broken solutions of the left that end up only making those problems worse.