Stopping the Chaos: A Proposal for Reorganization of Congressional Oversight of the Department of Homeland Security

Stopping the Chaos: A Proposal for Reorganization of Congressional Oversight of the Department of Homeland Security

Note: This WebMemo is the work of a series of roundtables organized by The Heritage Foundation on congressional oversight of homeland security.

It has been seven years since the Department of Homeland Security (DHS) was created, and yet Congress has still not reformed oversight of homeland security. The lack of congressional action has become something of a joke, even catching the attention of institutions like National Public Radio that would normally dismiss oversight of a department as an “inside the Beltway” issue.[1]

It is time, and past time, to recognize that congressional parochialism and inaction have become a drag on American security.

The current situation, to be fair, is partly a product of how DHS was created—pieced together from 22 separate agencies. Rather than consolidate congressional oversight of all these agencies at the same time—a move that would have caused tremendous political anguish in Congress—congressional leadership chose to leave oversight of various sub-activities of DHS with each of the original committees. This archaic system, however, continues to prevail despite a stronger, more unified, and more permanent DHS lessening, if not altogether eliminating, the need for individualized jurisdiction.

Congress, however, remains addicted to this system, with individual Members simply unwilling to say farewell to their slice of security oversight. As a result, DHS, as one department, must answer to more than 100 committees and subcommittees ranging from Agriculture to Finance to Energy and Commerce—all of which are ones that the average American would have a difficult time understanding as being responsible for homeland security. In fact, as the department has become a more unified body over the past seven years, oversight has done the opposite. The number of committees and subcommittees with oversight has only grown from 86 to 108 today.

This is not to say that oversight, or even robust oversight, over DHS is the wrong approach. Strong homeland security oversight is both proper and necessary. Furthermore, the oversight problem is more than one of workload for the department, despite the fact that the workload of responding to more than 100 committee and subcommittees has become at times overwhelming. This debilitating proliferation of congressional review has significant adverse effects on national security: It frustrates the ability of Congress to provide guidance on how the homeland security enterprise should operate while draining precious departmental resources.

At times the messages coming out of Congress have seemed to conflict or are drowned out altogether. To cite but one example, the recently proposed legislation to revise America’s approach to biological threats had to go through eight different committees in the House of Representatives alone.[4] Further, with so many congressional voices dictating to DHS, there is little cost to the department in ignoring the messages that it dislikes or the policies it wishes not to implement.

Multiple policymakers, congressionally appointed commissions, and institutions have all called for reform of the congressional process. These include both the chairman and ranking members of the House Homeland Security Committee and groups as diverse as the 9/11 Commission, The Heritage Foundation, the Center for Strategic and International Studies, and the Commission on the Prevention of Attacks Using Weapons of Mass Destruction.[5]

It has become apparent that no partial solution will work to effectively solve the issues of chaotic oversight. While it might be possible to pare a few minor committees and subcommittees from the list of those with jurisdiction over DHS, there is little to be gained by cutting the number of subcommittees by, say 25 percent, so that only 80 are now involved—that would do nothing more than return DHS to where it was three years ago in terms of oversight.

Accordingly, a simpler solution would be to consolidate DHS oversight into six and only six full committees—three each in the House of Representatives and the Senate. On the House side, the three committees with jurisdiction over DHS should be the Homeland Security Committee, the Permanent Select Committee on Intelligence, and the Appropriations Committee. The Senate should, likewise, have three parallel committees. 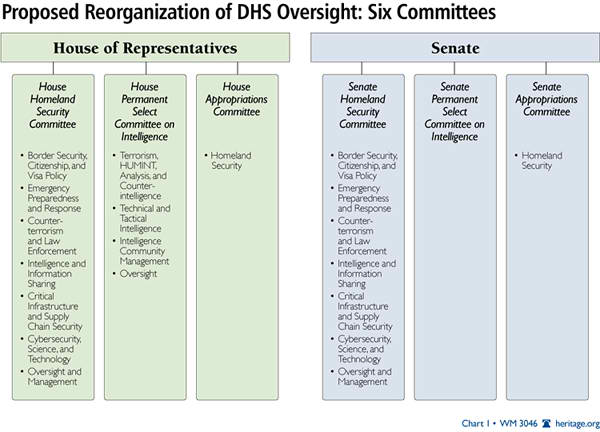 Given the volume of work that would come with such reorganization, it is further recommended that, on the Senate side, the current committee (Homeland Security and Governmental Affairs) be split in two and hive off its homeland security affairs responsibilities to a separate, newly created committee. The virtue of this proposal is that it would precisely mirror how Congress oversees the Department of Defense—the only institution in the executive branch that is in any way comparable to DHS.[6]

The two newly created homeland security committees should each have seven subcommittees, dividing their responsibilities along functional lines relating to existing DHS activities. While any number of ways could be proposed to slice these functions, this paper suggests, notionally, the creation of the following subcommittees:

The benefits of this plan should be obvious. The savings in resources and the avoidance of duplicative briefings will be tremendous. Likewise, though legislation will still have to go through sequential referrals from time to time, there can be little doubt that this proposal would pave the way toward a more streamlined legislative process with concomitant benefits to American security.

Paul Rosenzweig is the Principal at Red Branch Consulting, PLLC, and a Visiting Fellow at The Heritage Foundation. He is a former Deputy Assistant Secretary for Policy at the Department of Homeland Security. Jena Baker McNeill is Policy Analyst for Homeland Security in the Douglas and Sarah Allison Center for Foreign Policy Studies, a division of the Kathryn and Shelby Cullom Davis Institute for International Studies, and James Jay Carafano, Ph.D., is Deputy Director of the Davis Institute for International Studies and Director of the Allison Center, at The Heritage Foundation.

China Is No. 1 Domestic National Security Threat and Biden Administration Won’t Admit It