Green New Deals: Bad for Americans and Bad for Europeans

Green New Deals: Bad for Americans and Bad for Europeans

The American Green New Deal (GND) has far more to do with government control than it does climate control, and the same reasoning can and should be applied to the European GND. Policymakers on both sides of the Atlantic should apply market-based reforms that will drive innovation and economic growth and yield better environmental outcomes. Extremely costly, ineffective climate measures such as the GND will leave Europeans worse off economically and environmentally.

The EU should instead roll back energy subsidies, refrain from new conventional fuels regulations or bans, and keep the door open for nuclear energy.

With an apocalyptic warning that “[c]limate change and environmental degradation are an existential threat to Europe and the world,”REF the European Commission rolled out its “European Green New Deal” in December 2019. The road map, modeled broadly after the U.S. Green New Deal, aims to achieve no net greenhouse gas emissions by 2050.

As Politico reported, European Commission President Ursula von der Leyen described the EU’s Green New Deal (GND) as “Europe’s man on the moon moment.”REF Going even further, the article quotes retired Italian chemistry Professor Vincenzo Balzani as saying that the EU goal to cut Europe’s carbon-dioxide emissions to “net zero” (by sequestering at least as much greenhouse gases as it produces) is “a proposal to remake civilization.”

A European GND would certainly deliver on that promise—but not in the way Professor Balzani intends. The mandates, regulations, and subsidies required to achieve net zero greenhouse gas emissions would drive energy prices higher, disproportionately harming low-income Europeans, and have a negligible impact on climate. Driving out affordable, reliable energy sources for politically preferred ones would reduce living standards and political liberty for everyone living under its decrees, rolling back some of the progress made during two millennia of Western civilization. By inserting more government intervention into the EU economy, a GND would weaken current and future economic freedom.

As Heritage Foundation analysts reported in 2019,REF the proposed GND for the United States would be incredibly costly for American families and businesses—for no meaningful climate benefit. Moreover, the plan would introduce a completely new level of cronyism and corporate welfare that would harm consumers multiple times over. Citizens of the EU should expect the same negative outcomes and lack of environmental benefits if the EU pursues its own GND.

According to the European Commission, the European GND is a new “growth” strategy promising a future European economy “where there are no net emissions of greenhouse gases by 2050 and where economic growth is decoupled from resource use.”REF

Green activists in Europe, like their sympathetic counterparts in the United States, promise that the GND will move to a cleaner, “circular” economy that will make more efficient use of resources, restore biodiversity, cut greenhouse gas emissions, ensure a just and inclusive transition, and aim for an EU that will be “climate neutral” in 2050.REF

To accomplish such a government-managed transformation, the European Commission has proposed a sweeping “European Climate Law” that would convert political commitments on climate “into a legal obligation and a trigger for investment” by mandating “action by all sectors of [the EU’s] economy,” including:

Just as its American cousin would do for Washington, the EU’s GND would perforce translate into more centralization of money and power and more economic central planning in Brussels, where the government would determine what types of energy Europeans produce and consume.

Beyond that, Brussels would use the pretext of the GND to intrude into other areas of peoples’ daily lives, including how Europeans travel, manufacture goods, and produce food. For instance, one change proposed by the commission is to implement “mandatory harmonised front-of-pack nutrition labelling and develop a sustainable food labelling framework that covers the nutritional, climate, environmental and social aspects of food products.”REF Not only would mandatory labeling have the government nudging consumers to buy certain foods; it could also legitimize bad science, such as stigmatizing genetically engineered foods.REF

Similarly, the U.S. GND has ambitions to mandate universal health care, guaranteed jobs with a family sustaining wage, “healthy food security,” and efficient spending on all homes and buildings. In fact, Saikat Chakrabarti, chief of staff to Representative Alexandria Ocasio-Cortez (D–NY), the author of the GND, quite bluntly said that the “interesting thing about the Green New Deal is it wasn’t originally a climate thing at all. Do you guys think of it as a climate thing? Because we really think of it as a how-do-you-change-the-entire-economy thing.”REF

What Would a Green New Deal Cost Europeans?

According to Heritage research, the costs of the U.S. GND in terms of stranded assets, lost shareholder value, and the cost to taxpayers could easily surpass $5 trillion. In addition, in the longer term (through 2040), achieving a fraction of the emissions reductions envisioned in the GND would mean:

Europeans could expect proportionate economic losses over the next two decades. Moreover, as with the U.S. GND, the EU’s GND would be climatically meaningless. As can be seen in Chart 4, even if the EU reduced its emissions 100 percent by 2030, the climate impact would be no more than 0.046 degrees Celsius of averted warming by 2050 and 0.120 degrees Celsius of averted warming by 2100.REF

In addition, as with its U.S. counterpart, the EU GND refuses to consider emissions-free nuclear power or cleaner natural gas as alternatives. The European Green Deal Investment Plan, the “investment pillar” of the EU’s GND, excludes nuclear power, the largest source of emissions-free electricity on the planet.REF One of the many flaws of both the American and European GNDs is the focus on outputs rather than outcomes. The fact that many EU countries fought against the inclusion of nuclear and natural gas speaks to just this fact.REF 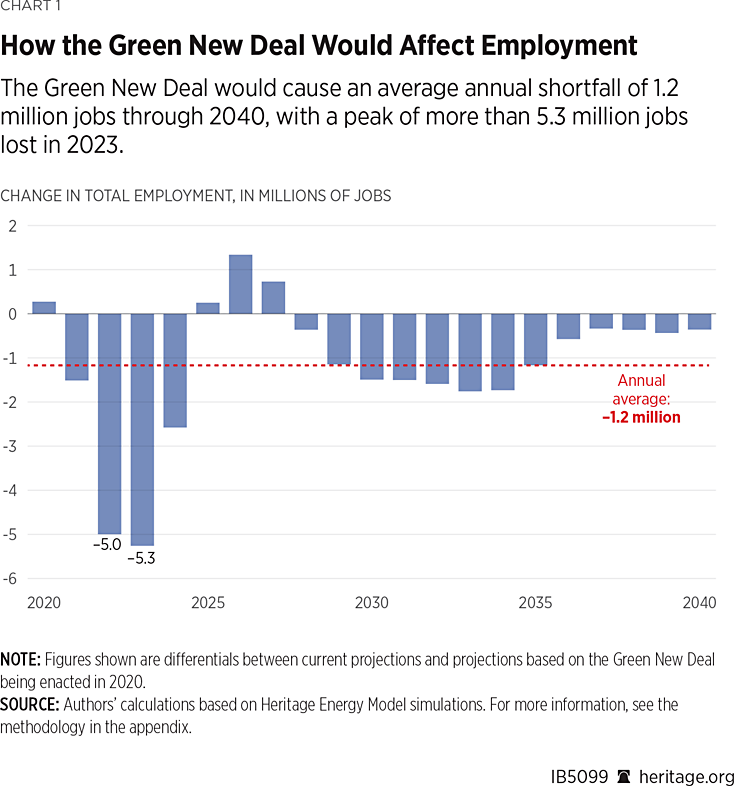 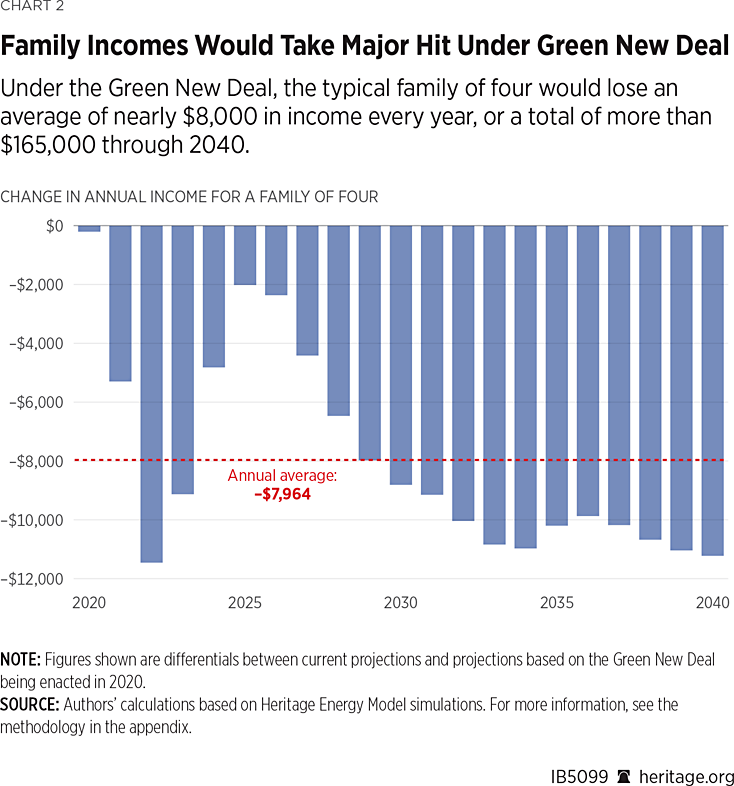 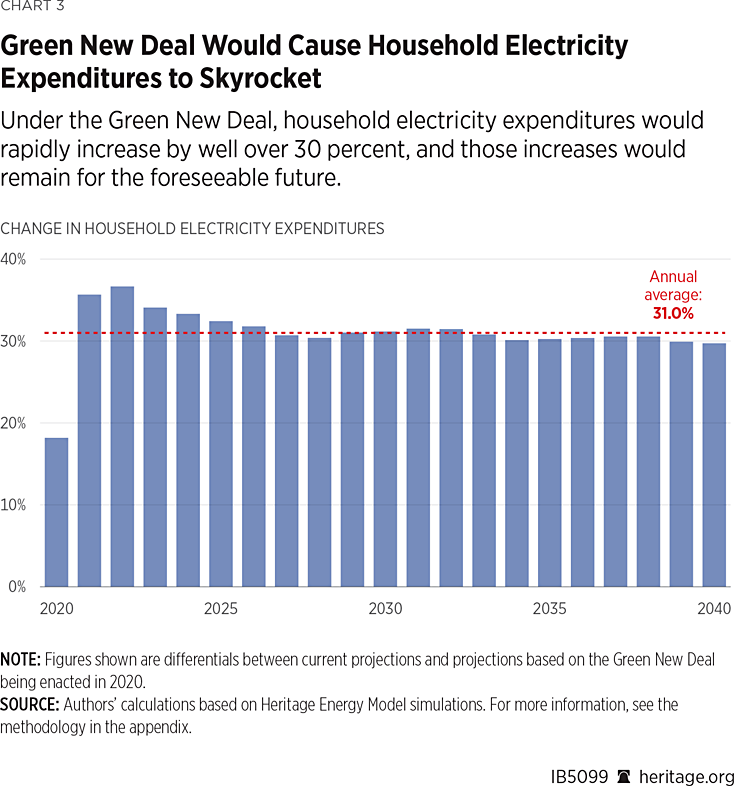 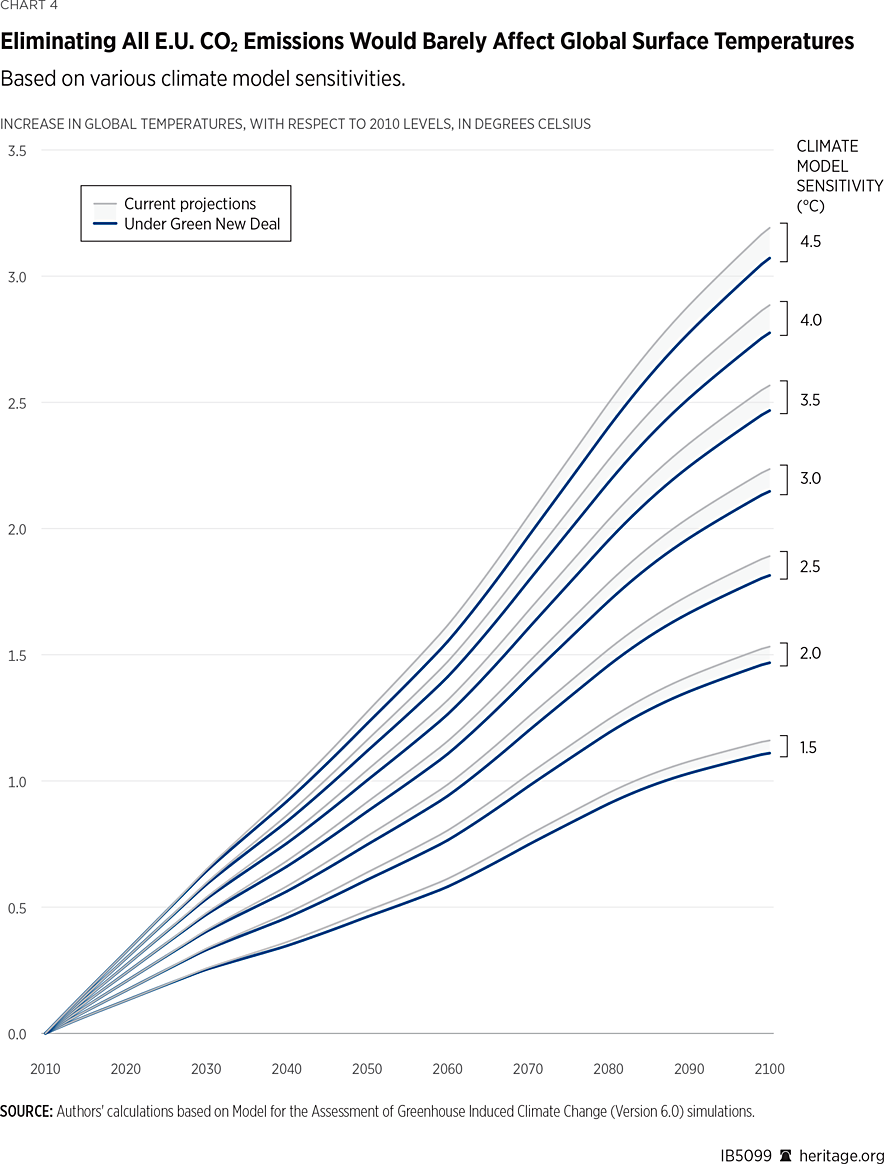 As Heritage analysts have reported, governments in countries such as Venezuela and China routinely mismanage and waste resources or ramp up production with little to no accountability for the environmental damage that comes with it. The absence of price signals reduces the incentive to be more efficient and do more with less. In addition, the absence of property rights reduces the incentive to conserve and gives government-controlled industries a free pass to pollute without compensating or protecting its citizens.REF

Venezuela consistently ranks at the bottom of the annual review of 180 countries in The Heritage Foundation’s Index of Economic Freedom.REF While China ranks higher than Venezuela in the Index, its better performance is attributable, in part, to manipulation of data by the communist dictatorship in Beijing.

Interventions by governments in an economy’s price-setting system and the weakening of property rights and the rule of law through corruption and governmental incompetence are key factors in the Index’s analysis.

The EU is not China or Venezuela, but the more the EU taxes, regulates, and spends through GND-like policies, the more Brussels will erode the economic freedoms of Europeans. By shrinking the EU’s economy by potentially tens of trillions of dollars, the GND will cause lower levels of prosperity and leave Europeans with fewer resources to deal with whatever environmental challenges come their way.

Recommendations for the European Union

The policies proposed in the U.S. GND would disrupt energy markets and skew investment decisions toward politically connected projects. Instead of implementing economically destructive policies of more taxes, regulations, and subsidies, Heritage analysts urged American policymakers at the federal and state level to remove government-imposed barriers to energy innovation. Allowing all forms of energy to compete equally in a free market would enable the United States to make tremendous strides in terms of a healthy economy as well as a healthy environment. That same reasoning would apply to Europe. Moving forward, EU policy should:

Just as Heritage experts concluded that the American GND has far more to do with government control than it does climate control, the same reasoning can and should be applied to the European GND.

Policymakers on both sides of the Atlantic should apply market-based reforms that will drive innovation and economic growth and yield better environmental outcomes. Extremely costly, ineffective climate measures such as the GND will leave Europeans worse off economically and environmentally.

Appendix: The Model for the Assessment of Greenhouse Gas Induced Climate Change

The analysis in this Issue Brief also uses the Model for the Assessment of Greenhouse Gas Induced Climate Change (MAGICC) versions 5.3 and 6.REF The MAGICC model quantifies the relationship between atmospheric radiative forcing, oceanic heat content, and surface temperature perturbation via the following relationship:REF

Climate sensitivity, denoted in the MAGICC model as ΔT2x, is defined as the equilibrium global-mean warming after a doubling of carbon-dioxide concentrations and specified via a reciprocal relationship to a feedback factor λ:

MAGICC also contains a carbon cycle model that incorporates temperature feedback effects. One of the a priori specifications pertaining to this model is a greenhouse gas emissions trajectory. We assumed trajectories specified in the model based on the most recent Intergovernmental Panel on Climate Change Assessment Reports (IPCC).

Using data from Organisation for Economic Co-operation and Development (OECD), we found that the European Union emitted approximately 28% of carbon dioxide emissions with respect to all OECD member nations.REF In our simulations, we altered OECD projections accordingly assuming this fraction to be constant over time beginning in 2030. We also assumed climate sensitivities varying between 1.5 degrees Celsius and 4.5 degrees Celsius, which encompass the range of “likely” sensitivities specified in the IPCC’s “Fifth Assessment Report.”REF The upper bound of this range is significantly higher than that assumed by the Obama Administration’s Interagency Working Group.REF