In addition, making a virginity pledge is not associated with any long-term negative out­comes. For example, teen pledgers who do become sexually active are not less likely to use contraception.

Data from the National Longitudinal Study of Adolescent Health, which is funded by more than 17 federal agencies,[1] show that the behavior of adolescents who have made a vir­ginity pledge is significantly different from that of peers who have not made a pledge. Teenage girls who have taken a virginity pledge are one-third less likely to experience a pregnancy before age 18. Girls who are strong pledgers (defined as those who are consistent in report­ing a virginity pledge in the succeeding waves of the Add Health survey) are more than 50 percent less likely to have a teen pregnancy than are non-pledgers.

Teens who have made a virginity pledge have almost half as many lifetime sexual part­ners as non-pledgers have. By the time they reach their early twenties, non-pledgers have had, on average, six different sex partners; pledgers, by contrast, have had three.

Girls who have taken a virginity pledge are one-third less likely to have an out-of-wedlock birth when compared with those who have never taken a pledge. Girls who are strong pledgers (those who are consistent in reporting a virginity pledge in the succeeding waves of the Add Health survey) are half as likely to have an out-of-wedlock birth as are non-pledgers.

Girls who make a virginity pledge also have fewer births overall (both marital and nonmarital) as teens and young adults than do girls who do not make pledges. By the time they reach their early twenties, some 27.2 percent of the young women who have never made a virginity pledge have given birth. By contrast, the overall birth rate of peers who have made a pledge is nearly one-third lower, at 19.8 percent.

One possible explanation for the differences in behavior between pledgers and non-pledgers is that the two groups differ in important social background factors such as socioeconomic status, race, religiosity, and school performance. It is pos­sible that these background factors-rather than the pledge per se-account for the differences in sexual behavior and birth rates.

To investigate this possibility, the authors per­formed multivariate regression analyses that com­pared individuals who were identical in relevant background factors. These analyses show that, although the magnitude of the differences was reduced somewhat, differences in the behavior of pledging and non-pledging teens persisted even when background factors such as socioeconomic status, race, religiosity, and other relevant variables were held constant.

Overall, making a virginity pledge is strongly associated with a wide array of positive behaviors and outcomes while having no negative effects.[2] The findings presented in this paper strongly sug­gest that virginity pledge and similar abstinence education programs have the potential to substan­tially reduce teen sexual activity, teen pregnancy, and out-of-wedlock childbearing.

For more than a decade, organizations such as True Love Waits[3] have encouraged young people to abstain from sexual activity. As part of these programs, young people are encouraged to take a verbal or written pledge to abstain from sex until marriage. In recent years, increased public policy attention has been focused on adolescents who take these "virginity pledges" as policymakers seek to assess the social and behavioral outcomes of such abstinence programs.

One major source of data on teens who have made virginity pledges is the National Longitudi­nal Study of Adolescent Health, funded by the Department of Health and Human Services and other federal agencies. The Add Health survey started with interviews of junior-high and high-school-aged students in 1994. In that year, and in subsequent interviews, adolescents were asked whether they had ever taken a virginity pledge. The students were tracked through high school and into early adulthood. By 2001, most of the youth in the survey were between the ages of 19 and 25-old enough to evaluate the relationship between pledging as teens and a variety of social outcomes.

As noted, the Add Health survey is longitudinal, which means that it surveys the same group of adolescents repeatedly over time. Inter­views were conducted in three succeeding years: Wave I in 1994, Wave II in 1995, and Wave III in 2001. In each of these years, indi­viduals were asked the ques­tion: "Have you ever signed a pledge to abstain from sex until marriage?" We have grouped the Add Health youth into four catego­ries based on their responses to this repeated question.[4]

All adolescents were first placed in either the non-pledger or pledger category. All pledgers were subsequently placed in the weak or strong pledge categories. The four pledge categories are used throughout this paper to measure the behavioral correlates of pledging. 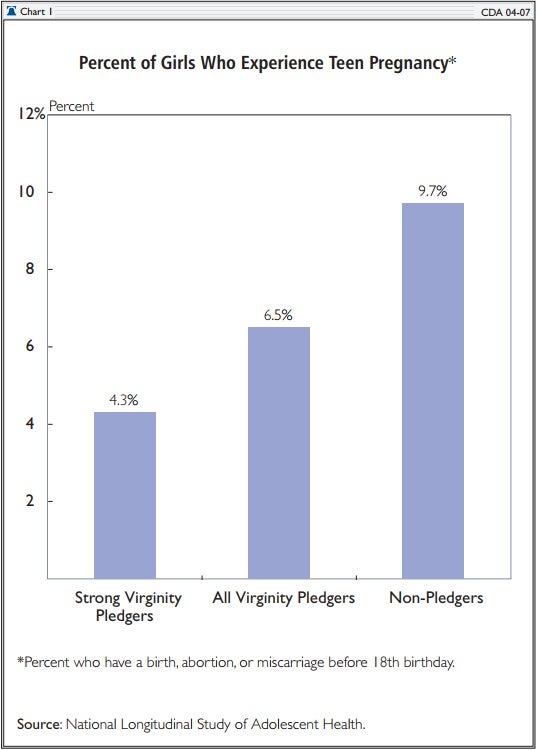 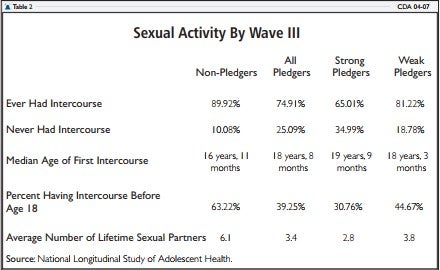 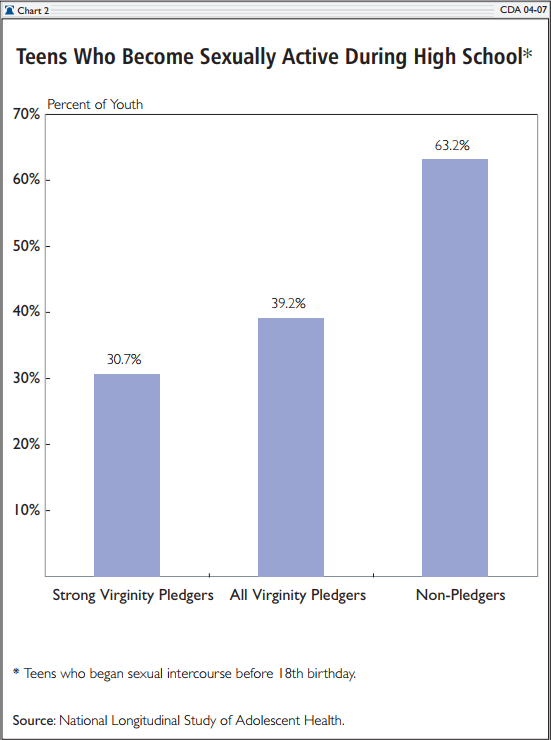 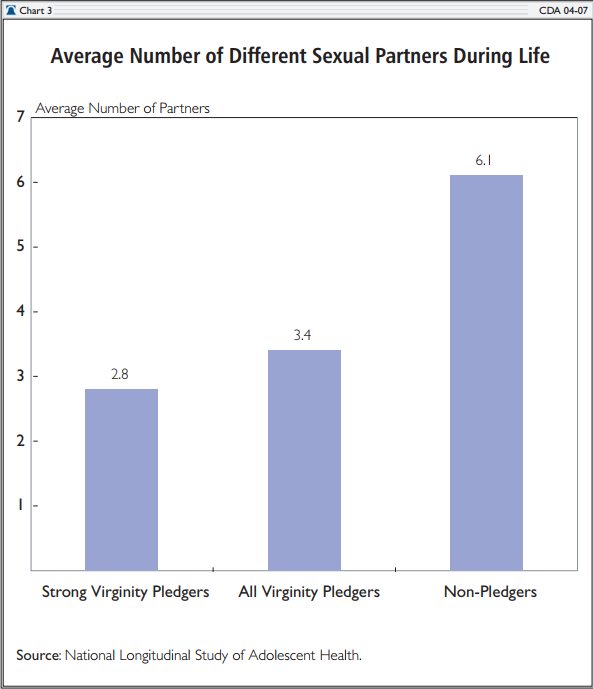 Polls show that over 90 percent of parents want students taught that they should abstain from sexual activity until they have, at least, fin­ished high school.[7] Thus, sexual abstinence throughout high school appears to be a minimal value embraced by nearly all parents. The Add Health data presented in Table 2 show that a strong majority of pledg­ers do abstain through their high-school years, while an equally large majority of non-pledg­ers fail to achieve that goal. As Chart 2 shows, more than 60 percent of all teen pledgers and nearly 70 percent of strong pledgers abstain from sexual intercourse until at least their 18th birthday. By contrast, only 37 percent of non-pledgers abstain until that age. Pledging is clearly linked to reduced sexual activity during the high-school years.

Delay in initial sexual activity is linked to a number of other positive outcomes, particularly to a reduction in the number of sex partners dur­ing one's lifetime. Table 2 and Chart 3 show that teens who have made a virginity pledge report significantly fewer sex partners. Non-pledgers reported having, on average, 6.1 sex partners by the time they reached Wave III of the survey. Among pledgers, the average number of sexual partners was cut roughly in half: 3.4 for all pledgers and 2.8 for strong pledgers.[8]

Other surveys confirm the long-term linkage between early onset of sexual activity and high numbers of sex partners over a lifetime. This linkage persists into adulthood; for example, women who become sexually active in their early teen years are less likely to have stable marriages in their thirties when compared with women who wait.[9] Thus, the relative differences in num­bers of sexual partners between pledgers and non-pledgers at the present time are likely to continue through the individuals' adult lives.

Biden Administration to Force Schools to Adopt Radical Gender Policies. Here’s What You Need to Know.