1. How many students are enrolled in public and private schools in the United States?

According to U.S. Department of Education estimates, there are 47.6 million students in public schools and 5.9 million in private schools.[1] As many as 2 million children are home-schooled.[2]

2. How do U.S. students fare on national assessments?
According to the most recent NAEP assessments, only 31 percent of 4th graders are proficient in reading, while 32 percent are proficient in mathematics, 29 percent in science, and 18 percent in American history. Low-income students did half as well. In fact, over half of poor fourth graders failed to show even a basic level of knowledge in reading, science, or history. [5] 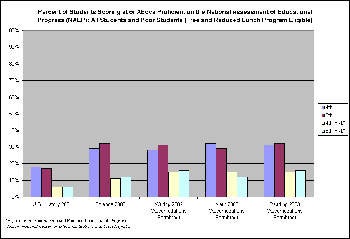 3. What percentage of students graduate from high school and college?

Seventy percent of public school students graduate on time, and less than half of these students are qualified to attend four-year colleges or universities. Roughly half of black and Hispanic students graduate on time. [6] Twenty-six percent of Americans have a bachelor’s or higher degree.[7] Women earn more associate’s, bachelor’s, and master’s degrees and almost half of professional and doctorate degrees.[8]

4. How much do Americans spend on education?

Total federal, state, and local spending for education, both public and private, climbed to $745 billion for the 2001-2002 school year. Sixty-one percent, or $454 billion, was spent on K-12 education. [11] Local funding accounts for approximately 44 percent of pending, state 49 percent, and federal 7 percent. [12] 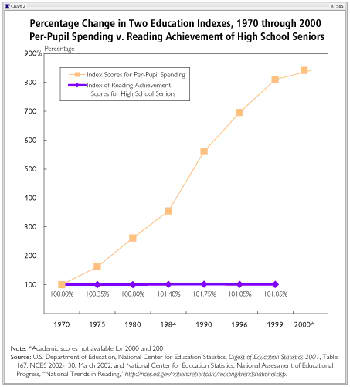 In 2002, taxpayers spent an estimated $108 billion on education at the federal level, of which about 43 percent went through the Department of Education. The Departments of Health and Human Services, Agriculture, Labor, Defense, and Interior also spent large amounts of money. [14]

Fifty-three billion dollars went to elementary and secondary school programs. Just under half of this amount was spent on programs under the Elementary and Secondary Education Act (No Child Left Behind Act) and on special and vocational education. [15] 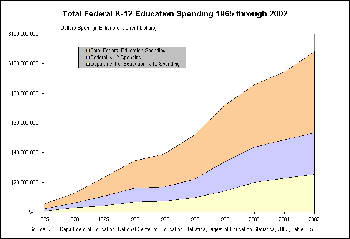 Over half of full-time undergraduates attending four-year colleges and universities receive federal loans or grants. While participation in federal higher education programs was higher among the poor, a quarter of undergraduates from families with incomes over $100,000 received financial aid. Discretionary programs alone cost taxpayers $22.6 billion in 2003.[16]

5. On average, how well are teachers paid?

Generally, teachers earn more on an hourly basis than other educated professionals, including accountants, computer programmers, engineers, and architects. [20]

6. What is the average class size?

According to the most recent Department of Education statistics, the pupil-teacher ratio at public schools is 15.9 to one. The average class size is 21.1 for public elementary schools and 23.6 for public secondary schools. [21]

7. What access do students have to computers and the Internet at school?

As of 2002, 99 percent of public schools have access to the Internet. The ratio of students to computers with Internet access in public schools is approximately 4.8 to one. [22]

8. How do American schools compare with schools in other countries?

On the most recent Program for International Student Assessment combined reading literacy scale tests, American 15-year olds scored near the average. Of the 27 countries that participated, Canadian, Finish, and New Zealand students had the highest scores. [25]


9. How much choice do parents have over their children’s schooling?

Parental choice measures have passed in almost every state. [26]

In six states—Colorado, Florida, Maine, Ohio, Vermont, and Wisconsin—and the District of Columbia, students may use publicly funded scholarships to attend a private school of choice.

Forty-one states and the District of Columbia have enacted charter school laws.

Fifteen states guarantee public school choice within or between districts. (Other states have choice programs that are optional for districts, target only specific populations, and/or require that parents pay tuition.).

Thirty-eight states and the District of Columbia have privately funded scholarship organizations that provide tuition assistance to more than 60,000 students.

In all 50 states, home schooling is legal. As many as 2 million students are home-schooled nationwide.

Twenty-one states have comprehensive dual-enrollment programs that enable high school students to attend college classes for high school and postsecondary credit at minimal or no expense to the student. 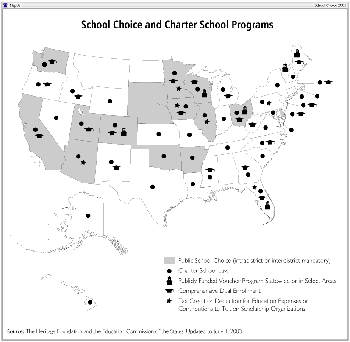 Krista Kafer is Senior Policy Analyst for Education at the Heritage Foundation.

What Is the NSBA, and Why Is It Trying to Shut Down Parents?