An analysis of student test-score data shows that employing a chief diversity officer (CDO) in K–12 school districts does not contribute to closing achievement gaps and is even likely to exacerbate those gaps. If CDOs are not accomplishing their stated goals, what is accomplished by creating these positions? CDOs may be best understood as political activists who articulate and enforce an ideological orthodoxy within school districts. They help to mobilize and strengthen the political influence of one side. The creation of CDOs tilts the political playing field against parent and teacher efforts to remove the radical ideology of critical race theory and other illiberal ideals from school curricula and practices.

CDOs are prevalent in large school districts—employed in nearly 79 percent of districts with 100,000 or more students—and are expanding in rural districts.

While CDOs are ostensibly hired to help close student achievement gaps, evidence shows that CDOs may increase gaps between white and minority students.

Much like their university counterparts, the practical function of K–12 CDOs may be to provide political support and organization to one side of the debate over the contentious issues of race and opportunity. If an increasing number of school districts create positions akin to a CDO, parents and teachers who are now mobilizing against teaching critical race theory, the 1619 Project, and other radical transformations of K–12 education will be stymied.

To track how widespread CDOs are in public K–12 school districts, this Backgrounder examines 554 districts with each at least 15,000 students enrolled as of 2017.REF Those 554 districts enrolled a total of more than 22.5 million students, which was 44 percent of all students in public schools during that year. Determining whether districts employed a CDO was achieved through online searches for the name of the district as well as key terms, such as “diversity, equity, and inclusion,” and by reviewing the staff, departments, and organizational charts listed on these public districts’ websites. 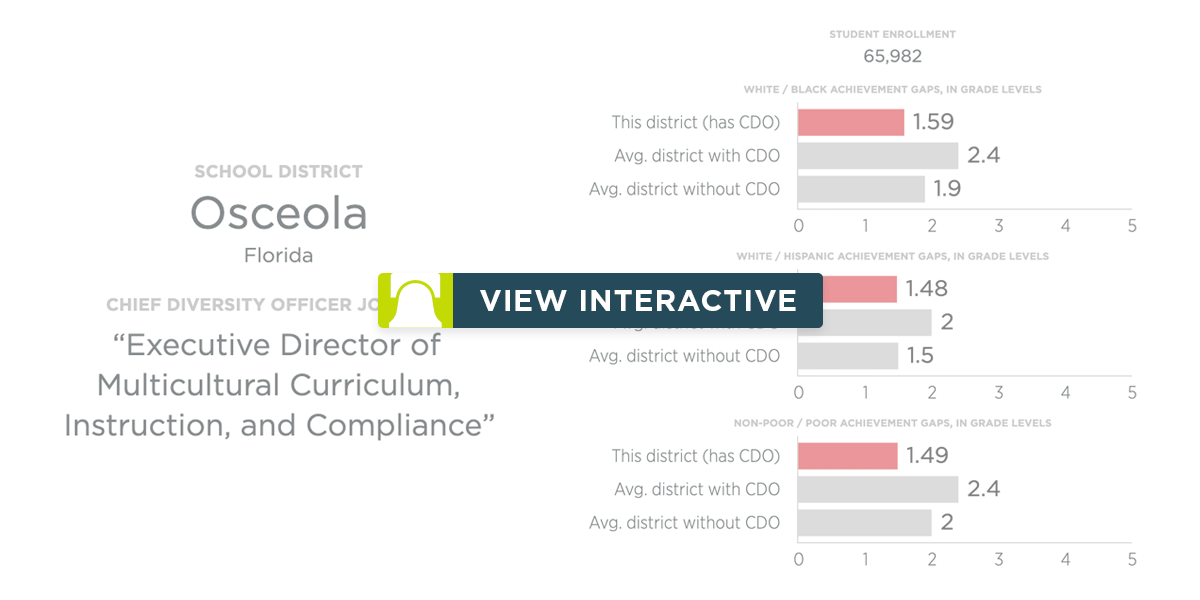 Given the rate at which CDO positions are being created for K–12 districts, it may not be long before the vast majority of all districts have this kind of position. This Backgrounder presents information on the prevalence of CDOs in public schools, the factors associated with whether districts have such a position, and analyses of student standardized testing outcomes to see if a CDO is associated with smaller achievement gaps. The results show that the existence of CDOs may actually exacerbate achievement gaps between white and black students, white and Hispanic students, and wealthier and poor students. These findings are consistent with the observation that CDOs have more to do with political activism than with improving education outcomes—or narrowing achievement gaps between students.

The Frequency of CDOs by District Size

The size of public school districts is strongly associated with whether they have a CDO or not. The largest 28 school districts in the country with more than 100,000 students—collectively enrolling 6.2 million children—are very likely to have CDOs, with 79 percent having such a position. The only very large districts in which a CDO could not be located were the Hawaii Department of Education (which oversees the only district in the state), Duval County Public Schools in Florida, Cypress-Fairbanks Independent School District in Texas, Cobb County School District in Georgia, Shelby County Schools in Tennessee, and Northside Independent School District in Texas.

The Frequency of CDOs by Partisan Dominance of State

Multivariate Analysis of Whether Districts Have CDOs

It is possible that blue states differ from red states in the likelihood of having CDOs because they may have more large districts, different demographic profiles and needs, and different resources to address those needs. A multivariate regression that estimates the independent relationship of each of these factors, and the probability of a district employing a CDO, can help to separate these possible explanations.

Even after controlling statistically for these other factors, the size of a school district and whether it is in a blue or red state remain strongly associated with whether school districts have CDOs. The influence of which political party controls the state actually grows larger when other factors are controlled. Blue states are 17 percentage points more likely than red states to have CDOs, after adjusting for other observable characteristics. This supports the conclusion that CDOs are designed, at least in part, to promote ideological goals.

The influence of school-district size on the likelihood that a school district has a CDO shrinks somewhat when other factors are controlled. Without making any adjustments, a third of districts with between 30,000 and 50,000 students have CDOs. The unadjusted frequency of having CDOs is 59 percent among districts with enrollments between 50,000 and 100,000. Picking the mid-points of these two groupings, an increase from 40,000 to 75,000 students is associated with a 26-percentage-point increase in the likelihood that a district has a CDO. After adjusting for other factors, however, this increase of 35,000 students is associated only with a six-percentage-point increase in expected likelihood of having a CDO.

Districts are more likely to employ a CDO when they have more black students or more students of two or more races, all else equal; but having more Hispanic or Asian students are not statistically significant predictors of whether districts have CDOs. Having more students classified as needing ELL services or qualifying for FRL were also positively related to whether school districts have a CDO. Districts with fewer resources, as measured by having more pupils per teacher, were significantly less likely to have a CDO.

The picture that emerges is that being in a larger district, in a blue state, with more black students, more ELL and FRL students, and more school resources all contribute to the likelihood of school districts employing a CDO. Being in a blue state may make CDOs more common because there is stronger political sympathy for the activities in which CDOs engage. Larger districts with more resources may be in a better position to afford CDOs. More black students, more non-English-speaking students, and more students in poverty may increase the chances of having a CDO because districts may believe that these are the groups that a CDO is meant to assist.

The primary purpose of CDOs—according to most school district websites—is to help to reduce achievement gaps between students from different backgrounds. Differences in standardized test scores between white and black students, white and Hispanic students, and wealthier and poor students have been large and persistent for decades. By creating a CDO position, office, and staff, districts can claim that they will be able to reduce or eliminate these disparities in outcomes. If this claim were accurate, districts with CDOs should have smaller achievement gaps than districts that do not have CDOs, all else being equal.

The Educational Opportunity Project at Stanford University has student test-score data available for virtually every school district in the country.REF By merging the Stanford data with information on whether school districts have CDOs, it is possible to examine whether a district that has a CDO is in fact associated with closing achievement gaps. The analyses presented here suggest that the existence of CDOs in school districts may actually exacerbate achievement gaps. In other words, CDOs may be implementing counterproductive educational interventions.

Perhaps districts create CDO positions because they have larger achievement gaps that they wish to remedy. To address this concern, it is possible to examine the trend in achievement gaps, over time, rather than the static magnitude of those gaps, to see if districts with CDOs are making progress to close those gaps.

Even when other observed characteristics about school districts are controlled statistically, the negative relationship between a CDO position and achievement gaps remains. A regression can make statistical adjustments for differences across districts to gain a better picture of how CDOs affect achievement gaps.

Controlling for these factors provides information on whether CDOs are associated with different outcomes even when districts are of the same size, in the same political environment, have similar racial compositions, have similar student needs, have similar resources to address those needs, and have similar overall levels of student achievement and academic progress. Yet, even when districts are the same on these dimensions, a CDO remains significantly and negatively related to both the level and change in white–black achievement gaps. The white–Hispanic achievement gap and the rate of change in that gap, at least for math test scores, continues to be negatively associated with a district employing a CDO even when all of these other factors are controlled. The relationship between a CDO position and achievement gaps between non-poor and poor students ceases to be statistically significant—meaning that one can no longer be confident that the gaps differ from zero, even when other factors are controlled statistically.

In order to increase transparency of the role of CDOs—and to prevent more CDOs from being hired who champion divisive politics in public schools—three groups can, and should, take action:

An analysis of student test-score data shows that having CDO positions in school districts does not contribute to closing achievement gaps and is more likely to exacerbate those gaps. If CDOs are not accomplishing their stated goals, what is accomplished by creating these positions?

CDOs may be best understood as political activists who articulate and enforce an ideological orthodoxy within school districts. They help to mobilize and strengthen the political influence of small groups of teachers, parents, or students whose preferences may be at odds with the majority of teachers, parents, and students. The creation of CDOs tilts the political playing field against efforts to remove the radical ideology of critical race theory from school curricula and practices.

For instance, parents in a central Indiana district raised concerns about a new DEI officer who was promoting a “woke ideology” that led to intolerance and bullying of those who disagreed with the program.REF In a large Virginia district, the diversity chief described one of his major goals as “making sure that equity is at the forefront of every decision that we have to make.”REF In Oklahoma, a school district hired a full-time DEI director and spent tens of thousands on equity consultants during a school year that featured declining enrollment.REF The chief equity officer in Austin, Texas, has spearheaded conversations about the existence of systemic racism.REF An equity officer in Chicago helped to implement a curriculum equity initiative that would be “fair across race, religion, ethnicity and gender”REF—which would be desirable if fairness were actually the goal.

CDOs do not and cannot promote equality in student outcomes; instead, they create inequities in political power by using taxpayer funds to aid one side in two-sided debates over controversial issues. Opponents of critical race theory and other illiberal ideas need to make the case to their local school boards that CDO positions should not be created or expanded in their districts. State legislatures could also guide districts away from creating these types of positions.

Jay P. Greene, PhD, is Senior Research Fellow in the Center for Education Policy, of the Institute for Family, Community, and Opportunity, at The Heritage Foundation. James D. Paul is Director of Research at the Educational Freedom Institute.

Director of Research at the Educational Freedom Institute