Why Congress Should Modernize Impact Aid for Children of Military Families

Why Congress Should Modernize Impact Aid for Children of Military Families

Will Skillman Fellow in Education

Jonathan is the Will Skillman Fellow in Education at The Heritage Foundation.

Some districts have more federally impacted students and are classified as “heavily impacted” districts.

Impact Aid is a modest part of a large K-12 education budget.

The Impact Aid share of district expenditures may be small, but the opportunities with education savings accounts are huge.

Kathleen Jones and her family were “trying to figure out the next chapter in their lives.”

Her husband spent 28 years in the military, so the Jones family was making adjustments in Arizona for life after military service. Doctors diagnosed both of their boys as being on the autism spectrum, so finding the best services for Samuel and Zachary was going to be important.

The first school they found helped with Zachary’s dyslexia. “They were very accommodating,” Mrs. Jones says. But when they decided to settle in a different county, the new schools “looked good, and looked on paper that it was everything that my boys needed, but it was not,” she says.

The new school provided Samuel with computer equipment to help with his needs, but the teachers did not know how to train him to use the hardware. Meanwhile, the school had no additional resources to help Zachary.

“They would agree to things in theory; but in practice, it was never enough. It never worked,” Mrs. Jones says.

Fortunately for the Jones family, Arizona was the first state in the U.S. to allow students the option to use education savings accounts. With an account, students leave a public school and the state deposits a portion of a child’s funds from the state education formula into a private account that parents can use to buy educational products and services for their children.

Some 3,500 families across Arizona are using the accounts to pay for personal tutors, education therapists, private school tuition, and textbooks, to name a few possible uses. The Joneses could use the boys’ accounts to buy educational applications for tablet computers, for example.

Families in Florida, Tennessee, Mississippi, and North Carolina have access to similar accounts.

This year, Congress is considering a proposal to allow children of active-duty military families across the country the option to use education savings accounts. Washington provides taxpayer funding to military-connected families for education purposes through a federal program called Impact Aid.

School districts receive Impact Aid in addition to other funds from local, state, and federal sources for education purposes. Under the proposal, officials would deposit a portion of a military-connected child’s Impact Aid funding into the child’s account, and families could customize their child’s education according to his or her needs.

Impact Aid is a modest part of a large K-12 education budget. As a result, when a child that generates Impact Aid leaves to use an education savings account, the change to a district’s overall revenues is modest. 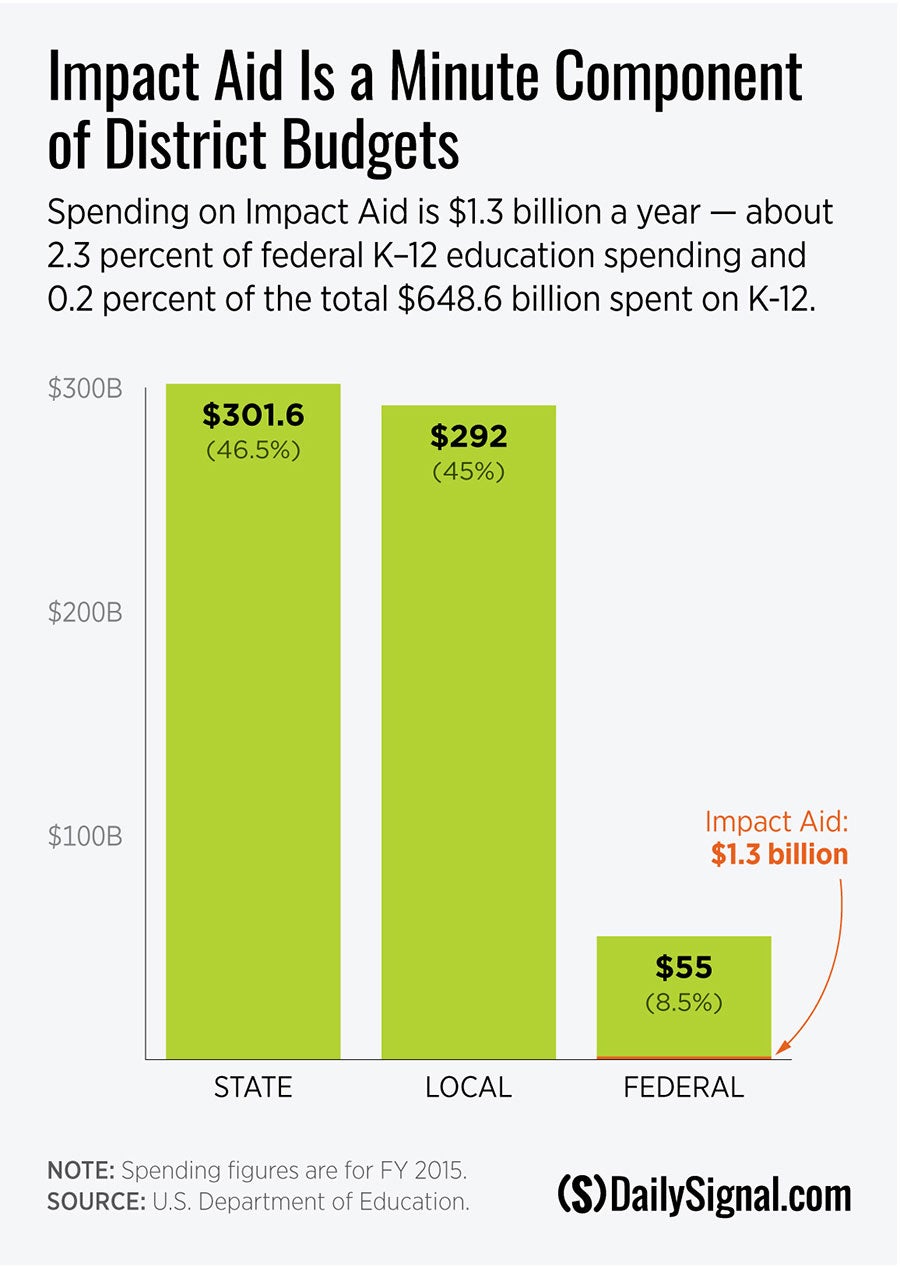 Research from a random sample of districts that receive Impact Aid finds that if 1 percent of the federally connected children in that district chose to use an education savings account, the share of overall district expenditures affected by Impact Aid would be 0.01 percent. (One percent is a reasonable estimate for student participation because in Arizona and Florida, the two states with the longest-running education savings accounts, the participation rates are between 1 percent and 3 percent of the number of eligible students).

If 10 times more military families chose to use these accounts under the federal proposal—10 percent of students in the random sample—the share of overall district expenditures affected by Impact Aid would be 0.10 percent.

Some districts have more federally impacted students and are classified as “heavily impacted” districts. For these districts, the estimates are 0.18 percent and 1.83 percent, respectively.

The Impact Aid share of district expenditures may be small, but the opportunities with education savings accounts are huge.

For the Jones family, the accounts have been life-changing and allow Mrs. Jones to dream big for her boys. “My ultimate goal is to have them be able to live as independently as possible,” she says.

Let Students Study for Final Exams, Not Worry About College Board Politics