Parents know that school safety is a precondition for classroom learning, and a recent EdChoice study confirms that parents place a high priority on school safety.

The schoolhouse is supposed to be a bastion of support, safety, and growth for students, but, all too often, children are trapped in unsafe school environments.

Instead of being trapped in dangerous schools by virtue of their ZIP codes, private school choice helps children learn in environments that are safe.

It goes without saying that parents are more concerned than anyone else for their children’s well-being.

So, no one is surprised, as The Daily Signal has noted, when parents hesitate to send their children to schools where “violence and intimidation were so bad that eight police officers patrolled the school every day, yet kids were still scared of getting jumped.”

All too many parents find their children trapped by their ZIP codes—that is, where they live—and increasingly frustrated that they do not have access to safe and effective schools.

Parents know that school safety is a precondition for classroom learning, and a recent EdChoice study confirms that parents place a high priority on school safety.

In the largest-ever study conducted of participants in a private school choice program (Florida’s tax credit scholarship program), more than 14,700 respondents were asked to list the top three factors that influenced their decision to have their child attend their private school.

Access to a religious environment topped the list (with 66 percent of parents listing that factor), followed by values-based instruction (which 52 percent listed).

Third was school safety. Thirty-six percent of respondents listed school safety in their top three priorities when choosing a school. 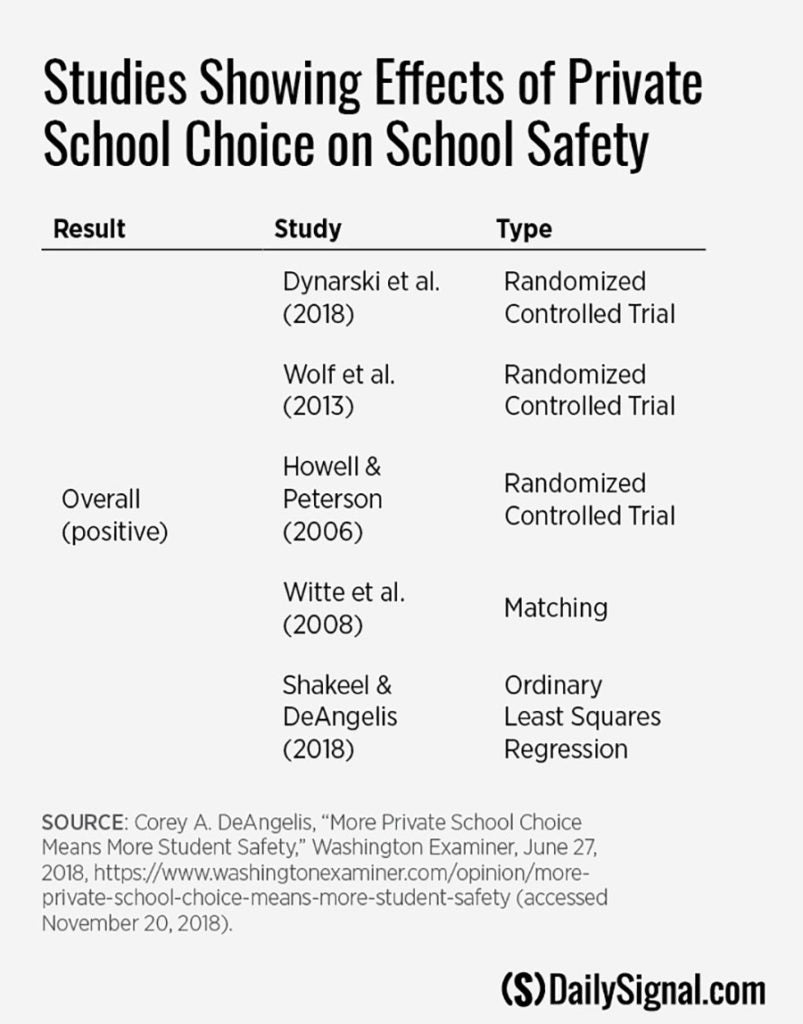 This significant new study builds on existing research that shows how important school safety is to families.

Thomas Stewart and Patrick J. Wolf, for example, described the education priorities of parents whose children participated in the D.C. Opportunity Scholarship Program—a scholarship program in the nation’s capital that enables children from low-income families to attend a private school of choice.

“Safety is parents’ first priority. Once they are confident that their child is in a safe school, parents shift their attention to the academic rigor and curricular offerings of the school,” Stewart and Wolf explained.

The schoolhouse is supposed to be a bastion of support, safety, and growth for students, but, all too often, children are trapped in unsafe school environments.

Private school choice gives children access to safer school environments that were previously out of reach. Participation in the D.C. Opportunity Scholarship Program, for example, increased parents’ and students’ likelihood of feeling they were in a safe school by more than 35 percent.

A study by the Cato Institute’s Corey DeAngelis and M. Danish Shakeel of Harvard University found that private school choice keeps children safer, and that “safety problems are less likely to occur at private schools than government schools,” after controlling for factors such as school size and type, enrollment, student-teacher ratio, percent of minority students and teachers, and “urbanicity.”

Moreover, DeAngelis and Shakeel found that students attending private schools are less affected by bullying, violence, and theft than at public schools.

Students who participated in the Milwaukee voucher program for four years were half as likely to commit felonies or misdemeanors after graduation. Similar results occurred when school choice options, such as charter schools, became available to students in Harlem in New York City.

In light of these results, DeAngelis explained, “It shouldn’t be ridiculous to think that private-school choice would lead to [greater school safety] … because of the competitive pressures to do a better job with student bullying and student safety.”

Describing the unique role private schools can play in school safety, DeAngelis noted, “Private schools must cater to the needs of their customers; that is, parents and their children, and they have competitive pressures to do so.

“Parents value the safety of their children more than anybody else, so parents aren’t going to send their kids to schools that are not very safe. On the other hand, public schools remain open whether they are safe or not.”

Five empirical studies now bear that out, demonstrating how private school choice offers children not only access to a better education and a better life, but to learning environments that are safe.

Instead of being trapped in dangerous schools by virtue of their ZIP codes, private school choice helps children learn in environments that are safe and clearly accountable to parents.

It’s one of the first—and most important—school qualities parents look for, and education choice is enabling families from all walks of life access to this most critical feature.

Biden Administration to Force Schools to Adopt Radical Gender Policies. Here’s What You Need to Know.