Skyrocketing Debt Too Important to Be Paired With Spending Deal

Skyrocketing Debt Too Important to Be Paired With Spending Deal

For lawmakers, pairing an unpopular action, like raising the debt limit, with massive spending increases sweetens the deal.

Congress should debate the debt limit and new spending thoroughly and separately.

Lawmakers must be willing to confront tough issues like the debt limit head-on.

Two major issues that Congress will be forced to confront in the coming weeks and months are the debt limit and the future of the Budget Control Act discretionary spending caps.

A report from The Hill indicates that negotiations are underway between Congress and the Trump administration to combine a two-year budget caps deal with an increase or suspension of the debt limit.

Taxpayers have seen this failed approach before. For lawmakers, pairing an unpopular action, like raising the debt limit, with massive spending increases sweetens the deal.

The total national debt is more than $22 trillion. An unpaid for budget deal could add at least another $2 trillion. Congress should debate the debt limit and new spending thoroughly and separately. Importantly, lawmakers must not make the fiscal situation any worse.

As of May 17, the debt subject to the limit was $21.9 trillion and just $25 million short of eclipsing the limit. In total, the Treasury estimates that the national debt has increased by more half a billion dollars since Oct. 1. 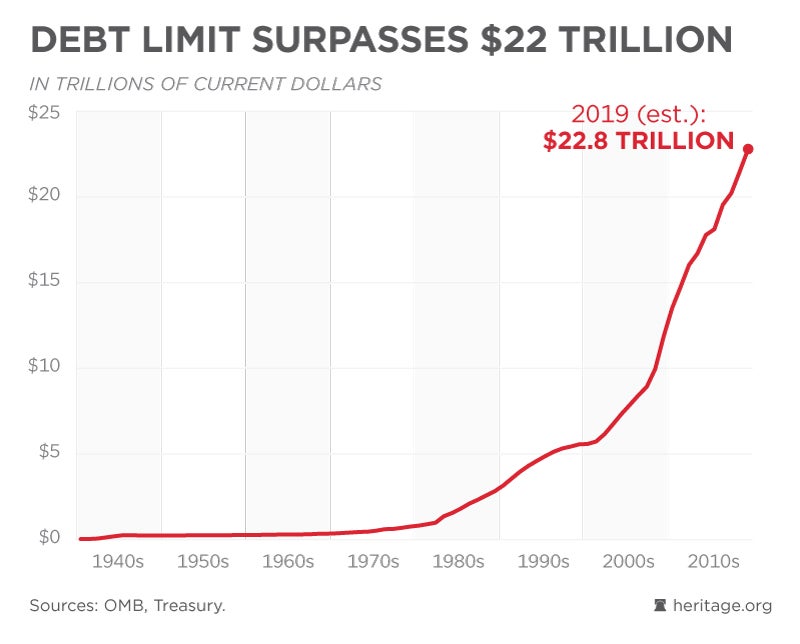 For the time being there is no immediate risk that the federal government will have to stop making payments or providing services. The Treasury is permitted to take “extraordinary measures” to continue meeting existing federal obligations so long as no new debt is issued. An influx of April tax receipts also offered temporary relief.

However, extraordinary measures will last only so long. The Congressional Budget Office estimates by fall the federal government will no longer be able to cover its obligations.

Due to Congress’ dysfunctional budget process, fiscal year 2020 appropriations and the status of the Budget Control Act spending caps could also come to a head at the same time.

The Budget Control Act established discretionary spending caps from 2012-2021, but three separate amendments have raised the caps in two-year increments. House Democrats have already put forth a plan that would raise the caps by at least $357 billion over the next two years—without any plan to pay for it.

The issue at hand with the Budget Control Act is that the last mega spending deal created a cliff heading into 2020. Under current law, for spending to remain at the inflated levels would mean a $125 billion increase next year. Without changes to the law, national defense spending would absorb 57% of the cut.

The debt limit and status of the Budget Control Act are two critical issues that will have a sweeping impact on the economy. High levels of debt create a drag on the economy, hurting job creators and the average worker alike.

Thankfully, The Heritage Foundation has a plan that provides long-term solutions for the spending-driven debt crisis and shifts the role of the federal government back to constitutional priorities, such as national defense.

On Monday, “Blueprint for Balance: A Federal Budget for Fiscal Year 2020“ was released. The comprehensive budget proposal reduces debt as a share of gross domestic product from its current level of 78% to less than 61%. In total, the plan would save taxpayers nearly $11 trillion over the next decade.

“Blueprint for Balance” would maintain the aggregate Budget Control Act caps for 2020-2021 by giving Congress the flexibility to prioritize defense spending without driving the country further into debt.

In 2020 alone, the plan calls for nearly $128 billion in discretionary budget cuts. Combined with other reforms, such as eliminating unauthorized appropriations, there is more than enough funding available to provide for a robust national defense within the overall cap.

Ultimately Congress will determine if there is another two-year caps deal or not. If lawmakers decide to amend the Budget Control Act, they must ensure that discretionary spending increases are fully offset by mandatory spending reforms.

“Blueprint for Balance” lays out comprehensive reforms for entitlement and other mandatory programs that would reduce spending by more than $7.3 trillion over 10 years.

These same recommendations could be used to address the debt limit. First, lawmakers should set a numerical limit. They should then utilize the budget process to enact reconciliation legislation that reduces spending by more than the debt limit increase to help curb the tide of red ink in the future.

Reaching the debt limit forces Congress and the president to confront the impact of unsustainable spending. It should be a wake-up call for lawmakers and a chance to change course before the situation gets worse. Combining the debt limit with the Budget Control Act debate deemphasizes the seriousness of both issues.

Lawmakers must be willing to confront tough issues like the debt limit head-on. America’s economic future depends on their strong leadership.

The Weird, the Woke, the Wasteful: 10 Flavors of Pork for 10 States Bringing Home the Bacon