Rob Bluey is vice president for communications and the executive editor for The Daily Signal.

Vice President Pence was at Heritage to talk up the U.S.-Mexico-Canada Agreement.

He pitched the importance of free trade and USMCA, while also addressing the ongoing concerns with Iran and defending Kavanaugh.

Pence’s approach serves as a model for other conservatives.

The vice president had escaped to Florida earlier this year with wife Karen for “a couple of days on the beach,” according to Pence, when two fellow beachgoers spotted him.

“We were sitting there in our ball caps and our sunglasses taking in a few enjoyable hours of rest there on the beach, and these two fellas came walking by wearing big Budweiser T-shirts,” Pence told a standing-room-only crowd at The Heritage Foundation.

Pence was at Heritage to talk up the U.S.-Mexico-Canada Agreement, but before even mentioning the trade deal he had made news regarding the attack on Saudi Arabia’s oil facility and hit back against The New York Times’ smear of Supreme Court Justice Brett Kavanaugh. Pence was just getting warmed up for a busy day in the life of the vice president.

So how exactly would these two fellas on the beach fit into the narrative?

“One of them stopped and turned to me and he said, ‘Hey, you’re Vice President Mike Pence.’ And I said, ‘Yes, I am.’”

At this point, Pence had the audience chuckling and wondering what he might say next. It turns out these two fellas, like so many other Americans, are beneficiaries of the Trump administration’s economic policies.

“He looked at me and he said, ‘Well, listen, you got to tell the president that he’s got to keep doing what he’s doing, because I made twice as much money last year as I did the year before.’ And I told him I’d tell the president word for word. And I did it. It’s true.”

Now for the punchline.

“Then he took three steps away, and he turned back and looked at me, and he said, ‘Now, I don’t know what you do, but keep doing what you’re doing, too.’

John Adams, our nation’s first vice president, once called the job “the most insignificant Office that ever the Invention of Man contrived or his imagination conceived.”

There’s nothing insignificant about how Pence approaches his role, though.

Just as he told those beachgoers he would keep doing what he’s doing, Tuesday was a typically active day for Pence—a microcosm of his role in the Trump administration. 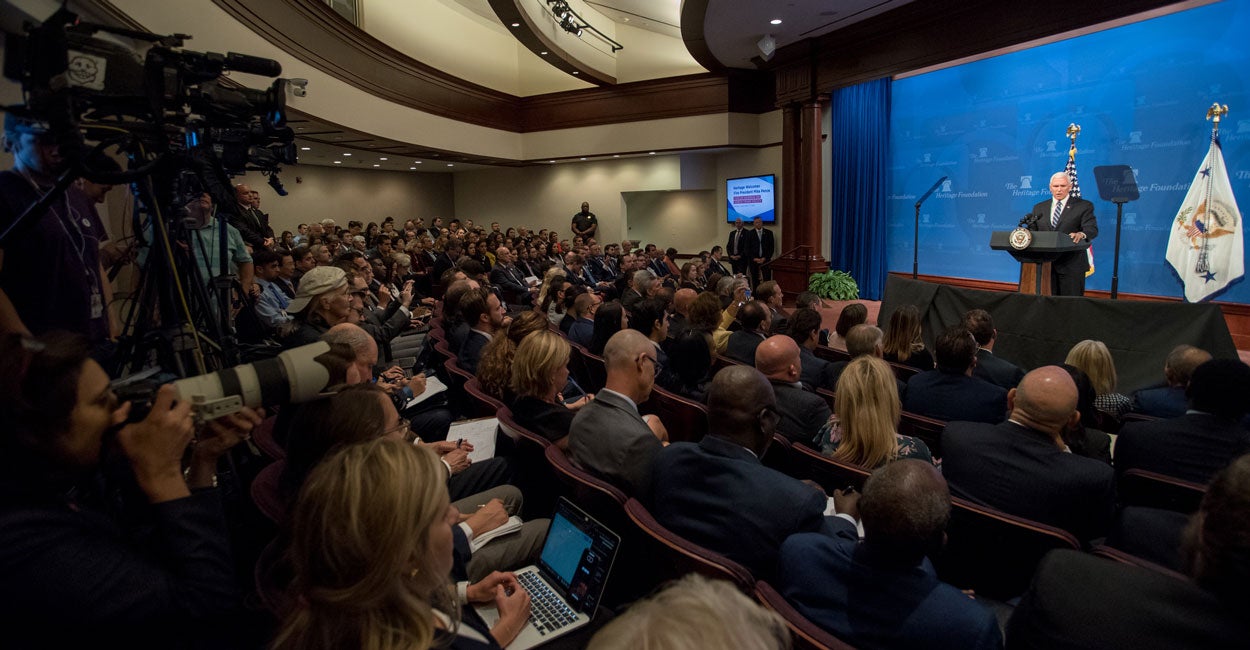 In his Constitution Day speech at Heritage, he pitched the importance of free trade and USMCA, while also addressing the ongoing concerns with Iran and defending Kavanaugh. The speech generated significant media attention across the globe. But that wasn’t its sole purpose.

Pence has made several important stops at conservative organizations in recent months, as the Washington Examiner’s Paul Bedard documented. In effect, he’s become the Trump administration’s top liaison to the conservative movement.

“Since his time in Congress, Vice President Pence has been a trusted friend of conservatives,” Tommy Binion, Heritage’s vice president of government relations, told the Examiner. “His latest efforts aren’t new, but a continuation of a lifetime of work together in the trenches of politics and public policy. Pence’s actions as vice president to protect life, rebuild the military, and preserve our founding values speak louder than any politician’s words.”

Although most politicians pay homage, it’s authentic with Pence. He’s known and had relationships with conservative leaders for decades.

Pence reminded the audience that one of his first stops after Trump’s 2016 election was Heritage’s biggest annual event in Washington, D.C. At the time, Pence was helping Trump during the critical transition period before the inauguration. The incoming administration was filling jobs and mapping out a policy agenda.

“The truth is, I’ll never forget … election night,” Pence recalled. “It was about 4:30 in the morning. And as we were leaving the hotel, I’ll never forget the president-elect looked at me and he said, ‘I’ll tell you what—it’s been a long night. Let’s not get started until 8:30 tomorrow morning.’ And when I got to the office, he was already at his desk.”

Pence continued, “We went right to work, taking the policies that the president-elect had campaigned on—the policies that The Heritage Foundation had advanced for decades—and worked to build a team to put them into practice.”

That work continues—and was on display after his morning visit to Heritage.

Following his speech at Heritage’s Capitol Hill headquarters, Pence headed across the street to brief Senate Republicans on the Saudi attack. Then it was back to the White House for a naturalization ceremony for 28 new American citizens. Pence also made a surprise stop at Hillsdale’s Kirby Center to congratulate the college on its new master’s program in Washington. And if that wasn’t enough to fit into one day, Pence traveled to Camp David in Maryland for a workforce development dinner organized by Ivanka Trump with CEOs, government leaders, and educators.

With so many policy debates brewing in Washington and big promises to keep for the American people, Pence is putting to use the communications skills he developed as a conservative radio and TV host and refined in Congress. As the former president of a state-based think tank and lifelong conservative, he’s also making sure movement leaders are the focus of his attention.

Perhaps most importantly, Pence’s approach serves as a model for other conservatives. His ability to mix serious policy ideas with compelling stories is an effective way to make the case that conservative solutions are leading to a better life for all Americans.

The Challenge for Conservatives in a Post-Trump World