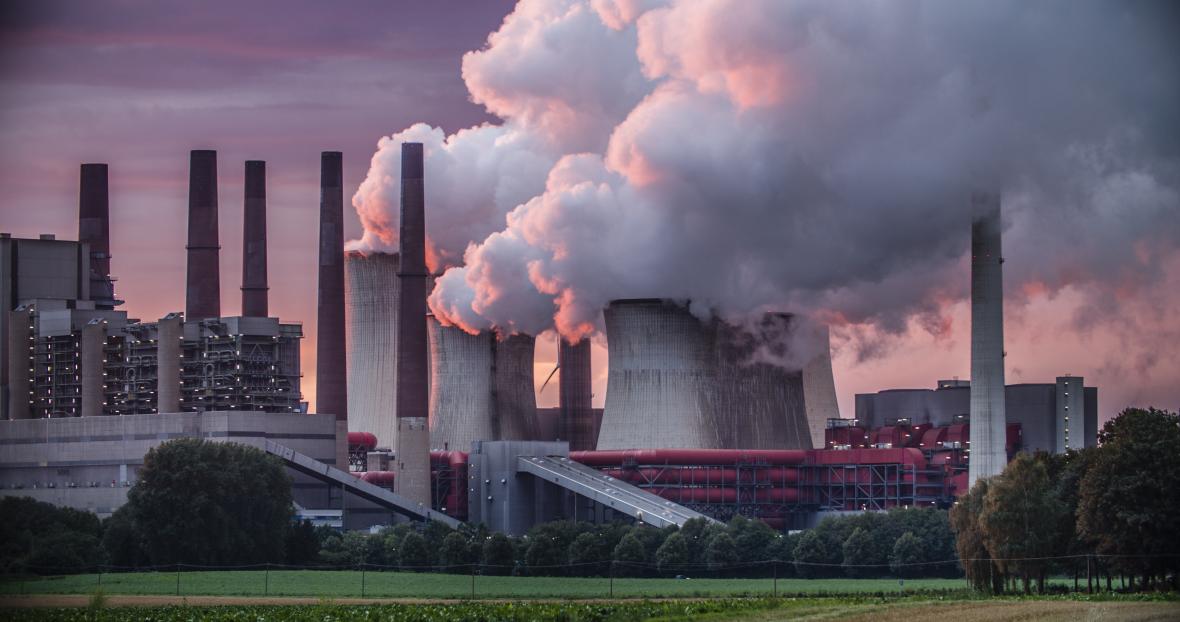 TIM DOESCHER: Climate change is the cause celebre of the left and it's not going away. Even though it consistently ranks as one of the bottom issues Amercican's are most concerned about. Countless of dollars are raised through donations and tax dollars to combat the fear of mad made climate change. Regardless of polling, celebrities continue to host rallies, make movies, and put on concerts asking for government to take action.

In response to this outcry, President Obama announced the Clean Power Plan in 2015. In an effort to curb man made climate change, the plan would intentionally favor energy sources like wind and solar over traditional fossil fuels like coal and natural gas.

Human activities are changing the climate in dangerous ways. And today after working with states and cities and power companies, the EPA is setting the first ever nationwide standards to end the limitless dumping of carbon pollution from power plants. - President Barack Obama

DOESCHER: But as this plan was being implemented, many grew concerns about its impact on jobs and economic growth. President Trump campaigned against energy mandates like the Clean Power Plan and quickly moved to reverse them once inaugurated.

DOESCHER: Last week the EPA released a new rule to replace the Clean Power Plan called The Affordable Clean Energy Rule. This would give control back to the states, and in enable them to make decisions reflecting their individual needs and allowing the freedom to choose sources of energy that don't dramatically raise the prices of our energy bills. To take closer look and better understand some of the more confusing aspects of this back and forth between Trump and Obama policies, we talked with LORIS, The Heritage Foundation's Herbert and Joyce Morgan Fellow in energy and environmental policy.

DOESCHER: Nick, thank you so much for being here today.

NICK LORIS: Thanks for having me.

DOESCHER: So just give us a quick summary of Obama's Clean Power Plan, where were we headed when it was started, and what was the plan if fully implemented.

LORIS: Sure. The Clean Power Plan was really the crown jewel of the Obama administration's climate legacy that would have required that states reduce their CO2 emissions on a state specific basis, depending on their energy mix. And it really would have hurt our existing coal fire power fleet to force them to prematurely retire. And so it was really an attack on our existing coal generation, which at the time provided about 33% of our electricity. It's a little less now, because of cheaper natural gas. But that in turn would have mostly impacted American families and businesses as a result of the higher energy bills that would have been brought upon this regulation. And so those costs ripple throughout the economy. It's not just when you pay your electricity bill, it's when you go the grocery store because everything is that we do and make requires electricity.

DOESCHER: Nick, the primary target of the Clean Power Plan was what? Who would hurt the most and do you have a sense for the cost to American?

LORIS: Yeah, we estimated that it would have forced electricity expenditures to increase about 20% over the next decade and a half. Which again, has huge ripple effects throughout the economy. It's not just your electricity bill, but all these families and businesses are either absorbing those costs, so that means they can't invest in new technology or hire new works, or they're passing those costs on to consumers so people are purchasing less of those goods and services. And that again, acts as an economic vice that squeezes both the production side of the economy and the consumption side of the economy. And you're talking about hundreds of thousands of jobs lost. We estimated a $2.5 trillion hit to Gross Domestic Product over the next 20 years. So a significant economic hit.

LORIS: And the important part of this too is for negligible climate benefits. This whole regulation was to reduce global temperatures. And so even if this plan was implemented perfectly, which it likely would not have been, climatologists using a climate model developed with funding from the EPA estimated that you would avert global temperatures by a maybe a few hundredths of a degree Celsius warming by the year 2100.

DOESCHER: Lets move to the Affordable Clean Energy Rule, or ACE. Which was recently proposed by the Trump EPA. In your recent article, you said that this plan is the "Ace up the EPA's sleeve." Give us a sense for what it entails, and how it differs from the Clean Power Plan.

LORIS: One of the major differences between the Clean Power Plan and the Affordable Clean Energy Rule, or ACE, is that the Clean Power Plan would have empowered states to effectively re-engineer their energy economy by abiding by the regulation to build more wind or increase solar generation rather than actually regulating the point source of emission. It grossly exceeded the statutory authority of the EPA. It was constitutionally objectionable, which is why the Supreme Court stayed the regulation because more than two dozen states challenged the Clean Power Plan and it looked like they were going to win, which is pretty unheard of, where a Supreme Court actually sides with industry on something like this.

LORIS: On the flip side, ACE actually looks at reducing CO2 emissions from the point source of emissions, which are the existing power plants that we have today. And they actually in this regulation use a deregulatory effort to help existing power plants improve their efficiencies to more easily meet these requirements. And they allow states, and they give states three years to decide which power plants they want to upgrade, and what that ultimately will look like. So it's really empowering states to look at what this regulation will be, rather than attempting to use this regulatory onslaught to reduce coal as an electricity generating source and replace it with what were politically preferred sources under the Obama administration of wind and solar.

DOESCHER: Why isn't this a scrap it and forget all about it? Why are we trying to replace this?

DOESCHER: Opponents of ACE started calling this the dirty power plan and have gone to great lengths to try and prove that ACE will harm the environment as well as our families. Obviously these are scare tactics, so let's bring it back into perspective. What do these changes mean for the environment, for our health, and productivity?

LORIS: Well first of all, its still a regulation so there's no where to go but reducing emissions here. And second of all we're not backsliding here. This isn't giving coal or any other energy source a license to pollute. It's simply saying that hey, Obama's Clean Power Plan was this attempt to re-engineer the energy economy. We're going to do much more of a minimalist efficient regulation that actually gets to reducing the emissions that you want to emit. Now I would argue that we shouldn't have this regulation at all because it is meaningless from a climate standpoint and we have regulations in place to reduce those other pollutants like black carbon that have direct impacts on human health and the environment. And let's focus on those, that will improve air quality rather than something as meaningless as the Clean Power Plan or even in a sense, the ACE Rule.

DOESCHER: Nick, many on the left are saying that this rule is just gonna be overturned by the courts, and that it won't stand up to scrutiny. Now I know you're not a lawyer, but do you think that there's any merit to this? Is this just an exercise in futility?

LORIS: It's really hard to tell, honestly. Because it all gets back to this endangerment finding and whether or not the ACE Rule, if ever finalized, meets that standard under the endangerment finding that they're doing enough to reduce CO2 to combat global warming. They set the same emissions targets at the Clean Power Plan did. So if it's all based on emission targets then it potentially has a good chance of standing up in court. And because we have some precedence where the federal governments in the courts give deference to the agencies in setting these standards. There's a good chance that it survives the courts. But because this endangerment finding is relatively new and the way that the EPA is going about this is somewhat new, it's kind of uncharted territory.

DOESCHER: In many conservative circles the EPA is an untrustworthy acronym because of many regulations and dictates. It's made business a lot more difficult to conduct and it's stood in the way of a lot of potential progress. So let's focus on some of the good that's happening right now. Since Trump took office a lot has been changing within the EPA. What is the administration doing right now in addition to the Clean Power Plan, what are you seeing and what you cheering?

LORIS: Rolling back the Clean Power Plan is a huge part of it. Freezing the Corporate Average Fuel Economy-

DOESCHER: Those are the CAFE Standards.

LORIS: CAFE Standards. Otherwise known as just mandating that your cars be more fuel efficient and taking choices away from consumers by making them less safe and lighter. Rolling those back, because that was essentially a gift toward companies that make electric vehicles like Tesla more than anything else because that's an easy way for car companies to comply with this regulation. Rolling that back was important. Rolling back the New Source Performance Standards for new power plants is something that isn't talked about very much but in terms of potentially helping coal that's a huge one.

DOESCHER: So explain that to me.

LORIS: So the New Source Performance Standards was another climate change regulation that set a CO2 per megawatt hour threshold so low that it effectively would ban the construction of new coal fire power plants. And so this was for anyone who wants to build a new coal fire power plant, and this is what President Obama said when he was candidate Obama, he said, "If anyone wants to do this, they can, but they're gonna go broke for everything they're gonna have to do to comply with the regulation." And he made good on that with his regulatory promise. And rolling that back will give coal a fighting chance to compete with cheap natural gaz. And those three and just simply instituting a culture that we need to rely on the states more because a lot of our national priorities have been cleaned up and a lot of our environmental challenges lie at the state level so let's have more faith in what the state can do because they're closer to the situation and closest to the problem, so it's not just been a regulatory roll back from an economic standpoint but it's also championing better environmental policies in making sure that we're not just focused on processes, but we're actually focused on environmental outcomes that achieve meaningful environmental benefits. And that's something the EPA got away from for a long time, even dating back past the Obama administration.

DOESCHER: Nick, thank you so much for looking after this, and keeping track of it.

LORIS: You bet. Thanks for having me.

What Do Collapsing Oil Prices Mean for America?