Ted Bromund studies Anglo-American relations, U.S. relations with Europe and the EU, and the U.S.’s leadership role in the world.

The U.S. isn’t missing much in Switzerland. Even the treaty’s friends admit it’s a failure.

The treaty supposedly is intended to impose common standards for the international sale of arms. But in fact, its advocates simply dislike arms sales, period.

The Trump administration deserves credit for taking the courageous course of actually rejecting a bad treaty.

The nations that are party to the Arms Trade Treaty gathered for their annual meeting this week in Geneva. The United States is not there, as President Donald Trump wisely withdrew from the treaty last month.

The U.S. isn’t missing much in Switzerland. Even the treaty’s friends admit it’s a failure.

The nominal purpose of the Geneva meeting, held Monday through Friday, was to review how the Arms Trade Treaty is working. The United Nations General Assembly adopted the treaty in 2013 and the Obama administration foolishly signed it in 2014.

The treaty supposedly is intended to impose common standards for the international sale of arms. But in fact, its advocates simply dislike arms sales, period.

Amnesty International complains that “even though the Arms Trade Treaty has been in place for nearly five years, global arms trading is still on the rise.”

The treaty’s common standards were not supposed to reduce the volume of arms sold. It was supposed to be a standard-setting treaty, not an arms control treaty. But that is now the measuring stick that supporters apply to it.

So by their own standard, the Arms Trade Treaty has been a complete failure.

The treaty’s supporters don’t just dislike international arms sales. They also dislike the civilian possession of firearms. Amnesty International openly regrets that there are over 1 billion firearms in the world, the “vast majority of which are in civilian hands.”

The treaty wasn’t supposed to have any relevance to the lawful civilian possession of firearms, but that doesn’t stop its friends from complaining that the treaty hasn’t managed to disarm civilians. The treaty never actually was going to be able to do this, but the desires of its supporters are clear.

What really marks the treaty out as a failure, however, is the fact that the nations that nominally support it refuse to submit the reports it requires.

In Geneva, the latest statistics show that only 60% of the treaty’s member nations have submitted their reports for 2018. And of the 55 national reports submitted, nine were kept private, making them all but useless.

Reporting is supposedly absolutely crucial to the functioning of the Arms Trade Treaty. If nations don’t report, no one has any idea at all if they actually are implementing the treaty. Admittedly, even if nations do report, they can simply tell lies. But reporting is nonetheless mandatory under the treaty.

And yet, almost half the nations that are party to the treaty cannot be bothered to even pretend to do it. 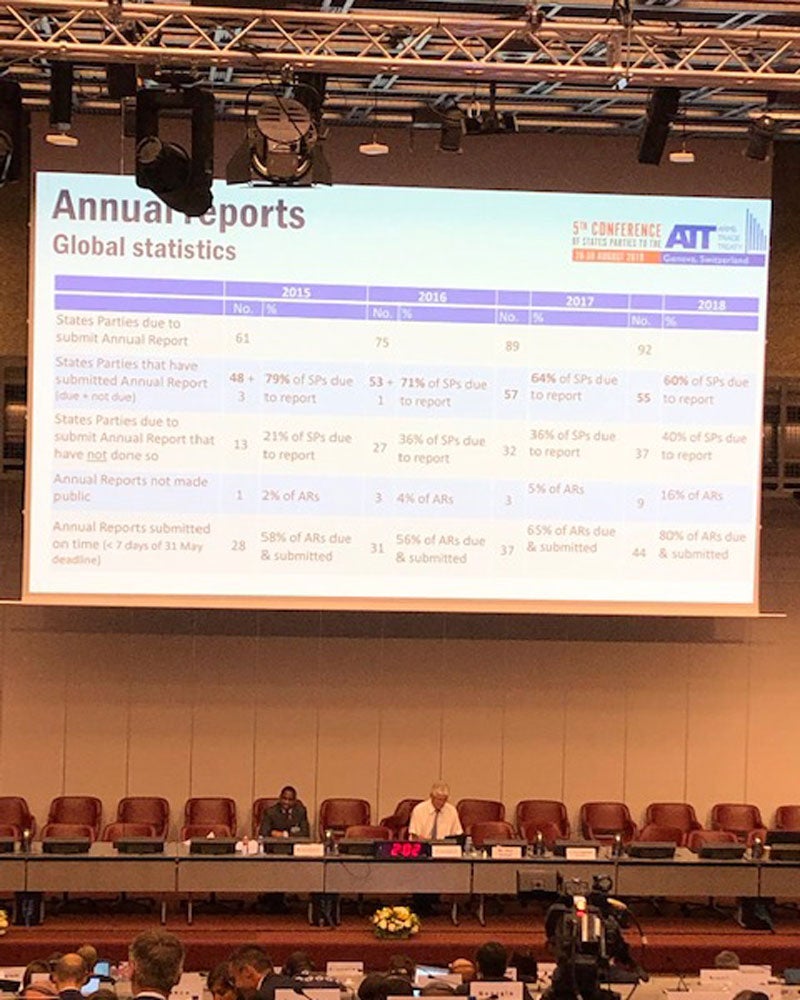 Delegates of nations that are party to the Arms Trade Treaty review the steady decline in the percentage of nations submitting annual reports during a session Wednesday in Geneva. (Photo: James M. Baranowski/NRA Institute for Legislative Action)

The United States never should have signed the treaty. It is completely unserious, it has achieved nothing, it will achieve nothing. It is intended only to constrain the Western democracies, and it is backed by people who have no patience with the idea that civilians have any right to own firearms.

That is why Trump was completely right to remove the signature of the U.S. from the treaty, which he did with this letter to the United Nations on July 18. The treaty now has no legal force in the U.S.

This is not the end of the U.N.’s small arms folly. Other U.N. programs are just as foolish as the Arms Trade Treaty, and the U.S. should quit them immediately.

But the president took a big step by “unsigning” the treaty. The U.S. rarely refuses outright to ratify bad treaties. Usually, it just ignores them and lets them rot on the shelf.

The Trump administration deserves credit for taking the courageous course of actually rejecting a bad treaty.

Those tensions cannot be resolved by a treaty. If the way to peace was that simple, there would be no wars.

It would be nice if the advocates of the Arms Trade Treaty, who now openly admit that their favorite treaty has completely failed by their own standards, would think honestly about why what they wanted has not worked.

They are not likely to do this, because the demand for treaties like the Arms Trade Treaty is deeply rooted in the progressive belief that the West in general, and the U.S. in particular, is the source of the world’s evils.

That is also untrue. But admitting that would strike a serious blow at progressivism.

So instead, we can expect that the treaty’s friends will blame the U.S. for the treaty’s failure. But they will not be able to explain how it was that a treaty they lauded to the skies turned out to be such a dud.

Britain’s Foolish Advocacy Of The Arms Trade Treaty Bites Back