James M. Roberts' primary responsibility was to edit the Rule of Law and Monetary Freedom sections of Index of Economic Freedom.
Copied

The latest dead end on that highway to hell—already littered with the human victims of past failed attempts in places like Cuba and the old Soviet Union—is in Caracas, Venezuela.

That is where, last weekend, President Nicolás Maduro and the thousands of Cuban communists who actually run his government took the final step to squash the rights of individual Venezuelan citizens and impose an authoritarian dictatorship.

Hayek could have told us: It is the logical last act in the Venezuelan tragedy that began nearly 20 years ago with the election of Maduro’s mentor (and Fidel Castro’s protégé), Hugo Chavez.

As The Economist magazine reported earlier this year, the damage in Venezuela is extensive.

The economy has contracted dramatically—gross domestic product in 2017 will be nearly 25 percent smaller than when Chavez died in 2013. Hyperinflation—and the complete economic collapse it signals—seems to be just around the corner.

Inflation is predicted to exceed 1,600 percent this year and the value of the country’s currency—the bolivar—has plummeted. As wags on Twitter have noted, it is now worth less than the virtual gold tokens in the “World of Warcraft” video game.

Which would be funny, were it not for the immense human suffering right now in Venezuela. People are losing weight because there is not enough to eat in this workers’ paradise.

There are shortages of everything, everywhere. Just like in the old Soviet Union, people line up at the first rumor that some basic item—bread, rice, cooking oil, etc.—might be available.

Food riots are frequent. Medicines are almost non-existent. Hospitals do not even have running water. Many people are fleeing—thousands of refugees are crossing the border daily into Colombia. 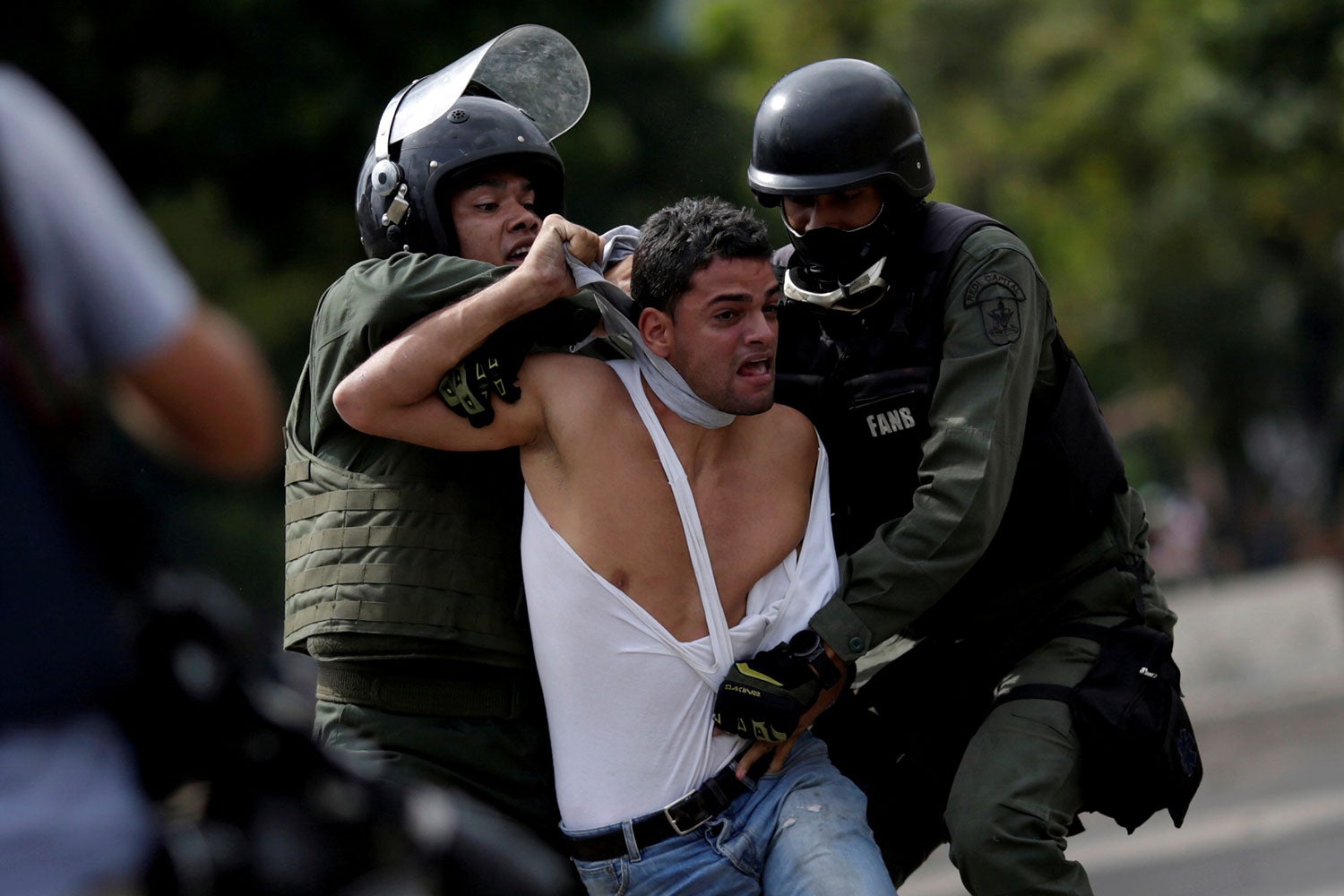 Police detain a demonstrator in Caracas, Venezuela at a rally protesting the government of President Nicolas Maduro. (Photo: Ueslei Marcelino/Reuters/Newscom)

It wasn’t supposed to end this way. The World Bank clucked approvingly in the early Chavez years, when his oil income redistribution schemes improved statistics for inequality.

Meanwhile, the Chavistas looted and destroyed the Venezuelan private sector, seizing and wiping out the efficient companies and farms that had been producing the basic goods people are now fighting over.

As long as oil prices were rising, they got away with it.

There is more equality in Venezuela today, that’s for sure. As British Prime Minister Winston Churchill would have put it: Socialism produces misery, equally shared.

Not everyone is hurting, though. Chavez’s daughter, María Gabriela, has a fortune estimated at more than $4 billion.

The Miami Herald reports that state-owned oil company PDVSA alone funneled $11 billion in illegal payments to Venezuelan government officials and their friends and families between 2005 and 2014.

Venezuela’s score in the Transparency International Corruption Perception Index makes it the most corrupt country in the Western Hemisphere, and helped drag the country to the bottom of The Heritage Foundation’s annual Index of Economic Freedom, too.

Back home in America, the mainstream media is dutifully reporting on the demonstrations against the government.

Sometimes they mention that Maduro’s thugs on motorcycles are randomly beating people up and that Venezuelan government sharpshooters are targeting and killing protesters to terrorize the public and scare them into staying off the streets.

But, in a country where many young people are still enchanted by the Bernie Sanders message of socialism and free stuff, not enough attention has been paid to this simple fact: that in the real world—a world where bad people say good-sounding things to voters and then proceed to steal other people’s stuff once they take office—Venezuela is what you get when socialist theories are actually put into practice.

With Its New President, Chile Could Take a (Left) Turn for Worse