At the Federal Trough: Farm Subsidies for the Rich and Famous

At the Federal Trough: Farm Subsidies for the Rich and Famous

When Congress adopted the fiscal year 2002 budget resolution on May 10, it included an additional $73 billion for agricultural spending on top of the $95 billion base approved over the next 10 years, including an historic 65 percent increase in farm subsidies. Many policymakers believed these increases would be affordable in the era of huge budget surpluses. By September, however, estimates of the five-year budget surplus had dropped by almost 50 percent to just over $1 trillion.1 In the wake of the September 11 terrorist attacks, the next estimate is sure to be much less. But rather than reassess America's national, economic, and budgetary priorities at this difficult time, Members of Congress have initiated a feeding frenzy at the federal trough. They are rushing to pass a farm bill that will lock in favored subsidy programs--primarily benefiting wealthy farmers--before the surplus is gone.

The money is in the budget now. If we do not use the money--it is very likely not going to be available next year. When we write the next budget resolution, we are going to be facing a totally different circumstance than we faced in the spring of this year when we wrote the budget.2

He is right. Those most intent on passing farm legislation this year, even though current authorization will not expire until next fall, recognize that Americans will not support irresponsible increases in farm subsidies next year when there may be little money to fund them. They renamed the Agriculture Act of 20013 (which had less chance of passing before September 11) the Farm Security Act of 2001, implying that it was now a component of the national strategy to eradicate terrorism. The strategy worked. The House passed it by a vote of 291 to 120 on October 5.

Those who want to rush the Farm Security Act to the President portray subsidies as a safety net for impoverished farmers. The sad truth is that far too many of these dollars never reach the farmers with the lowest incomes. Instead, much of the money goes to millionaire farm owners, Fortune 500 companies, and even some legislators who serve on Congress's agricultural committees. While 60 percent of America's farmers are not even allowed to apply for a subsidy, billionaire Ted Turner, for example, has received subsidies over the past five years that are 38 times greater than the median farm subsidy over that period.4

Rather than rush to pass a bill that concentrates more subsidies in the pockets of the wealthy and well-connected, Congress should study ways to assure that farm subsidies reach those who need them. At a time of dwindling surpluses, pressing national security priorities, and an agriculture sector that is faring well, taxing working people to swell the coffers of millionaires is irresponsible.

For two-thirds of a century, the favored rationale for farm subsidy programs has been America's romantic connection to its agricultural past and a desire to preserve the small family farm. But in reality, agriculture policy has become an exercise in "trickle-up" economics--taxing working Americans to subsidize the wealthiest farms. Before Congress rushes headlong into increasing farm subsidies by 65 percent, it should examine who really needs them.

The outlook for most American farms today is far from bleak:

How the Subsidies Discriminate

The other 60 percent of farmers produce products for which there is no government program, like eggs, poultry, cattle, nuts, and most vegetables. The federal government, in an attempt to increase farmer incomes, arbitrarily subsidizes wealthy farmers simply for planting favored crops while excluding many low-income farmers who do not grow the right crops. 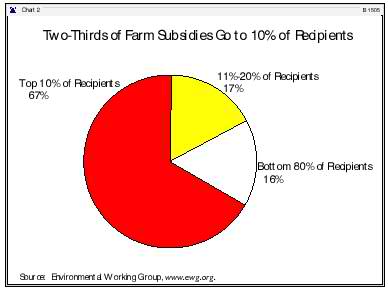 Because government payment levels are based on production volume rather than need, the overwhelming percentage of payments goes to large farms that have considerably more net worth and, due to economies of scale, are much more profitable than small farms.

Although farm subsidies are supposedly designed to help farmers, much of the benefits actually accrue to their landowners, in the short run through rising rental rates and in the longer term through capitalization into land values. The 42 percent of farmers working mostly rented acres in 1999 received little benefit from the programs.11

Examples of the Rich and Famous Who Benefit

The trickle-up nature of U.S. farm subsidies today can best be seen by examining some of the wealthiest farm subsidy recipients who walk the halls of Congress, live in large mansions, or enjoy Fortune 500 status. (See Table 1.)

Vote Yourself a Subsidy. Several Members of Congress--including some who sit on the agricultural committees that craft the subsidy programs--accept subsidies for interests they either own or co-own. For example:

Over that same five-year period, the median farm subsidy was just $4,675.16

Pork for the Fortunate. Among the multimillionaires and billionaires who cashed in on the farm subsidies during that period are:

Fortune 500 Fluff. The design of farm programs means that money also goes to major corporations, many of which have no significant commercial interest in farming. Several Fortune 500 companies receive farm subsidies. Though the dollar value may be small, and overlooked by stockholders and corporate officers alike, it is still much more money than most farmers receive:

Note: Amounts include properties in which the individual is only a partial owner.

Source: Data from the Environmental Working Group at www.ewg.org unless otherwise noted.

The Devastating Impact of Rising Food Prices on Americans