Most people, including journalists and policymakers, focus on the Labor Department’s official unemployment rate when assessing the health of job markets in America. This might have been warranted once, but today, the official unemployment rate does not accurately depict what is happening to American workers. That is because one is counted as unemployed only if one is not employed and is actively seeking a job (what economists call “labor force participation”). If things are so bad that you are not even looking for a job, the unemployment rate does not capture your despair.

Another measure does capture all potential workers regardless of their interest in working: the employment-to-population ratio (EPR for short). This is exactly what is says it is: a ratio of all people who say they have a job divided by the total number of people who could be working. Nonemployed people are captured by this statistic regardless of the reason why they do not hold a job. This measure therefore truly describes the state of the American labor market.

Because America is growing older as the large baby-boom generation ages, the EPR for the country will decline simply because more Americans have reached retirement age. Economists therefore like to focus on the EPR for people who are old enough that they have largely left school but young enough that they are unlikely to have retired. This group is known as the “prime working age” and covers people between 25 and 54 years old.

The data in the accompanying chart show the EPR over time for prime-working-age Americans over the past 46 years. It contains some short-term good news, but more important is the long-term bad news. This longer-term bad news helps to explain why so many Americans, especially native-born Americans without college degrees, are so angry about the state of the American economy.

The prime-age EPR peaked in 2000 when 81.5 percent of Americans between the ages of 25 and 54 held jobs. This capped an amazing two decades of employment growth in the United States. In 1982, at the depth of the recession of the early Reagan era, 88.4 million Americans were between ages 24 and 54, and the prime-age EPR stood at 73.5 percent. By 2000, the much higher prime-age EPR also applied to a much larger group: 120.7 million people. The math is straightforward: Between 1982 and 2000, America created 33.4 million new jobs for prime-age workers—more new jobs than there were people of any age in Canada at the time.

Since then, however, things have gotten much worse. The short-term good news is that the prime-age EPR has increased since the depths of the Great Recession in 2011. Back then, it was 75.1 percent; today, it is up to 77.9 percent. Americans are slowly coming back to work.

However, this short-term rise masks a 16-year decline. The prime-age EPR declined during the Bush presidency from the 81.5 percent he inherited to 79.9 percent in 2007, the year before the financial crash. Moreover, the number of Americans in prime-working years had risen to 125.7 million. A smaller employment rate applied to a larger group meant that there were about 2 million fewer Americans ages 25–54 working in 2007 than there would have been if the 2000 prime-age EPR had been regained.

The continued decline in the rate means that this “jobs gap” has grown. Baby-boomer aging coupled with reduced illegal immigration means that the number of 25-year-old to 54-year-old Americans is roughly unchanged from 2007 at 125.8 million. If the prime-age EPR were still at its 2000 high, nearly 4.5 million more Americans would have been working in 2016 than actually were. Imagine an America where 4.5 million more Americans in the prime of their lives were able to find the jobs they want.

If you can imagine that, you can imagine an America as buoyantly optimistic about itself and its role in the world as the America of 2000. You can also imagine an America where politics is less combustible and people are happier and more fulfilled. Close the jobs gap, and you start to make progress on reversing the anxiety and negativity that are rapidly infesting all of American public life.

Henry Olsen is a Senior Fellow at the Ethics and Public Policy Center and author of The Working Class Republican: Ronald Reagan and the Return of Blue-Collar Conservatism (HarperCollins, 2017). 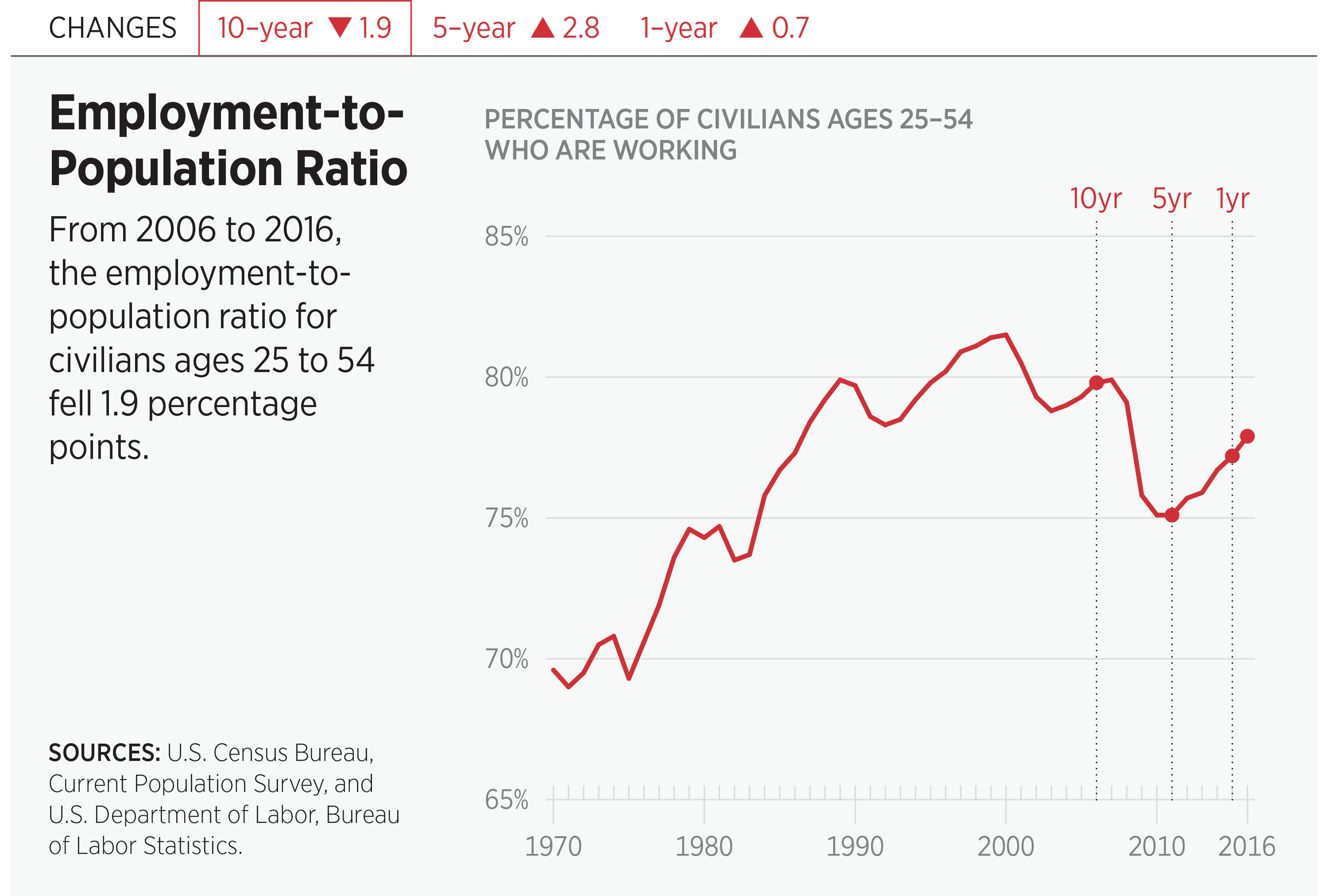