The rise in the number of Supplemental Nutrition Assistance Program (SNAP)1 recipients over the past five decades is dramatic, more than doubling since the 1980s and increasing 66 percent in the past 10 years alone. Perhaps encouraging is a reversal of this long-term trend since 2013, suggesting that fewer Americans are relying on food assistance from the government as the economy improves. Absent changes, can we expect SNAP caseloads to return to levels of the past? Most likely, the answer is no.

The reasons to expect relatively high SNAP caseloads for the foreseeable future can be attributed to two factors: the broader retreat from work by men and women in America and the inability of SNAP and other safety-net programs to counteract these declines. Unless reforms are made that lead to increased employment among adults in this nation, SNAP caseloads will remain high by historical standards.

The share of people not engaged at all in the labor market (and therefore not counted in the unemployment rate) remains above levels prior to the recession and reflects a longer-term declining trend. According to data from the Bureau of Labor Statistics, the labor force participation rate among prime-age men and women (25–54 years old) has declined three percentage points since 2000, accounting for millions fewer people working.2 Add to that an aging population less likely to work, and American households are turning increasingly to government programs such as SNAP to sustain themselves.

This retreat from work is evident in SNAP as well. Among adult SNAP recipients, approximately 64 percent are not elderly or disabled, suggesting that they are capable of work but lacking employment.3 According to data from the U.S. Department of Agriculture, approximately 35 percent of SNAP households with children and a work-able adult have no earned income. Among nonelderly, able-bodied adults without children, some 75 percent have no earnings.4

Americans should pay attention to these trends because they reflect government’s ability to increase economic opportunity for low-income households, not just reduce hunger and malnutrition by providing resources to purchase food. Research shows that SNAP has many health benefits for low-income families, 5 but when government programs replace rather than support employment, they do a disservice both to their participants and to the broader society.

In my experience working with SNAP recipients in New York City, they were grateful for assistance at a difficult time, but many expressed a desire for a job rather than a government handout. The long-term trend in SNAP raises concerns that it might be doing little to help these participants reach their ultimate goal of employment.

Although recent declines in SNAP receipt offer encouragement, longer-term trends still present some challenges. Policymakers and program administrators must recognize that employment also contributes to the health and well-being of families, and SNAP plays an important role. From this perspective, the success of SNAP should be measured not only by how much it reduces hunger and improves nutrition, but also by how well it supports and encourages work.

Employment among those who can work is the best path toward opportunity and a more prosperous society. All government safety-net programs, including the Supplemental Nutrition Assistance Program, should focus on this broader goal. 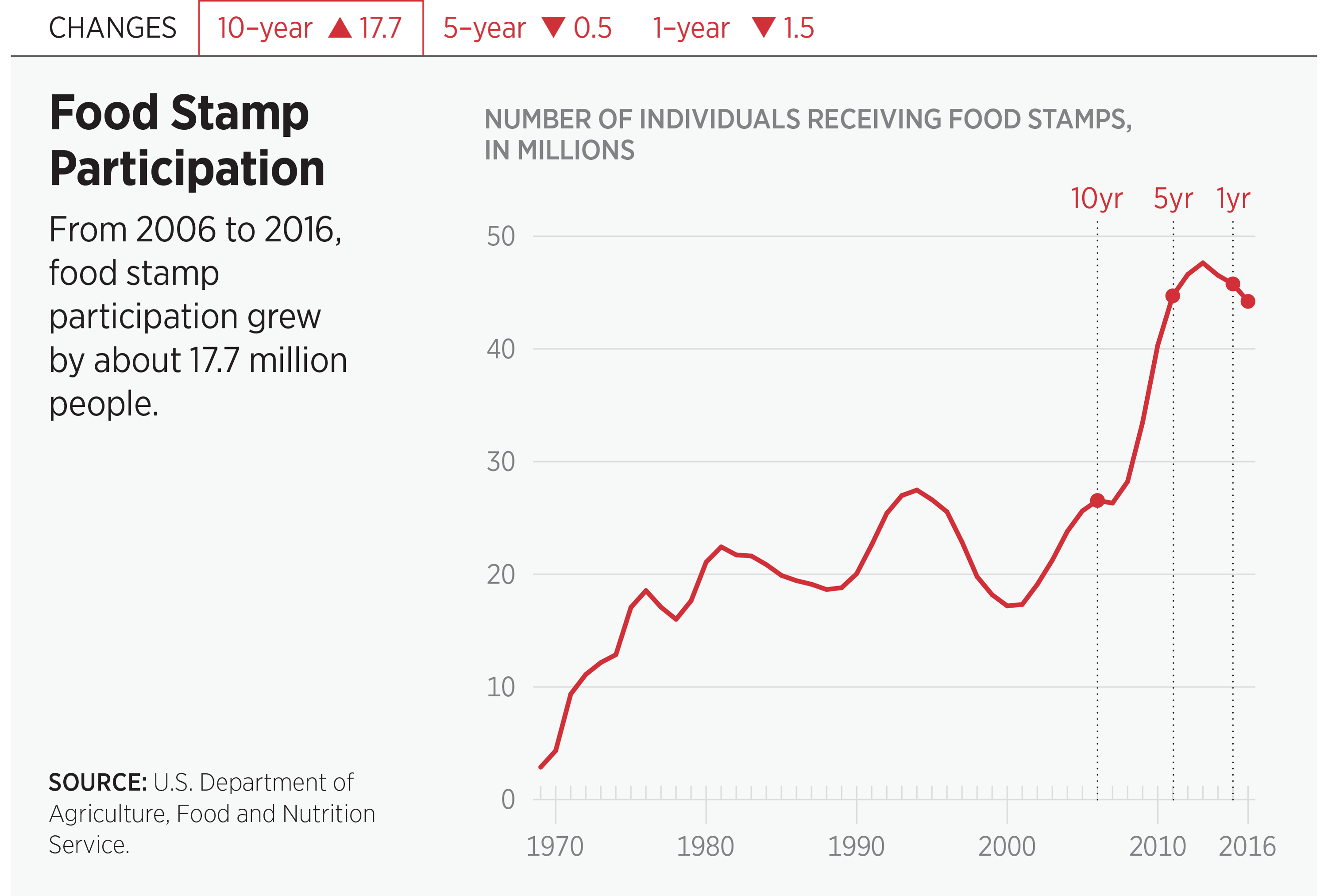