“Reading is fundamental” was a popular slogan when I was an elementary student in Los Angeles during the 1970s. Today, parents, teachers, and tutors stress the importance of literacy to public, private, home, and virtual school students. Reading is not only still fundamental; it is even more profoundly so than it was 40 years ago. Why? Our knowledge economy, economic self-sufficiency, and military soundness require a highly literate population.

To comprehend just how important reading is to American liberty, it is worth a look backward to see what our founding generation believed about literacy. The Founders’ decision to dissolve their bonds with England was a declaration for the liberty to learn as much as it was a declaration of political independence in 1776. Liberty is hollow without literacy. This is why education was so important. In fact, five legislatures—Pennsylvania (1776), North Carolina (1776), Georgia (1777), Massachusetts (1780), and New Hampshire (1784)—included education clauses in their constitutions before delegates to the Constitutional Convention approved a federal constitution in 1787.1

John Adams etched into the Massachusetts Constitution of 1780 that one advantage of education is “the preservation of [the people’s] rights and liberties.”2 At the same time, Abigail Adams in a letter dated August 14, 1776, reminded her husband John that “If we mean to have Heroes, Statesmen, and Philosophers, we should be learned women.”3 The enslaved Africans of colonial America believed reading was fundamental to freedom. Many of them learned to read in secret, with assistance from educated whites or blacks, or through makeshift schools.

Today, 241 years after our Declaration, we find ourselves living in a nation divided: people with higher-order reading skills and those without them. Unfortunately, too many adults and children live in the second category. This in no way means that people with low or no reading skills are doomed to failure. American history is replete with examples to the contrary. Nevertheless, reading matters. It affects a person’s earning potential, marriage prospects, housing options, and choice of school. Not surprisingly, parents matter to the education of children,4 and as goes the literacy of the individual and the family, so goes the well-being of a nation.

If our elementary and middle school students are doing poorly, what does NAEP tell us about our high school students? Researchers compared NAEP and international reading achievement data for members of the Class of 2015 in the U.S. and 33 Organization for Economic Cooperation and Development (OECD) countries.6 Only 33.5 percent of U.S. high school graduates scored proficient in reading. Massachusetts had the top U.S. proficiency score at 46.1 percent, while Louisiana, New Mexico, and Mississippi hovered at the bottom with 21 percent–22 percent. Overall, the U.S. ranked 18th among OECD nations; our students’ reading proficiency is higher than peers in Luxembourg, Italy, and Hungary but lags behind peers in Japan, Canada, and Israel.

Why are our reading proficiency scores so low? It is not because of money. Although money matters in education, federal spending on K–12 schools increased between 1970 and 2015, dramatically so during the 1990s, but NAEP reading scores remained relatively flat, as the accompanying graph shows.7

Are students from poor or less-educated families the culprits? Scholars compared reading scores of American students living in a household where one parent has a college degree—“high level” education—to similarly situated students in OECD nations. They relied on the percentage of students that scored at or above proficiency level in reading—a higher threshold than just proficiency. They found that in Poland, 62.6 percent of students reached the higher reading threshold compared to only 41.6 percent of American students. Put another way, 58.4 percent of our students from “high level” education homes did not score at or above proficiency. Overall, we ranked 22nd among OECD nations—behind Luxembourg and Hungary, two nations we beat when all students were included in the pool for achieving a lower-level reading threshold. We fared no better in math or science.8

Reading is fundamental to maintaining our nation’s economic self-sufficiency and military soundness. We need more literate people to compete successfully in the knowledge economy. Nearly 75 percent of Americans aged 17 to 24 do not qualify for our military because they did not complete high school, have a criminal record, or have health challenges.9 Even for high school graduates who took the Armed Services Vocational Aptitude Battery examination between 2004 and 2009, one in five failed to meet minimum academic requirements for enlistment in the Army.10

These results are not a recipe for protecting American liberty. Making reading really fundamental is.

Gerard Robinson is a Resident Fellow in Education Policy Studies at the American Enterprise Institute (AEI). 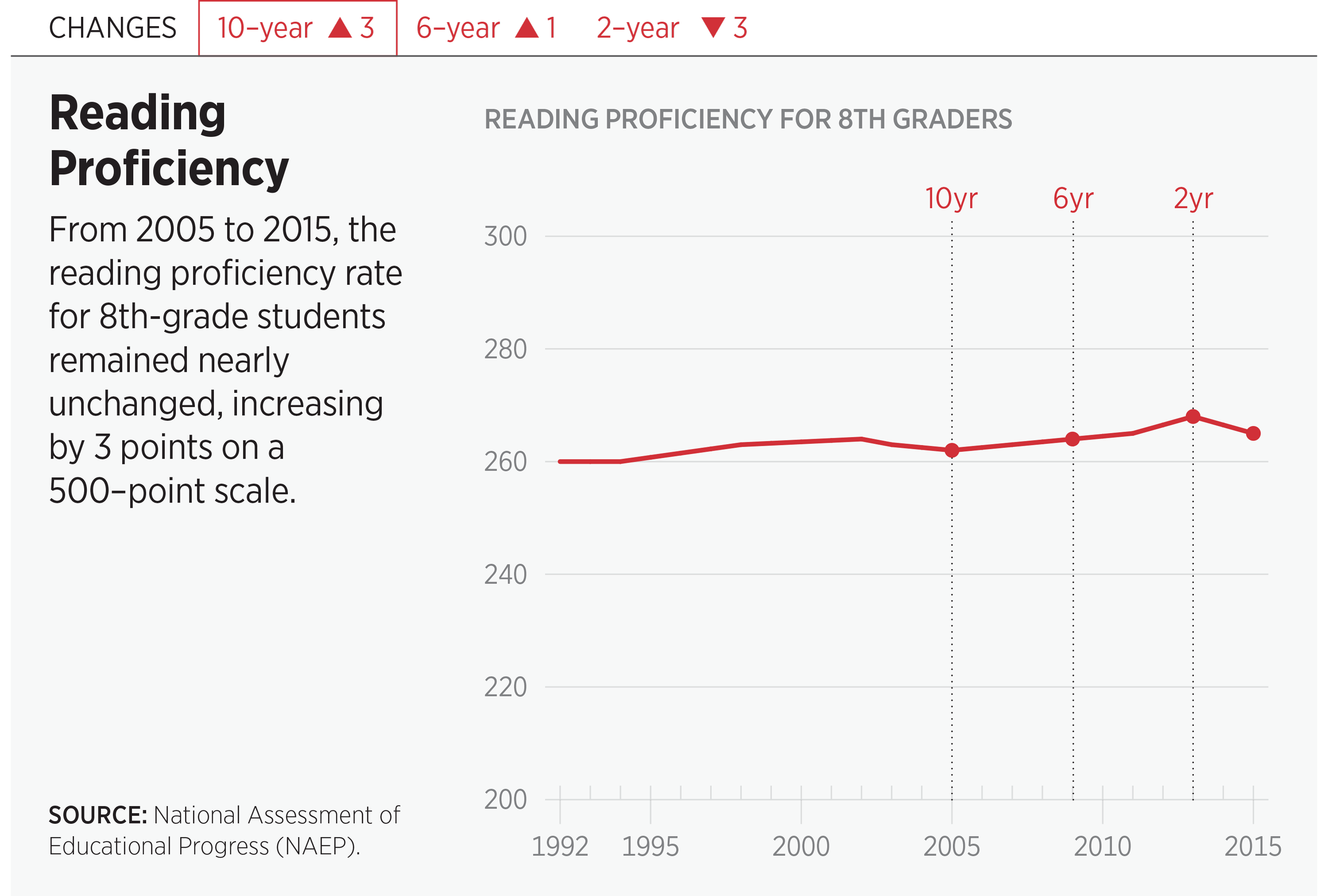 6. Eric A. Hanushek, Paul E. Peterson, and Ludger Woessmann, Not Just the Problems of Other People’s Children: U.S. Student Performance in Global Perspective, Harvard University Program on Education Policy and Governance and Education Next, PEPG Report No. 14-01, May 2014, https://www.hks.harvard.edu/pepg/PDF/Papers/PEPG14_01_NotJust.pdf (accessed April 17, 2017).

8. Hanushek et al., Not Just the Problems of Other People’s Children.