The labor force participation rate (LFPR) is a critical indicator for gauging both the health of our economy and the overall well-being of our society and families. This index tracks the proportion of people in any specified population who are in the workforce: that is, those who are engaged in paid labor plus those who are looking for work.1

A rising LFPR signifies a more economically active population with more would-be workers and thus typically also a more broadly generated flow of work income. Conversely, a declining LFPR means that a larger share of the population is out of the labor force altogether and thus dependent for support on other resources.

For the better part of the past two decades, America’s LFPR has been heading mainly in the wrong direction. Worrisome in and of itself, the decline in LFPRs also reflects and further exacerbates a multiplicity of additional social ills.

Since America is a nation characterized by constant and often dramatic demographic change, it is essential to use “apples-to-apples” comparisons in assessing trends in the LFPR.2 A key apples-to-apples population for such comparisons is the cohort aged 25–54, commonly known as the prime-working-age population. It should be self-evident why this group matters so much: It comprises the backbone of the workforce; it is the group in which, because of health and life-cycle considerations, labor force participation tends to be highest; and it is the group that is arguably most central to family formation and the raising of children.

Unfortunately, according to the national employment information collected by the U.S. Bureau of Labor Statistics (BLS), LFPR trends for America’s prime-working-age population have been gradually worsening for quite some time.

If America today maintained the same prime-working-age LFPR it achieved two decades ago, nearly 5 million more men and women 25–54 years of age would be in the workforce. The implications for economic growth, family incomes, and the vibrancy of our communities would be significant.

So why are LFPR trends set on such a bad long-term course? In arithmetic terms, the answer is simple: The LFPR for prime-age males has been in ominous long-term decline since the mid-1960s.3 The collapse of work for men has taken on shocking dimensions: The employment-to-population ratio or “work rate” for prime age men is slightly lower today (2016) than it was in 1940 at the tail end of the Great Depression.

While “globalization” and structural changes in the economy no doubt have played some role, we should note that the decline in prime male LFPRs has been more dramatic in the U.S. than in most other rich Western societies affected by those same global economic forces. America’s uniquely huge “criminal class,” as some have called it, is surely part of the explanation as well: Today, an estimated 20 million men and women (overwhelmingly men) who are not behind bars have a felony conviction in their past.4 Also at play may be America’s various government disability benefit programs, which may inadvertently incentivize some working-age adults to subsist on these support programs instead of remaining in the workforce.5

Labor force participation rates for prime-age women are now following the same grim downward course that their prime male counterparts embarked upon several decades earlier. This is not because more women are having children; fertility levels in the U.S. have declined slightly over the past decade. The great postwar entry of women into the paid labor economy, however, was sufficiently powerful to compensate for this decline and continued to lift overall prime-age LFPRs through the 1970s, ’80s, and ’90s.

The long-term decline in America’s prime-working-age LFPR has several important implications. First, it demonstrates that America is nowhere close to “full employment,” regardless of what the “unemployment rate” may suggest. The unemployment rate is an increasingly misleading metric of labor market conditions because it does not take account of those who have left the labor force altogether—and today, there are three prime-age men neither working nor looking for work for each prime-age man who is technically “unemployed.” Second, the American economy has been underperforming for a very long time, not only during the Obama era, but throughout the George W. Bush era as well.

The declining prime-age labor force participation rate has far-reaching consequences for our nation—virtually all of them bad. It leads to slower growth, wider income and wealth gaps, higher welfare dependence and government budget deficits, greater pressure on fragile families, and reduced social mobility. It is imperative that citizens and elected representatives focus on the bane of declining labor force participation and commit to turning this indicator around. 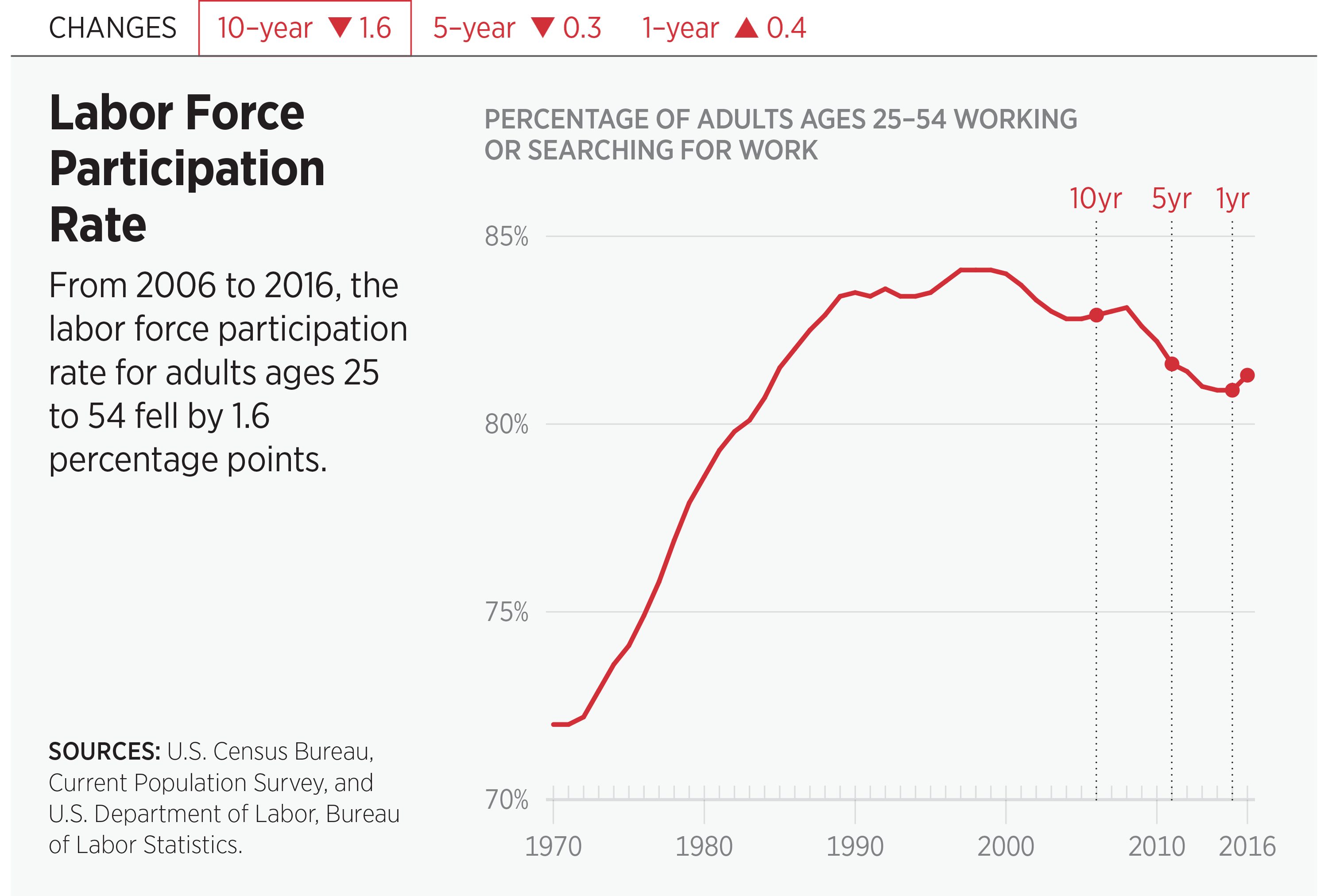 1. More precisely, the LFPR is estimated for the civilian non-institutional population rather than the total population. Thus, it excludes persons in the armed services as well as persons behind bars, in nursing homes, etc.
2. It would be misleading, for example, to compare the LFPR for the 16+ population in the early postwar era with today’s: Not only is a much larger share of today’s youth population out of the workforce due to the expansion of higher education, but the fraction of the adult population comprised of people of traditional retirement ages (65 years and older) is also considerably larger than in earlier decades. All other things being equal, we would therefore expect educational expansion and population aging to reduce the measured LFPR for the 16+ population.
3. This problem is examined in detail in the author’s recent study Men Without Work: America’s Invisible Crisis (West Conshohocken, PA: Templeton Press, 2016).
4. Ibid., pp. 129–148.
5. Ibid., pp. 110–128.

Can America Regain Its Entrepreneurial Mojo?