Last year marked the 20th anniversary of welfare reform, the Temporary Assistance for Needy Families (TANF) program. This law was historic because for the first time in modern history, a social welfare program was reformed so that it would actually help recipients move up the economic ladder. Its goal was not only to provide fiscal assistance, but also to help people find jobs and gain skills to increase their long-term employability. Within 10 years of reform, TANF helped more than 2.7 million families to move into jobs and toward self-sufficiency.1 No other social welfare reform has seen this kind of success.

Over the years, the original work requirement embedded in TANF has been eroded. States have found loopholes and claim credit for placing people in jobs when all they have really done is game the system. Regulations during the Obama Administration shrank the work requirement by allowing states to receive credit for work simply by spending more of their own state dollars on social services. They also allow states to claim credit for efforts by nonprofits and other groups to aid the poor.2

Furthermore, the Obama Administration sought in effect to eliminate the work requirement by allowing states a waiver if they had an “alternative” plan to promote work and job preparation. By using multiple loopholes, states have artificially inflated their work rates, which explains recent gains in the work rate.

In the typical state, nearly half of the work-eligible TANF caseload is completely idle. Another 39 percent is employed; however, this employment is generally not the result of positive efforts by state welfare agencies to reduce dependence and promote work. Instead, most states have simply expanded program eligibility to allow families with part-time or low-wage employment to receive partial TANF benefits. In most cases, the state welfare agency has done little or nothing to prompt this employment.

Finally, 13 percent of work-eligible TANF recipients are engaged in “work activation” to generate future employment. This includes training, job preparation, community service, and monitored job search. Work activation should be the core TANF operation, but in most states, it is rare.

Even worse, states have proven adept at creating statistical gimmicks to create the false impression that they are aggressively promoting work. For example, in 2015, California created a new policy offering a token TANF payment of $10 per month to 175,000 low-income families, nearly all of whom were already employed.3 The addition of these token payment families to the California TANF rolls caused the state’s TANF “work participation rate” to nearly double between 2014 and 2015.

The surge in “work” in California was so large that it raised the national work participation figures for 2015 shown in the accompanying chart. An estimated 11 more states also use token payment schemes to game the system and manipulate their apparent TANF work rates.4 If the misleading data from these states are removed, the actual national TANF work participation rate in 2015 (shown in the chart) falls from 48 percent to around 29 percent.5

It is clear that states are doing the bare minimum to engage able-bodied adults in finding employment. This is a far cry from the initial reaction states had to the new TANF law in 1996. At first, they stepped up to the plate and met the challenge by turning social workers into job-assistance managers. They found employers in their states and contracted with them to provide skill-training and employment opportunities. They also contracted with well-respected nonprofit entities, such as the Salvation Army, to help find jobs for their able-bodied beneficiaries, including those with mild disabilities.

It is time to right this ship and correct its course. Any TANF reauthorization should close the loopholes in the work requirement, rescind the Obama-era antiwork provisions, and put stronger work requirements in place requiring nearly all able-bodied adults to perform at least some kind of work or job-preparation activity.

Further, the example of the TANF work requirement should be expanded and replicated throughout the federal welfare system, which now extends to over 80 other means-tested programs. Their goals should not simply be to provide some kind of temporary aid, such as food stamps, but rather to help individuals and families move toward economic freedom and employment.

Katherine Bradley is a Visiting Research Fellow in the Institute for Family, Community, and Opportunity at The Heritage Foundation.

Robert Rector is a Senior Research Fellow in the Institute for Family, Community, and Opportunity at The Heritage Foundation. 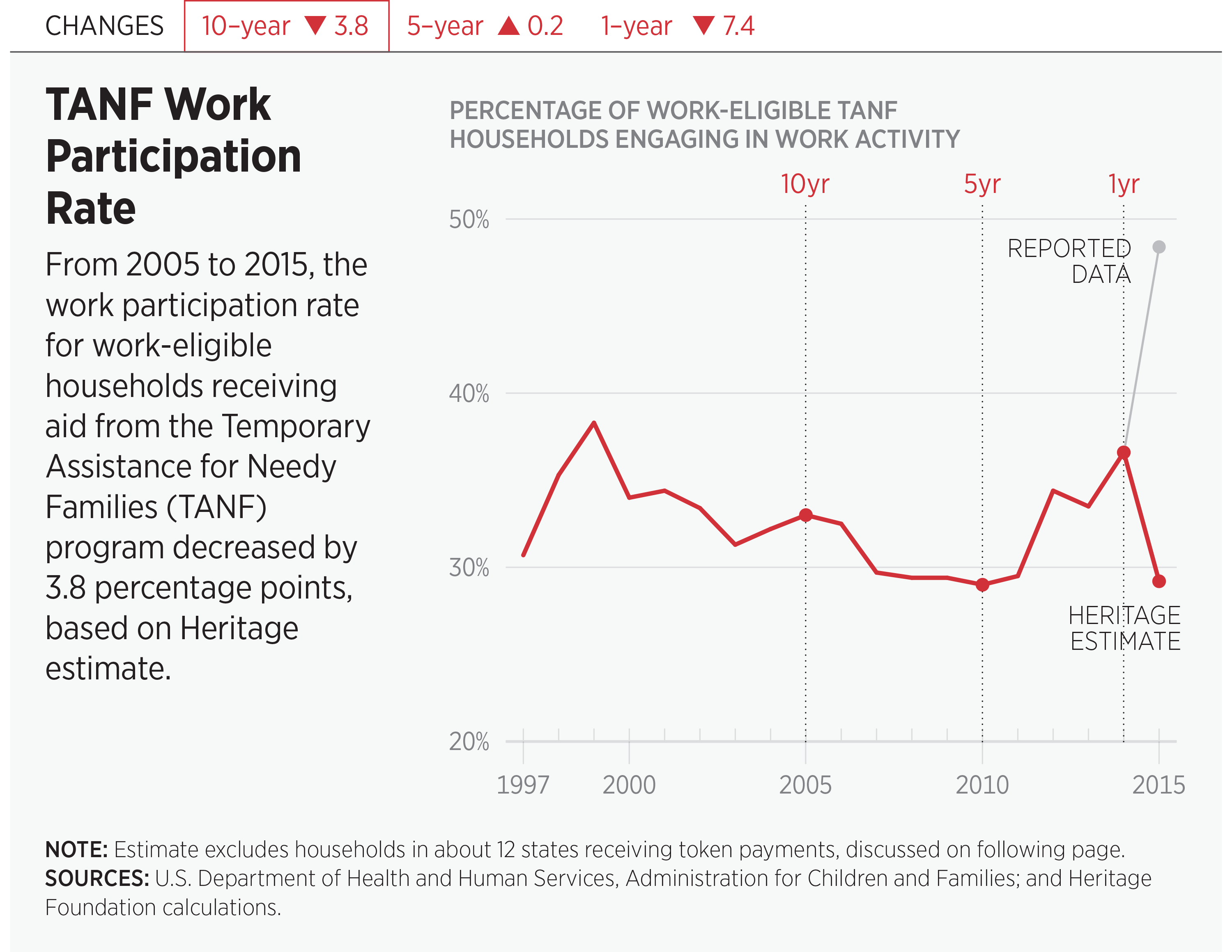 5. The official TANF work rate measures the share of TANF families with a work-eligible adult that engage in approved activities on average for at least 30 hours per week.