Divorce is not in the news today as often as it was in the past, although rates remain stubbornly high. Gone are the frequent reports of the 1990s and early 2000s about the mounting evidence of divorce’s effects on children and communities. Capturing the headlines instead is the rise of practices and habits associated with a greater likelihood of divorce. Unless we understand and respond to these practices and habits, it is unlikely that we will get sufficient traction in the important work of reducing America’s divorce rates and the misery often associated with divorce.

Lifelong marriage is not rocket science, but neither is it child’s play. It requires patience, discipline, kindness, practical realism, commitment to the value of commitment, and habits that reinforce these skills and attitudes. It is no wonder, therefore, that studies continually show a negative relationship between enduring marriage and such practices as cohabitation, premarital sexual relations, premarital childbearing, and pornography. It is also no wonder that young people from households without stable marriage role-modeling struggle to attain “’til-death-do-us-part” marriages for themselves.

Today, the majority of Americans cohabit before marriage, even though decades of research show a generally negative correlation with higher divorce rates.1 They cannot see past their own “logic” to the reality of cohabitation. “Testing” partners seems the safer path in a world of divorce. Substituting surveillance for the will to persist in love and sacrifice, however, becomes a way of thinking, even if the couple did not start with that mindset. Cohabiting couples are less likely to pool their resources or interact with extended family. As with the tendency to marry much later, cohabitation has become both a sign and a cause of an indisposition to commit.

Serial premarital sexual partnerships also undermine the opportunity for lifelong marriage.2 There is both good news and bad news here. Overall, even though fewer high school and college students report nonmarital sexual activity,3 Americans today have more prior partners than in the past.4 Vanishingly few enter marriage with no prior sexual partners (5 percent) or only their future spouse (22 percent).5 Yet rates of divorce are lowest for those with no or just one prior sexual partner.

Moreover, according to the U.S. Census Bureau, Americans are also marrying later (the median age is over 27 for women and nearly 30 for men), increasing the risk of nonmarital sexual partnerships and divorce, because delaying marrying until the early 30s is associated with a higher risk of marital breakup. In fact, for each year beyond 32, the odds of divorce increase by 5 percent per year on average. More Americans are bumping up against or breaking through this 30-something marriage age ceiling.6

We are racking up decades and generations of practices associated with the increased risk of divorce. Intergenerational and “grey” divorce rates (over 50 and over 65, respectively) are a growing fact of life. Despite occasional dissenters who insist that private sexual choices leave no wake, the empirical data point overwhelmingly in the opposite direction. Research also points to divorce as a source of female poverty and troubling economic and racial gaps.11

On the other hand, we know a lot more today about how divorce begins in a marriage and the tools that might curb it.12 We are beginning to collect helpful information about which marriage-strengthening programs work or don’t work and why.13 It is time again to incorporate this vast trove of knowledge directly into marriage education, political speech, public and private programs, and popular culture.

Helen M. Alvaré is a Professor of Law at the Antonin Scalia Law School at George Mason University. 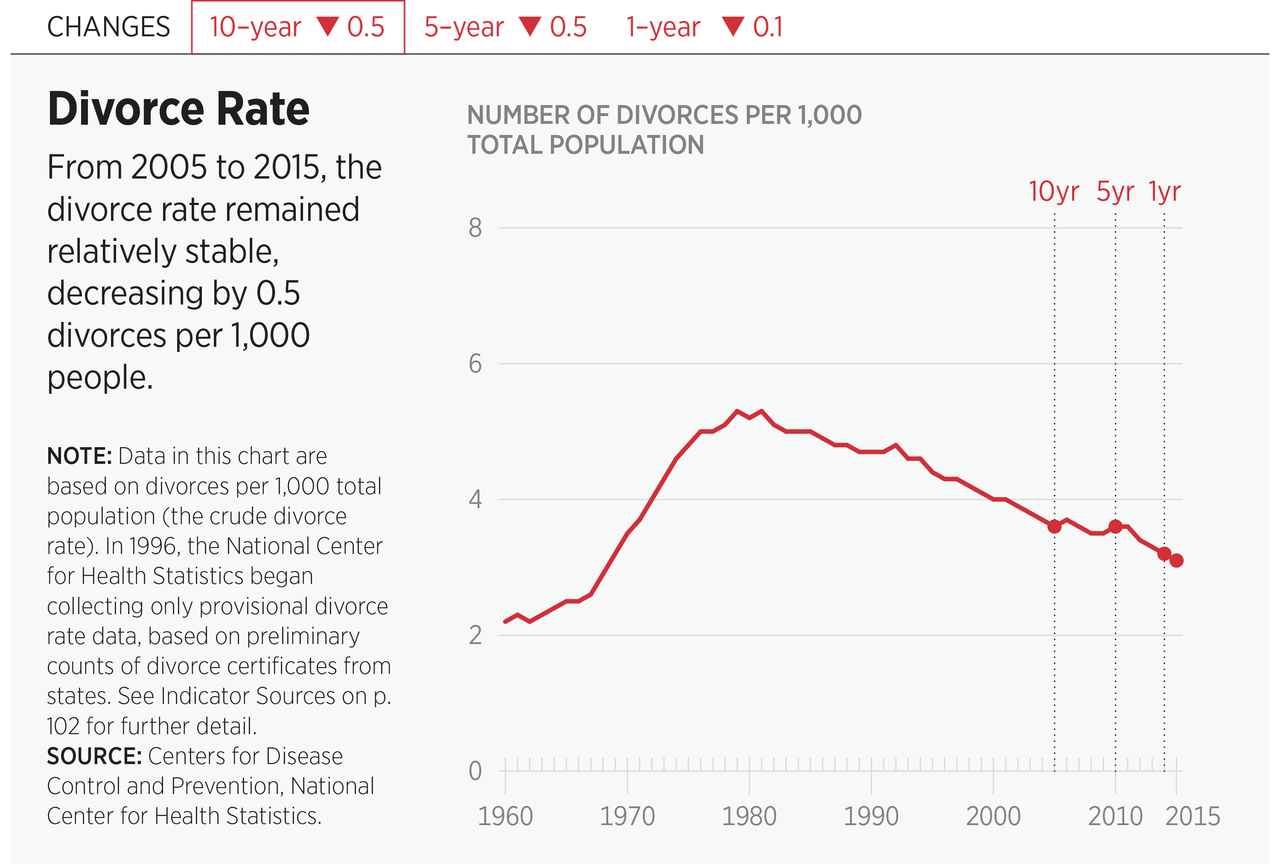 1. Scott Stanley, “Why Doesn’t Living Together Before Marriage Decrease the Risk of Divorce?” Institute for Family Studies,
August 4, 2014, https://ifstudies.org/blog/why-doesnt-living-together-before-marrying-decrease-the-risk-of-divorce/ (accessed April 17, 2017). Research does show that marital outcomes for individuals who have cohabited only with the person they marry, began to cohabit only after a clear understanding about plans to marry, or cohabited only after age 23 are similar to outcomes for those who have never cohabited.

5. Ibid. Only 22 percent of American women enter marriage having had only one sexual partner, in most cases, their future husband.

6. Nicholas H. Wolfinger, “Want to Avoid Divorce? Wait to Get Married, But Not Too Long,” Institute for Family Studies, July 16, 2015,
https://ifstudies.org/blog/want-to-avoid-divorce-wait-to-get-married-but-not-too-long/ (accessed April 25, 2017).