The long-term decline in church attendance should trouble even those who are not personally religious. At this point, the benefits of regular church attendance (or any other kind of religious observance), both societal and personal, are virtually impossible to dispute.

For starters, it can literally add years to your life—two to three, to be exact. Though no one knows exactly why this is the case, it is well documented.1 At least part of the reason is that it promotes healthier lifestyles. On average, regular churchgoers drink, smoke, and use recreational drugs less than non-churchgoers do. They are also less likely to engage in sexual promiscuity.

That is what churchgoers don’t do. As important, if not more important, is what they do. A few years ago, Stanford anthropologist T. M. Luhrmann, the author of When God Talks Back,2 told a story about a Bible study she attended while researching Evangelicals (specifically, members of Vineyard churches). When a member of the study tearfully told the group that she lacked $1,500 for a necessary dental procedure, Luhrmann was amazed that the group paid for the procedure anonymously.3

Luhrmann may have been amazed, but I suspect that regular churchgoers are not. One of the characteristics of regular churchgoing is that it increases social ties and strengthens already existing ones. In other words, churchgoing creates communities that become the means by which people take care of another, as happened in the Bible study described by Luhrmann.

Then there is the effect of churchgoing on children. In his book Our Kids: The American Dream in Crisis, sociologist Robert Putnam writes, “Compared to their unchurched peers, youth who are involved in a religious organization take tougher courses, get higher grades and test scores, and are less likely to drop out of high school.”4 They also “have better relations with their parents and other adults, have more friendships with high-performing peers, are more involved in sports and other extracurricular activities.”5 In fact, family churchgoing is so beneficial to academic performance that “a child whose parents attend church regularly is 40 to 50 percent more likely to go on to college than a matched child of nonattenders.”6

Moreover, this is true regardless of socioeconomic status. The problem is that regular church attendance is increasingly tied to socioeconomic status. According to Putnam, while “weekly church attendance” among college-educated families since the late 1970s has remained more or less the same, it has dropped by almost a third among those with a high school diploma or less. The result is “a substantial class gap that did not exist” 50 years ago.7 It is yet another way that poorer children are falling behind their more affluent counterparts.

Churchgoing benefits those outside of the church as well. A recent study by Brian and Melissa Grim of Georgetown University and the Newseum Institute, respectively, found that the “value of the services provided by religious organizations and the impact religion has on a number of important American businesses” totals $1.2 trillion, roughly equivalent to the GDP of Australia.8

Thus, regular church attendance and religious observance are good both for individuals and for society as a whole. Unfortunately, this suggests that the opposite is also true: Fewer people going to church is not good news either for individuals or for their communities.

In a sad irony, this decline is most visible in vulnerable communities of the sort described by Charles Murray in his 2012 book Coming Apart.9 In the poorer, less-educated communities that he calls “Fishtown,” what Murray calls the “religiously disengaged” have become the majority. While the label “religiously disengaged” does not mean that they are not morally upright—many of them are—it does mean that as a group, they do not generate the same level of social capital (i.e., social relationships that produce benefits) that the churchgoing population generates.10

Thus, whether they realize it or not, those who are vulnerable and whose personal “margin for error” is already very thin are making their already precarious situation even more precarious by not attending church. If the goal of a good society is to produce people who can take advantage of opportunities for personal and familial advancement, then the decline in church attendance, which, as Murray notes, is most concentrated in poorer communities, will only make things worse.

John Stonestreet is President of the Colson Center for Christian Worldview and co-host of BreakPoint, a daily national commentary on faith and culture. 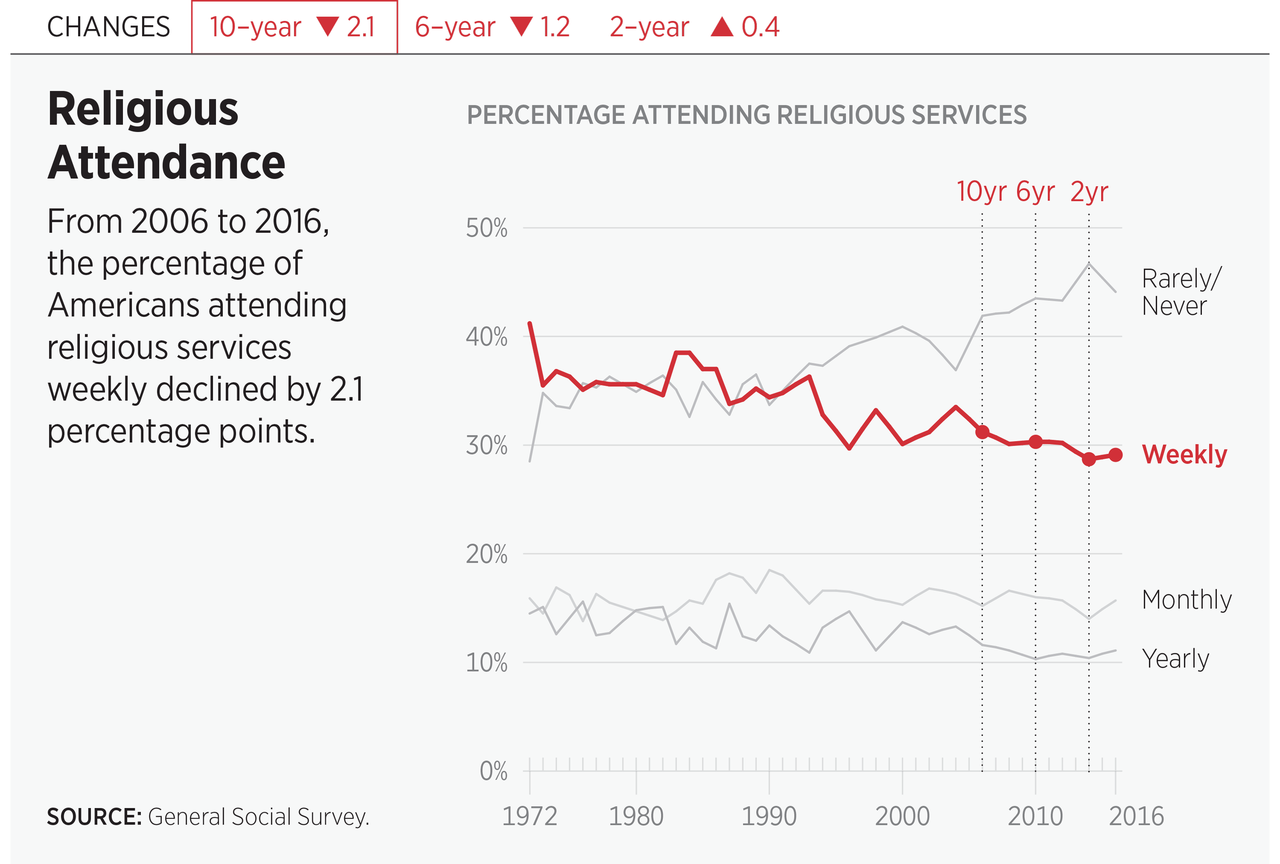