Jon stepped into my office with a confident stride that fits his tall, lanky, middle-aged frame. Men his size often intimidate, but the ease that accompanied him brought a peace into the room. He held a cup of coffee, and I’m not sure why, but the steadiness of his hand caught my attention more than anything else.

A year ago, Jon would have tremored. A year ago, he was a different man. Now, weeks away from graduating from our yearlong recovery and work-ready program, that homeless man I first met seemed to have been replaced with the one God had always intended. His visit that day was not to further process the abuse he had suffered as a child or the murder he had witnessed when he was 11 or to discuss where he was in his addiction recovery process. He just wanted to touch base, say hello, and see how I was doing.

In our casual connection that day, Jon shared with me what had helped him the most. “It wasn’t the classes you sent me through,” he said. “It wasn’t the computer literacy certification, the physical wellness, or the job training. It’s my mentor that’s made the biggest difference for me.”

Like every other student in our program, Jon was connected to a mentor committed to building a relationship over 40 weeks. This business executive has given an hour of his time every week to connect with, advise, and be a friend to Jon. A once chronically homeless addict is now a self-sufficient full-time employee, and he attributes his success mostly to a volunteer.

Volunteerism has been core to Watered Gardens Mission from its fledgling start 17 years ago. For the first 10 years, the mission grew exclusively by volunteerism. Today, volunteers fill more than 700 shifts every month, still providing the lifeblood of effort for the largest privately funded poverty relief work in our city. It changed Jon’s life, and he is just one among countless others.

So why is volunteerism on the decline? One might think the most charitable nation on Earth is losing compassion, that primary driving force to volunteer. If so, we had better understand the word. From its Latin roots—cum passus, or “to suffer with”—compassion is the visceral response that compels one to extend a portion of his life to help another who is in need. In fact, the Greek form found throughout New Testament Scripture means literally “from the bowel.”

That empathetic ache of the soul that drove Christ to act is the same force that compels millions of volunteers in America every day to extend a portion of their abundant lives to aid lives that are less abundant. Compassion is the instinctive response to another’s suffering and serves to fuel true charity.

Because we are godly image-bearers, the capacity for compassion is ever-present in humanity, but it is evoked from dormancy only in response to the awareness of another’s plight. Simply put, if we are not aware, we will not care, and if we don’t care, we are certainly less likely to volunteer.

Whether intentional or inadvertent, this is the effect of the efforts of central planners, who aim to socially engineer success for all through wealth redistribution but instead obstruct the natural formation of relationships between those who have and those who don’t have. Where volunteerism is a step toward right solidarity with our struggling fellow man, a welfare state that can only subsidize physical need creates dependence on one hand and paternalism on the other. The citizens of such a divided society, in which subsidiarity is grossly trespassed, become less aware of neighbors in need and much less likely to volunteer help: When we are not aware, we will not care.

America is not losing compassion. It is just being crowded out.

Recent research that argues against a crowd-out condition fails to control for the disenfranchising effect of regulatory requirements and not-for-profits that masquerade as true charities but spend more time at state capitols lobbying for funds than they do at churches and civic groups recruiting for volunteers.

Finally, most researchers have not stood where I do to experience it firsthand. For nearly two decades, I have witnessed crowd-out clearly tied to government entitlements.

Jon was offered quite an entitlement package: HUD housing, early SSI disability, food stamps. He was enticed to settle into a workless and dependent life. He admits that turning that down for a life of work and self-reliance instead was one of the hardest things he has ever done.

Had Jon succumbed, he would never have met or built a relationship with that compassionate volunteer who encouraged him on to success—just one volunteer in a cause-driven army of compassionate soldiers, all willing to serve well at their own expense. We would be wise not to crowd them out. 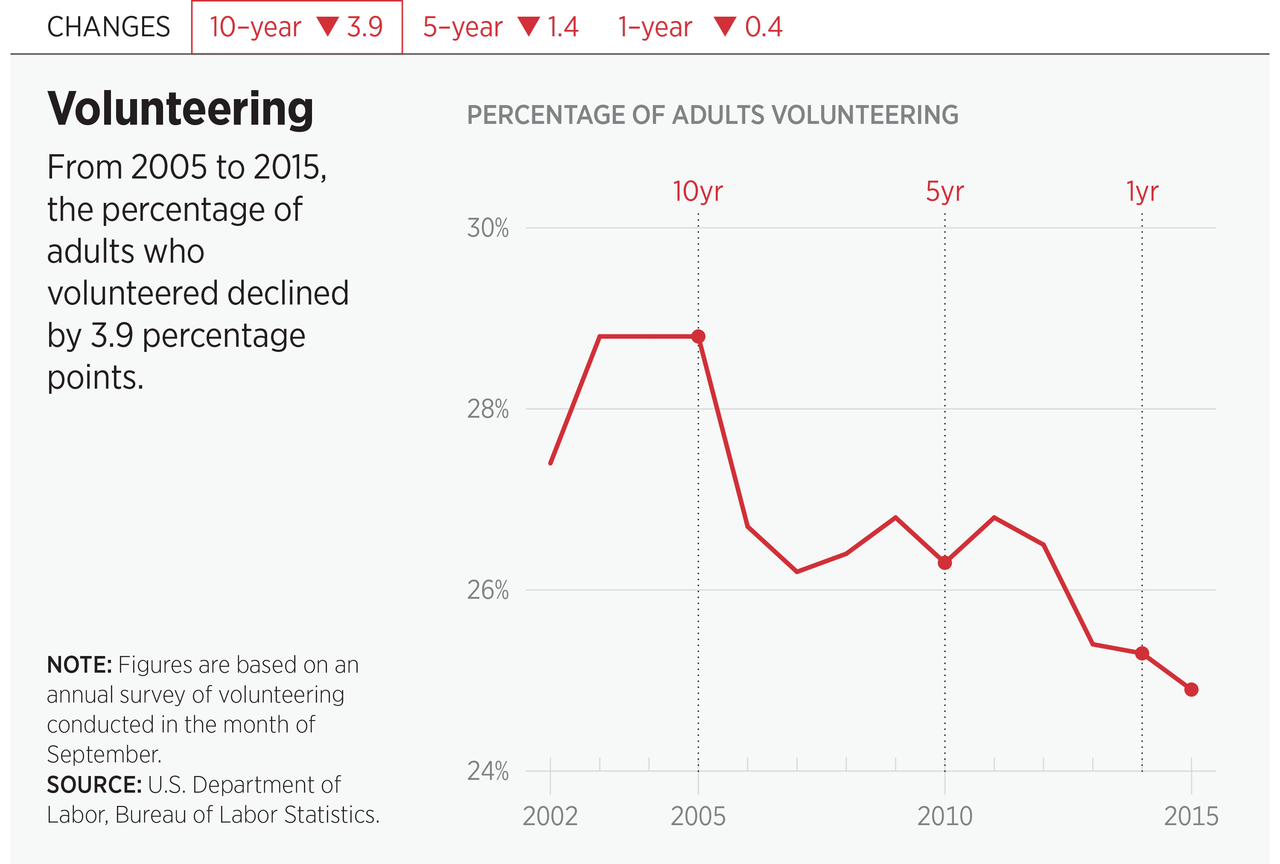 Indicators included in this report are illustrative and not a direct or...