Download the Report
Heritage.org
An Assessment of U.S. Military Power

The Active Component of the U.S. military is two-thirds the size it should be, operates equipment that is older than it should be, and is burdened by readiness levels that are more problematic than they should be. Some progress has been made, but it has been made at the expense of both capacity and modernization. Accordingly, this Index assesses the: 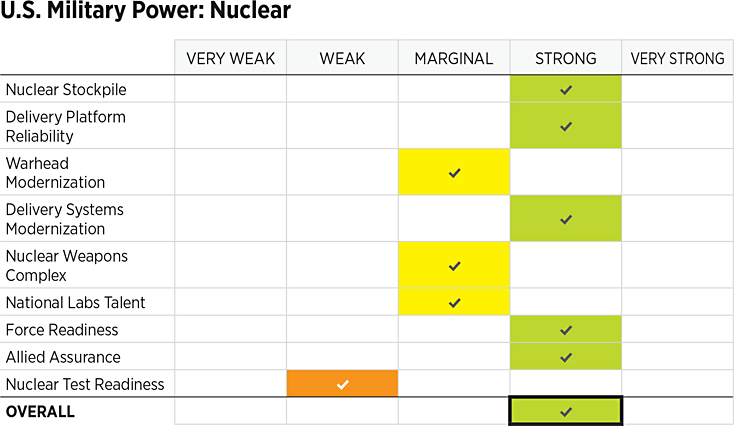 In the aggregate, the United States’ military posture is rated “marginal.” The 2022 Index concludes that the current U.S. military force is likely capable of meeting the demands of a single major regional conflict while also attending to various presence and engagement activities but that it would be very hard-pressed to do more and certainly would be ill-equipped to handle two nearly simultaneous major regional contingencies.

In general, the military services have continued to prioritize readiness and have seen improvement over the past couple of years, but modernization programs continue to suffer as the failure of resources to keep pace with inflation leads to cancelations, truncation, or delay. The services have normalized the reduction in size and number of military units, and the forces remain well below the level they need to meet the two-MRC benchmark.

Mounting U.S. federal debt and creeping inflation will pressure defense accounts further at a time when competitor countries like China and Russia are redoubling their efforts to expand and improve their military forces. If it continues on this trajectory, the U.S. risks falling very short in its ability to secure its core national interests.

Executive Summary of the 2022 Index of U.S. Military Strength

As currently postured, the U.S. military continues to be only marginally able to meet the demands of defending America’s vital national interests.

At The Heritage Foundation, we have long recognized that one of the very few obligations the U.S. Constitution places on the federal government is to provide for the common defense.