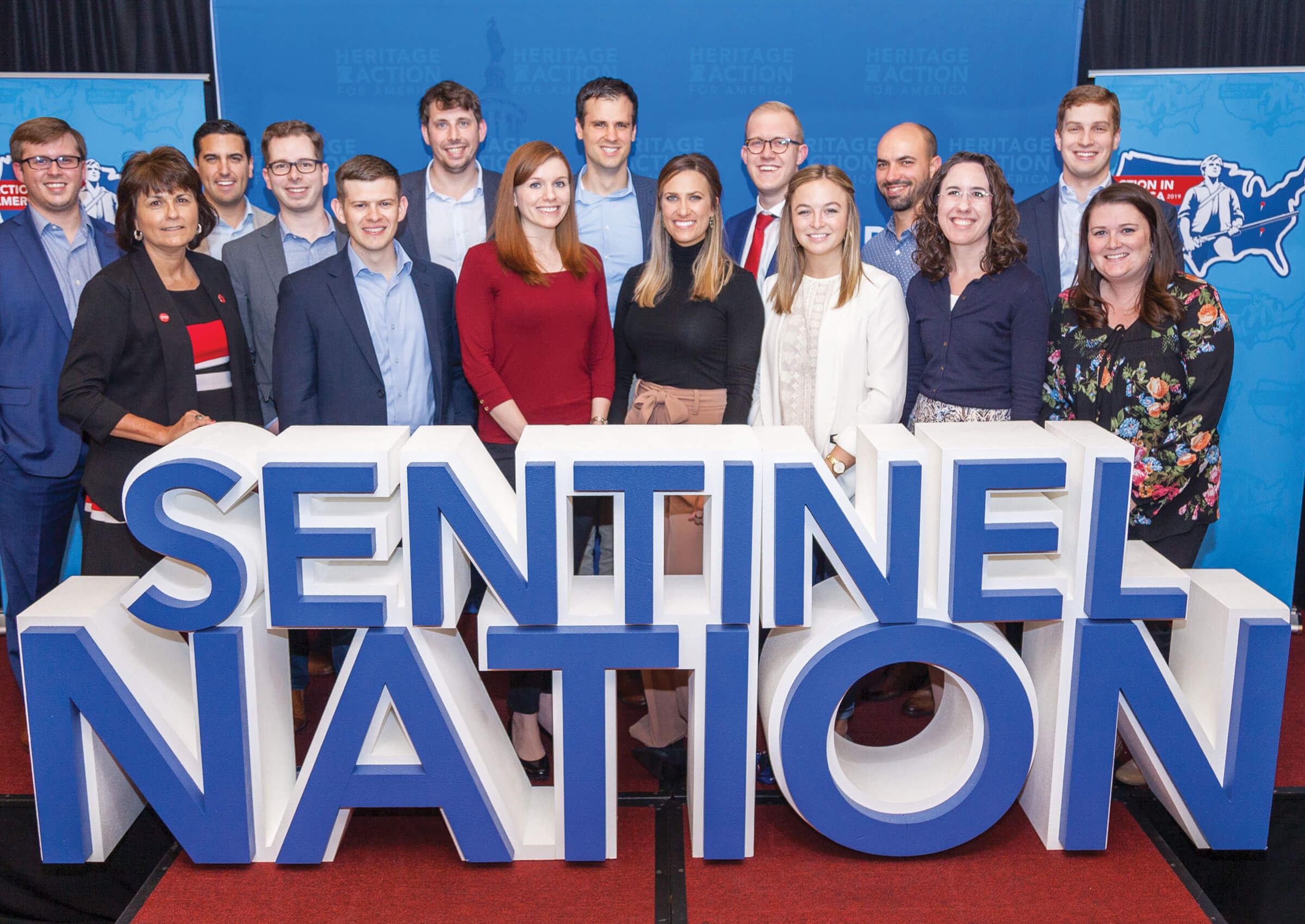 The Heritage Action for America staff at its Southeast Sentinel Summit, held in Atlanta on Nov. 9.

Heritage Action takes the innovative policy solutions developed by The Heritage Foundation and works to translate those into legislative victories.

To be successful, we deploy both an inside- and outside-the-Beltway strategy, putting policy in front of members of Congress and the American people. Ten years in, Heritage Action is strengthening and growing the conservative movement every day.

It’s never easy to keep the “big tent” conservative coalition together. It was particularly challenging in 2019—a divisive, contentious year in Washington.

With a new Congress and fresh problems facing our nation, Heritage Action decided to think long-term. Our grassroots team energized and enlarged our base of supporters and volunteers around the country, conservative activists we call Sentinels. This is a powerful group of over 20,000 committed grassroots activists who bring our policy recommendations back home to their communities and then engage directly with their representatives in Washington.

Meanwhile, our D.C.-based staff worked to advance our common-sense, conservative solutions among Capitol Hill staff as well as lawmakers. Finally, through our innovative polling project, we surveyed 4,500 Americans to match their policy interests with the work being done at The Heritage Foundation. Thanks to the hard work of all these individuals and initiatives, we found real success in 2019.

Over a four-month period, Heritage Action conducted a series of detailed public opinion surveys with one simple goal: to find out what issues can most animate conservatives and “somewhat conservatives” to join forces and advance our policies.

From these surveys we gained numerous insights about Americans’ real concerns and views. For instance, we learned that what Americans found most concerning about illegal immigration wasn’t violence, job losses, or cultural change—it was the overuse of social services such as Medicaid and public housing. We also found that an overwhelming majority of Americans—including substantial numbers in every party, region, and age group—reject extreme policies such as socialism, government-run health care, the radical pro-choice agenda, and many more. It was good news across the board: America is hungry for conservative solutions.

This polling led us to focus on four issue areas—immigration, culture, the workforce, and the economy. In each area, we have numerous policy recommendations that appeal to many individuals who don’t yet identify as conservative, but who should.

We shared all this information with stakeholders in Washington and with the American public. The media found our insights fascinating, and write-ups appeared on Fox News, USA Today, Politico, and more than 25 other influential media outlets. In addition, we briefed top staff from the White House policy and political team, the Office of Management and Budget, the Republican Study Committee, Senate GOP leadership, the National Republican Congressional Committee, and anyone else who would listen.

What we learned through our polling continues to shape policy and messaging throughout the conservative movement, from the White House to our grassroots activists around the country. By putting our finger on the pulse of the American voter, we are better able to push for conservative policies that meet the needs of Americans everywhere. 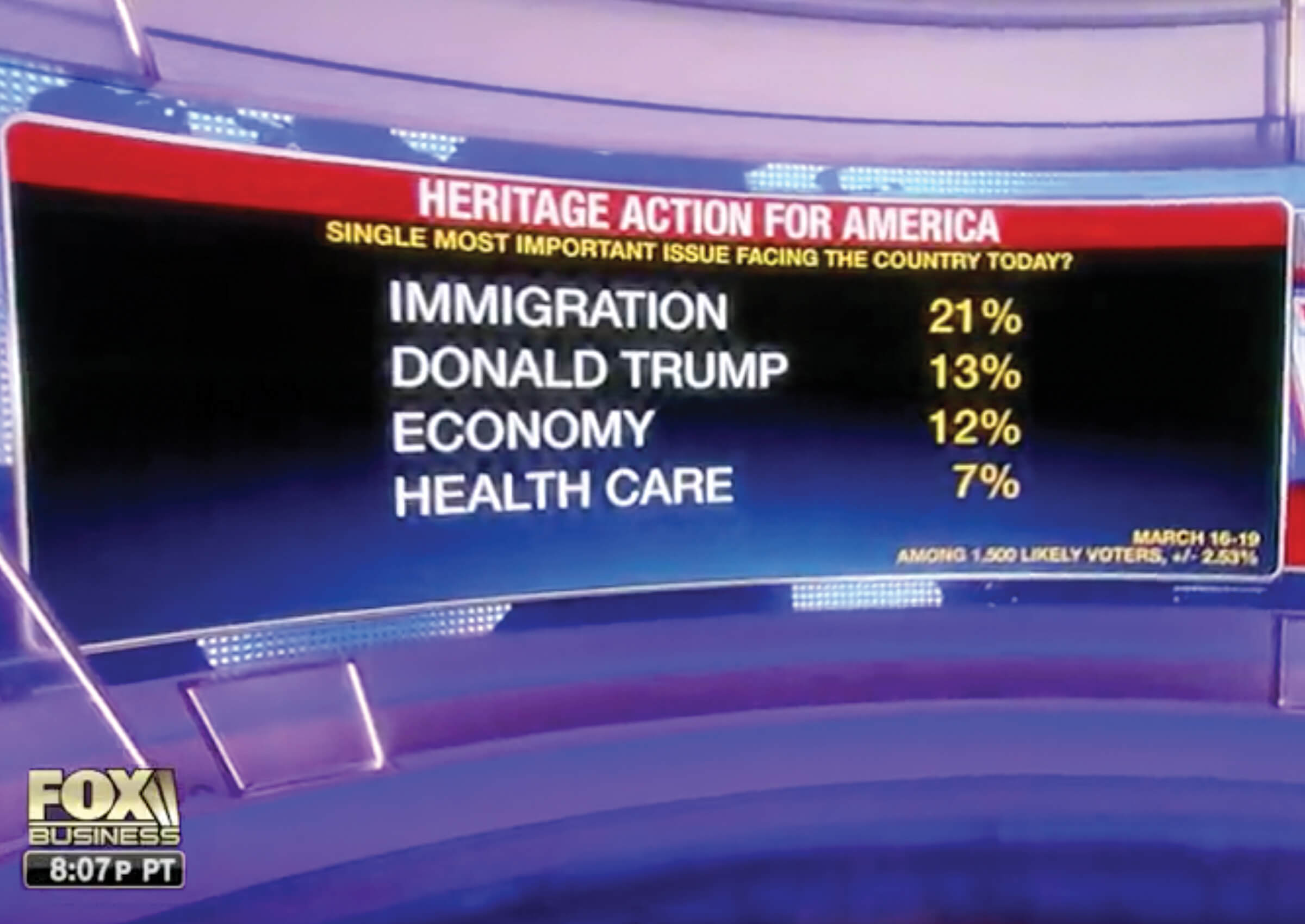 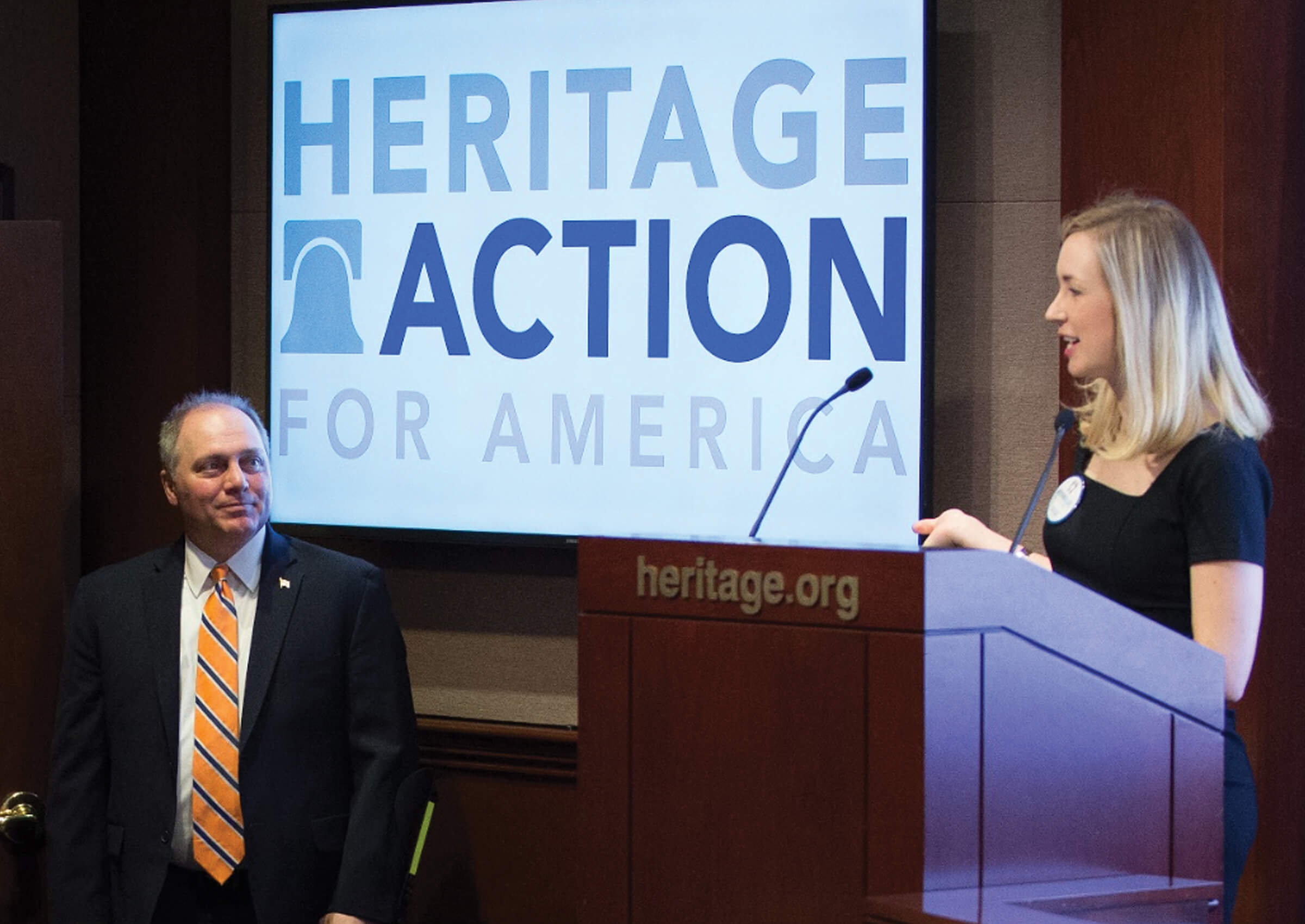 The immigration debate offers a great example of how our polling project put us on the road to policy victory. One key finding was that voters’ greatest concern with illegal immigration was the overuse of social services.

That was something we stressed over the course of several briefings at the White House. We recognized that, not only had this point been given too little attention in the public discussion of immigration, but there were practical actions the administration could take to address the issue—without having to get congressional approval.

Two months after our briefings, the administration took one such action: the White House updated the “public charge” rule. The rule provides that people seeking entry into the country may be denied admission if they will have to rely on government assistance. Enacted in the 19th century, the rule had been updated once—in 1999, when the Clinton administration ruled that potential immigrants could accept an unlimited amount of noncash welfare benefits. That update has since cost the U.S. untold billions of dollars. But thanks to the new public charge rule, those who receive a certain level of government welfare, or are determined likely to do so, are ineligible for permanent residency.

Heritage Action Executive Director Tim Chapman celebrated the victory with an op-ed in The Hill: “The administration’s rules will limit those who abuse our systems of welfare, amnesty, and law enforcement while encouraging those who want to come to this country and contribute to society—no-brainer policies to anyone who lives outside the D.C. bubble.”

Predictably, an activist judge issued a nationwide injunction to stop its enforcement. But in January 2020, the Supreme Court upheld the rule as constitutional. Heritage Action celebrated again: the deciding vote cast in the court’s 5-4 decision came from Heritage Action-backed Justice Brett Kavanaugh.

Heritage Action’s role in this victory was crucial. Our polling showed Americans’ real concerns with immigration, and we showed those concerns to key policymakers. Those policymakers created an effective rule—now affirmed as being constitutional—that will protect our nation’s social services and ensure new citizens are able to work and support themselves in America.

In February, Sen. Ben Sasse, R-Neb., reintroduced the Born-Alive Abortion Survivors Protection Act. It was in response to unsettling developments in Virginia, where lawmakers debated a bill permitting abortion until the moment of birth and Gov. Ralph Northam had seemingly endorsed infanticide in a radio interview.

Currently, federal law does not provide adequate protections for babies born alive after a botched abortion procedure, nor does it establish specific requirements of care on the part of practitioners. The Born-Alive Act would fix that and protect the rights of infants.

Heritage Action immediately got to work on this pro-life policy. On Feb. 18, we launched a campaign to build a bipartisan coalition of 218 lawmakers to sign a discharge petition, which would force a vote on the House floor. Representatives would then have to go on the record as supporting or opposing a child’s right to life (supporting or opposing infanticide). To get sufficient signatures on the petition, Heritage Action targeted 28 House districts with vulnerable Democratic lawmakers.

The ongoing campaign includes grassroots activism, informational meetings on the Hill, advertising, and a media push. Thus far, nearly half a million activists have worked on the issue and participated in rallies across the nation. In April, more than 60 Heritage Action Sentinels flew in to Washington, D.C., to personally lobby their members of Congress. By year’s end, we had amassed 204 signatures from both parties, just 14 short of the number needed to force a vote. This work, though not yet completed, will continue, as the discharge petition carries over to 2020.

Heritage Action’s leadership on this urgent issue has been recognized by U.S. News & World Report, Politico, Breitbart, Washington Examiner, and numerous radio stations. Thanks to the work of our team and supporters across the nation, along with other pro-life groups, the bill has become a top national issue, receiving numerous hearings in Congress and even the attention of President Trump, who spoke directly about the bill. Protecting life is one of the highest callings in politics, and Heritage Action is proud to be a part of it. 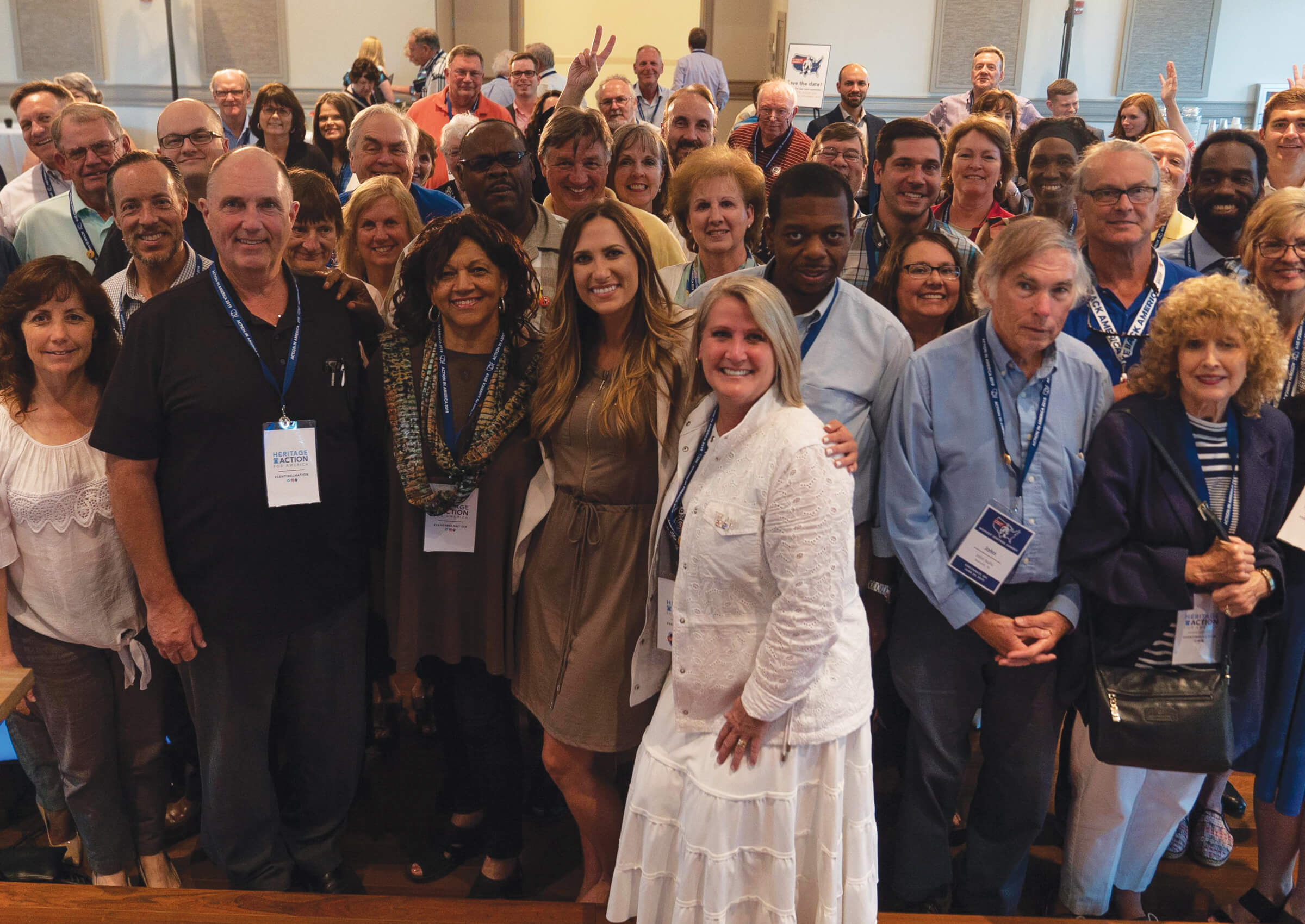 More than 100 Heritage Action Sentinels and staff attended the Ohio Sentinel Summit in Cincinnati, one of four regional Sentinel Summits convened in 2019. 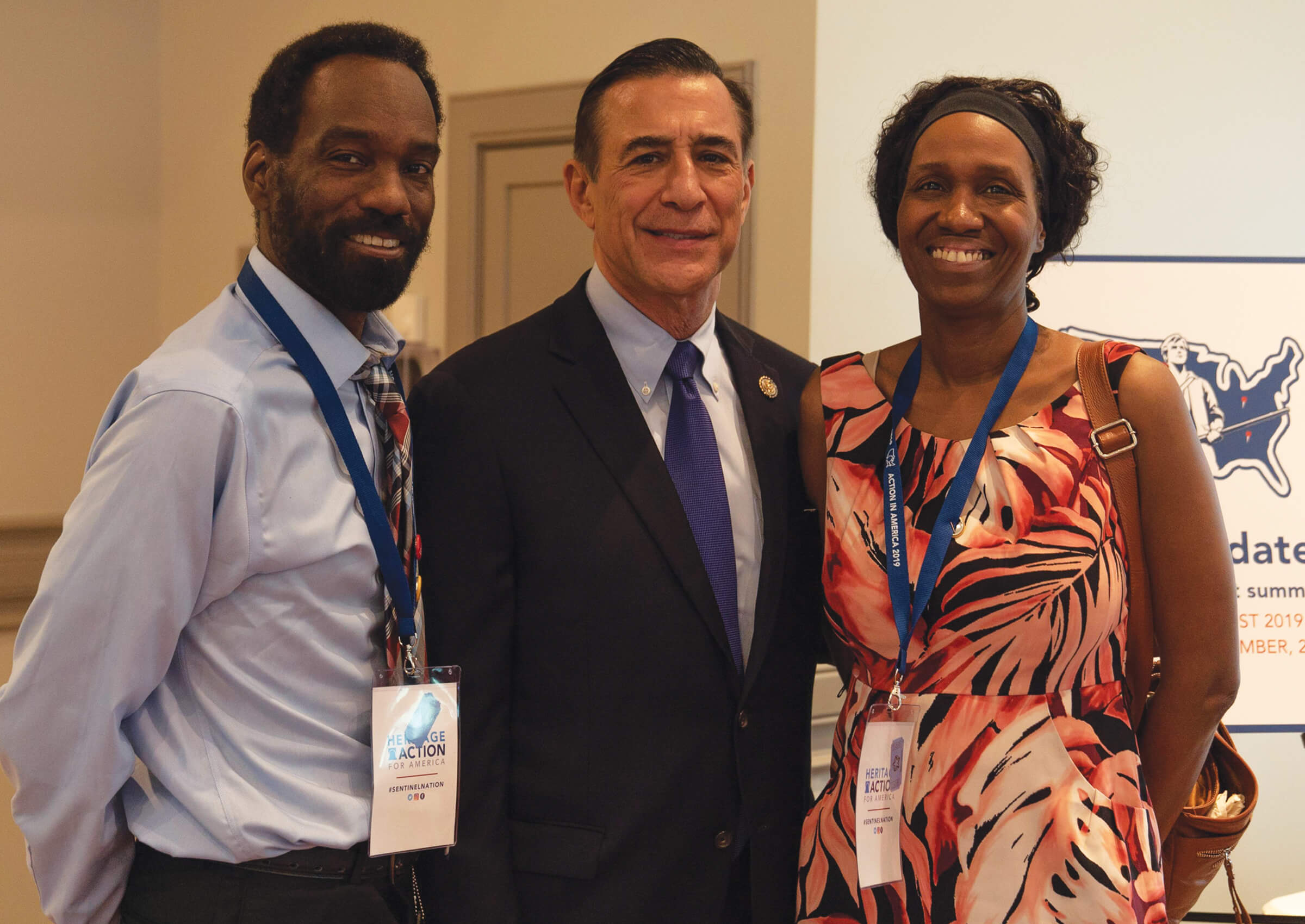 In September, after three years of threats and investigations against President Trump the Left finally began an impeachment effort. Early on, Heritage Action realized how partisan and unfounded this effort was, and we used every tool at our disposal to oppose the unfair process.

Chapman and Vice President Jessica Anderson spearheaded our drive to expose the process and get Congress back to work. They wrote articles for USA Today and The Hill, documenting the distraction and misdirection at the heart of the impeachment effort. Chapman made numerous appearances on Fox News to oppose the shameful motives behind the Left’s investigation.

When the partisans controlling the House pushed the process to impeachment and on to a Senate trial, Heritage Action key-voted against it—in both chambers. And as soon as the Senate votes were cast and the president was acquitted, Chapman issued a statement advising lawmakers on what to do next: “A dark chapter in our nation’s history is over. It’s time to turn the page. Now Congress can do what they were elected to do: get back to work.”

Heritage Action also worked to improve the lives of the poor in America. We know that work and healthy families are essential ingredients in lifting Americans out of poverty, so we pushed for the Jobs and Opportunity with Benefits and Services (JOBS) for Success Act. This commonsense bill would help people end their dependence on government and find meaningful employment by strengthening work requirements for the Temporary Assistance for Needy Families program.

Riven by bitter partisanship, this Congress has been extraordinarily divided, making it extremely difficult to build bipartisan consensus around any piece of legislation. This bill was no exception: it never made it out of the liberal-controlled House.

It did, however, accomplish something quite meaningful. After Heritage Action key-voted for co-sponsorship, 90 representatives and 3 senators signed on to the bill. That’s the largest showing of support for welfare reform in the 21st century.

It is yet another solid plank in a comprehensive policy platform that is unifying conservatives now and setting us up for real policy success in coming years.

Portions of this publication were provided by or relate to, and were paid for by, Heritage Action for America.

Heritage Action’s greatest assets are our grass roots, and we drew on those assets throughout the year. Three times in 2019, a large contingent of our activists flew in to D.C. to lobby their representatives. And when constituents care enough about an issue to fly in from “back home,” Capitol Hill pays attention.

The first fly-in focused exclusively on supporting the Born-Alive Abortion Survivors Protection Act. We flew in 65 Sentinels to visit 34 offices and let legislators know how firmly they support the bill. Their message was clear: The lives of infants are at stake, and it’s up to us to protect them.

During the fly-in, Sentinel Carol Polzin met with Rep. Collin Peterson, D-Minn., who represents the district next to hers. She urged him to stand up for the sanctity and dignity of human life and sign the discharge petition to bring the act to the House floor. That same afternoon, he signed it.

Our next two fly-ins brought together nearly 100 grassroots activists to lobby Congress on three specific issues: the JOBS for Success Act, the U.S.-Mexico- Canada trade pact, and the impeachment proceedings. Twenty-two representatives and senators heard from their own constituents about the importance of work and free markets and the need to stand firm against the partisan impeachment process. Our Sentinels also left the meetings feeling empowered—and knowing that they had gone the extra mile to promote principled, conservative action on Capitol Hill.